ARKANSAS SIGHTSEEING: Find your Muse at a country store in Heber Springs 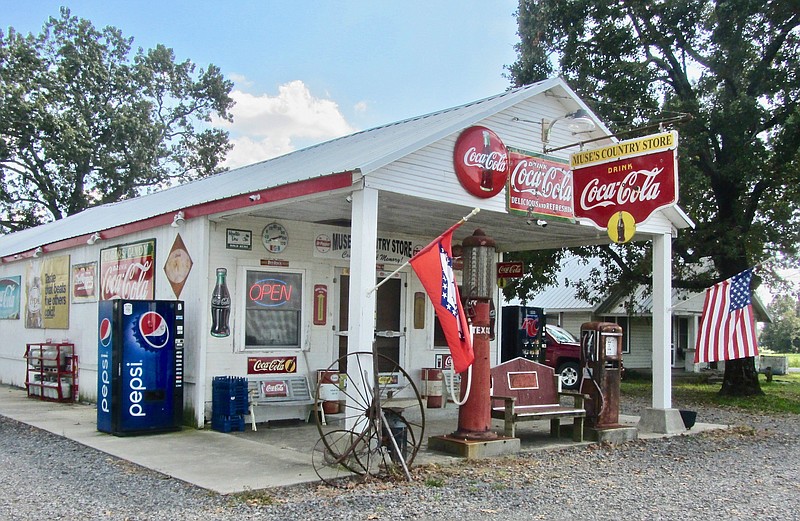 HEBER SPRINGS — The sign above the front door of Muse's Country Store sets the tone for the jumble of merchandise inside: "Come share a memory!"

Some of the enticing clutter are for sale. Some are for display. Most all of it is meant to activate smiles stirred by nostalgia from visitors who stop by the emporium along Arkansas 5 about 5 miles south of downtown Heber Springs.

Owner Scott Muse revived the store in 2017, seven decades after it was founded during the Great Depression. Back in the '30s, well before national chains proliferated, family-run country stores dotted rural and small-town America. Faded photographs displayed inside show the store with some of its earlier owners: Tedder, Young, Cagle Mullins, Frayser.

The Fraysers closed the store when they retired in 1986. "It was always a tough way to earn decent money," Muse says. "And you can't make a living anymore running a general store. For six months, I tried groceries, bread, eggs, milk. But that didn't work. I slimmed it down to mostly snacks and antiques — and my junk."

Muse, along with his wife and two children, moved to Heber Springs in 1999. Now 62, he remembers "driving by this place maybe a thousand times over the 16 years before I bought it. After all those years empty, it was barely standing. I said to myself, 'I'm gonna save that little store.'"

The impact of this year's coronavirus pandemic has significantly reduced the number of visitors to Muse's. But he professes to be only mildly concerned, adding that "you can call this a labor of love. I've done this so people can go back in time."

His extensive collection of automobile license plates posted on one wall can take viewers back to 1911, the first year that Arkansas produced them. Another wall displays city vehicle tags, once issued by municipalities around the state. A rarity is a 1919 tag from Argenta, today's North Little Rock.

Muse says that meeting visitors old enough to remember the store under its previous owners is one of his real pleasures. He cites an example of the memories they share:

"Some people talk about their childhood years when they rode the school bus. In the 1950s, say, that was a totally different world from today. The bus would swing through the turnaround here, and if you had a nickel or a dime, you could get off to buy a snack. The bus would continue to drop off more kids, and when the bus returned, you'd have to be sure to get back on.

"Then at Christmastime, on the last day of school before the holidays, the driver would buy all the kids on the bus a soda and a candy bar. That was for being good all fall."