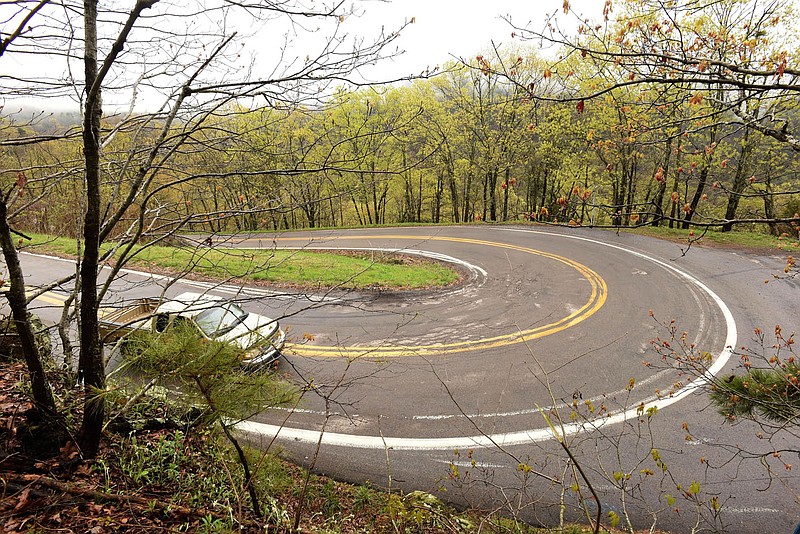 A picturesque stretch of Arkansas 103 between Oark and Clarksville, seen here on April 3 2020, features some serious switchbacks. Several miles of the highway through the Ozark National Forest and the Arkansas River valley make for a fun and scenic road trip. (NWA Democrat-Gazette/Flip Putthoff)

FORT SMITH -- The Western Arkansas Intermodal Authority gave the green light on proposals for two projects that are necessary to move forward with a much larger undertaking in the River Valley.

The authority's board of directors approved environmental site review and permitting and preliminary engineering and design proposals during a special meeting on Monday. The funding for these projects will come from a $450,000 matching grant it received from the Economic Development Administration to help develop an inland port and multimodal facility on the Arkansas River in Crawford County.

"We are going to have our first private meeting this week, so I will call them and get that for sure set up since we've had the approvals," said Sasha Grist, executive director of the Western Arkansas Planning and Development District.

The proposal from FTN Associates stated that the company's total fee for basic services it outlined will not exceed $72,000 without the intermodal authority's prior approval. Additional services may also be furnished at the authority's request on a time and materials basis beyond this budget.

In its proposal, Pickering Firm stated that it would complete the work in its scope of basic services on a fixed-fee basis, listing a lump-sum fee of $290,000.

During the board's meeting on Oct. 14, Pitsch said the Western Arkansas Planning and Development District went through a process of generating leads for the requests for quotes on the environmental review, -- which had been started, but not finished, by the U.S. Army Corps of Engineers -- and for the engineering study.

The board approved an intergovernmental agreement involving the authority, Fort Smith and Van Buren, and Sebastian and Crawford counties on Dec. 18 regarding submission for the grant. Eighty percent of the total funding of the proposed project, $360,000, would come from the Economic Development Administration grant. The local match of $90,000 would be split evenly among the four governmental entities, with each contributing $22,500.

On July 8, the board approved an administrative contract for the grant between the authority and the Western Arkansas Planning and Development District. Grist has said this contract signifies that the district would administer the grant for the intermodal authority.

Pitsch said in July that all environmental permitting and design has to be finished before the authority can move to the next phase of construction.