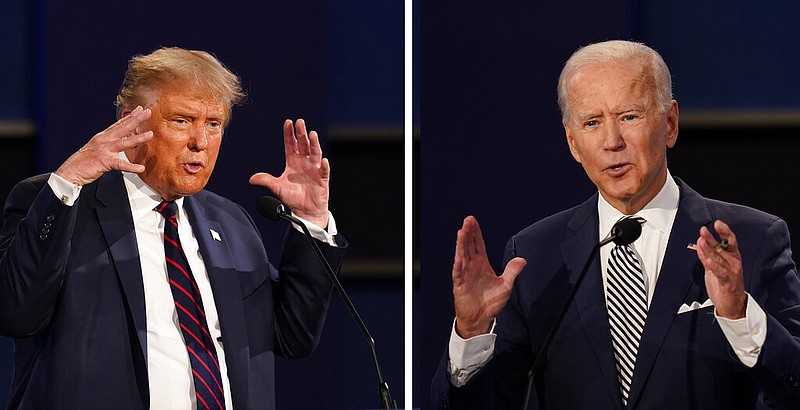 WASHINGTON -- President Donald Trump won Florida, the nation's most-prized battleground state, and held onto Texas as he and former Vice President Joe Biden on Tuesday battled to the finish of an epic campaign with counting in many states expected to continue late into the night and into today.

Many of the battleground states had yet to be called late Tuesday night, including Arizona, Georgia, Michigan, North Carolina, Pennsylvania and Wisconsin.

[Video not showing up above? Click here to watch » https://www.youtube.com/watch?v=DJCC7-aAEfE]

About 1:30 a.m. Central time today, Trump addressed a room full of supporters and his family, and thanked the American people for their "tremendous support."

"I guess this is the latest news conference I've ever had," the president said. He said there is a "sad group of people trying to disenfranchise" his voters, and he vowed not to stand for it. He said he would fight the election results in the Supreme Court if needed.

He believes that his campaign has "clearly" won Georgia, North Carolina and is winning Michigan and Wisconsin. And, "we are winning Pennsylvania by a tremendous amount of votes."

He said Arizona was called too soon and wants that state to stay in play.

Biden asked his supporters to "keep the faith" and urged them to "be patient" as the counting continued late Tuesday night.

The Democratic presidential candidate emerged after midnight to speak on the election results that have left the outcome in the balance. He spent the evening watching the returns come in from his home in Wilmington, Del., then drove downtown by motorcade to make his statement outside the Chase Center.

He told a gathering of supporters that his hopes for victory remain high despite the uncertainty and cautioned them that it could take a day or longer to know who won.

He told them: "Your patience is commendable."

Hours after the polls closed across America, the result was up in the air.

A number of key states still had hundreds of thousands of ballots outstanding as a large influx of mail ballots slowed down the count in states across the nation.

Americans made their choices as the nation faced a confluence of historic crises, with each candidate declaring the other fundamentally unfit to navigate the challenges. Daily life has been upended by the coronavirus, which has killed more than 232,000 Americans and cost millions of jobs.

Millions of voters braved their worries about the virus -- and some long lines -- to turn out in person, joining 102 million fellow Americans who voted days or weeks earlier, a record number that represented 73% of the total vote in the 2016 presidential election.

Early results in several key battleground states were in flux as election officials processed a historically large number of mail-in votes. Democrats typically outperform Republicans in mail voting, while the GOP looks to make up ground in Election Day turnout. That means the early margins between the candidates could be influenced by which type of votes -- early or Election Day -- were being reported by the states.

Pennsylvania's governor pleaded for patience Tuesday night as his state began counting votes in a contest with the potential to decide it all this year, but that could take days to resolve.

"I encourage all of you to take a deep breath," said Democratic Gov. Tom Wolf at a Tuesday night news conference. "What's most important is that we have accurate results, and that each vote is counted."

But even as he spoke, Republicans were filing suit to block the counting of votes, at least temporarily, by people who were allowed to correct mistakes on their mail-in ballots.

In Pennsylvania, state law prohibits any counting of absentee ballots until Election Day morning. Several counties had already said they would not begin the process until this morning.

As of late Tuesday night, about 15% of ballots had been counted statewide. But it was far too early to draw conclusions about a state that both Trump and Biden have considered crucial to their prospects of victory.

For an array of reasons, Pennsylvania was the center of the nation's political universe Tuesday. The state's competitiveness, its election rules and its procedures for counting ballots make it especially contentious.

Michigan will probably not have final results until this evening, said Secretary of State Jocelyn Benson in a news conference at Ford Field in Detroit. That city had a 55% turnout, which equates to more than 250,000 votes.

That will stall final results. The number of votes cast is a record for Detroit, Benson said.

About 62% of the state's voters cast ballots before Election Day. Those could be counted and reported as soon as the polls closed. More registered Democrats voted early than Republicans, but one-third of the electorate is unaffiliated with either major party.

Same-day voting, which is expected to skew Republican, is likely to be counted later.

The election board was expecting about 1 million votes to be cast Tuesday in addition to the early ballots. That would leave 300,000 yet to be counted.

And in Wisconsin, some larger jurisdictions are expected to be counting ballots into this morning, said Meagan Wolfe, the state's Elections Commission administrator.

Control of the Senate was at stake, too: Democrats needed to net three seats if Biden captured the White House to gain control of all of Washington for the first time in a decade. Senate Majority Leader Mitch McConnell of Kentucky won reelection in an early victory for the Republicans, and GOP Sen. Lindsey Graham of South Carolina fought off a fierce challenge to hang onto his seat.

As the results began to come in, the nation braced for what was to come -- and an outcome that might not be known for days.

Outside, a new anti-scaling fence was erected around the White House, and in downtowns from New York to Denver to Minneapolis, workers boarded up businesses in fear the vote might lead to unrest.

Biden spent the day last-minute campaigning in Scranton, Pa., where he was born, and in Philadelphia, with a couple of local stops in Wilmington, Del.

The president began his day on an upbeat note, predicting that he'd do even better than in 2016. But during a midday visit to his campaign headquarters, he spoke in a gravelly, subdued tone.

"Winning is easy," Trump told reporters. "Losing is never easy, not for me it's not."

Trump left open the possibility of addressing the nation Tuesday night, even if a winner hadn't been determined.

"I'm superstitious about predicting what an outcome's gonna be until it happens ... but I'm hopeful," said Biden. "It's just so uncertain ... you can't think of an election in the recent past where so many states were up for grabs."

The momentum from early voting carried into Election Day, as an energized electorate produced long lines at polling sites throughout the country. Turnout was higher than in 2016 in numerous counties, including all of Florida, nearly every county in North Carolina and more than 100 counties in both Georgia and Texas. That tally seemed sure to increase as more counties reported their turnout figures.

Voters braved worries of the coronavirus, threats of polling place intimidation and expectations of long lines caused by changes to voting systems, but appeared undeterred as turnout appeared as if it would easily surpass the 139 million ballots cast four years ago.

No major problems arose Tuesday, outside the typical glitches of a presidential election: Some polling places opened late, robocalls provided false information to voters in Iowa and Michigan, and machines or software malfunctioned in some counties in the battleground states of Ohio, Pennsylvania, Georgia and Texas.

The cybersecurity agency at the Department of Homeland Security said there were no outward signs by midday of any malicious activity. 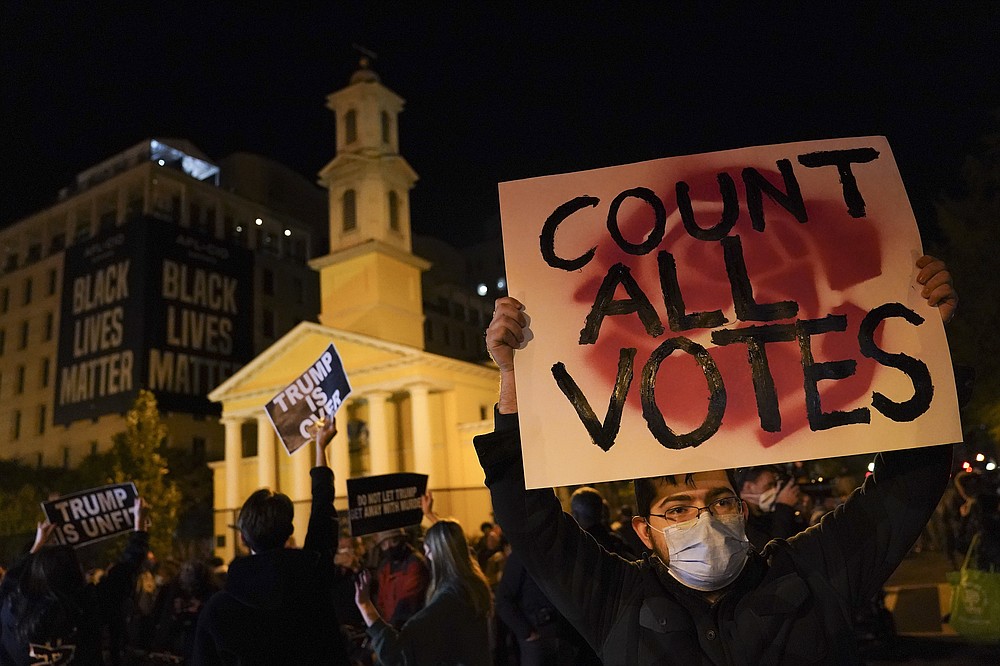 A demonstrator holds up a sign while waiting for election results at Black Lives Matter Plaza, Tuesday, Nov. 3, 2020, in Washington. (AP Photo/John Minchillo) 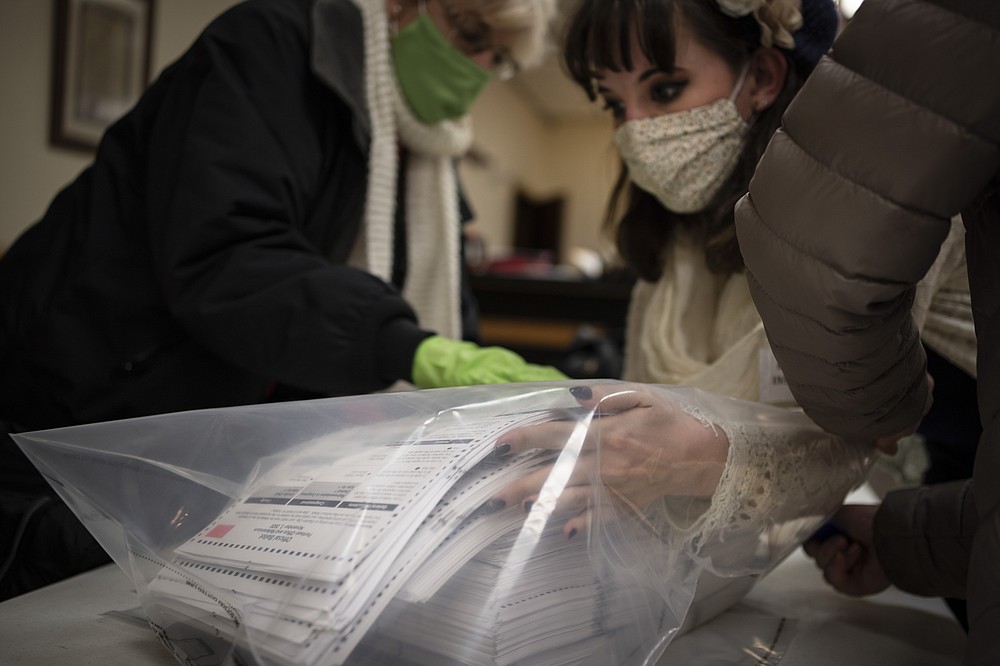 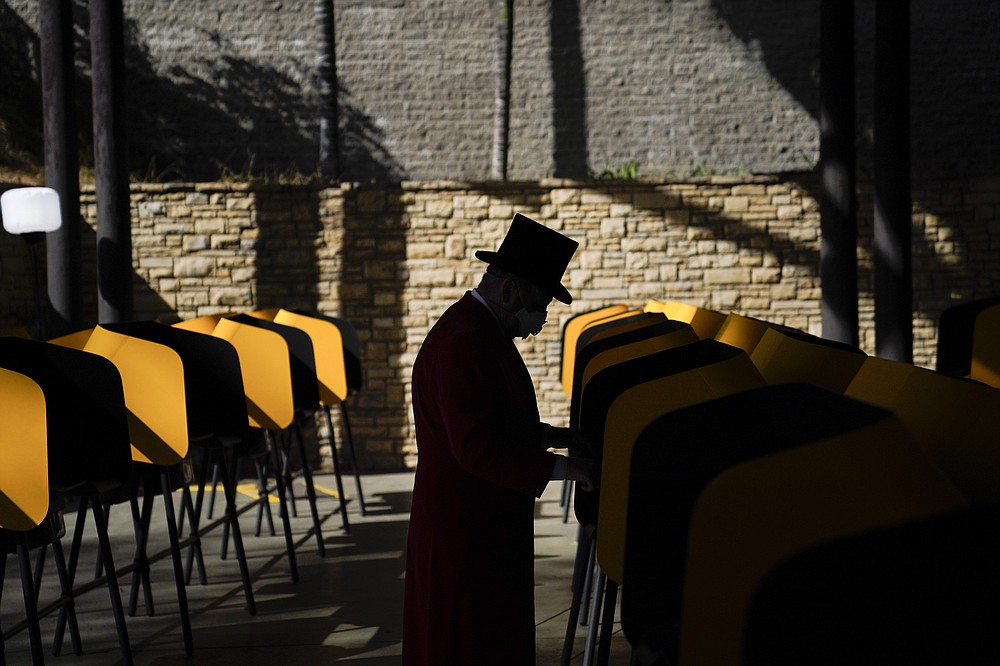 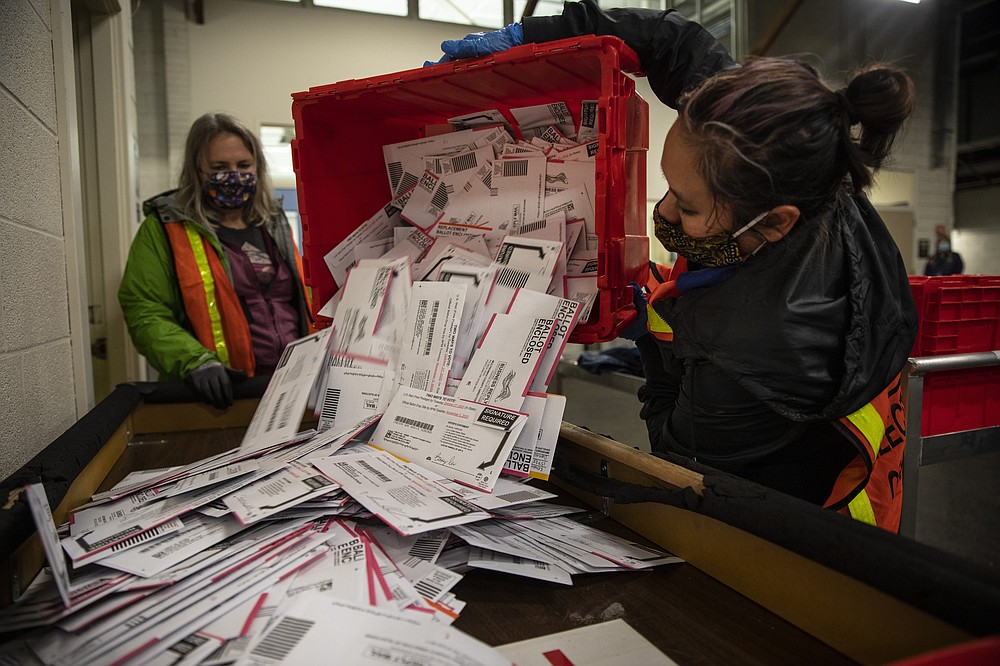 Election worker Kristen Mun from Portland empties ballots from a ballot box at the Multnomah County Elections Division, Tuesday, Nov. 3, 3030 in Portland, Ore. Oregon is the first state in the nation to institute voting by mail and automatic voter registration. (AP Photo/Paula Bronstein) 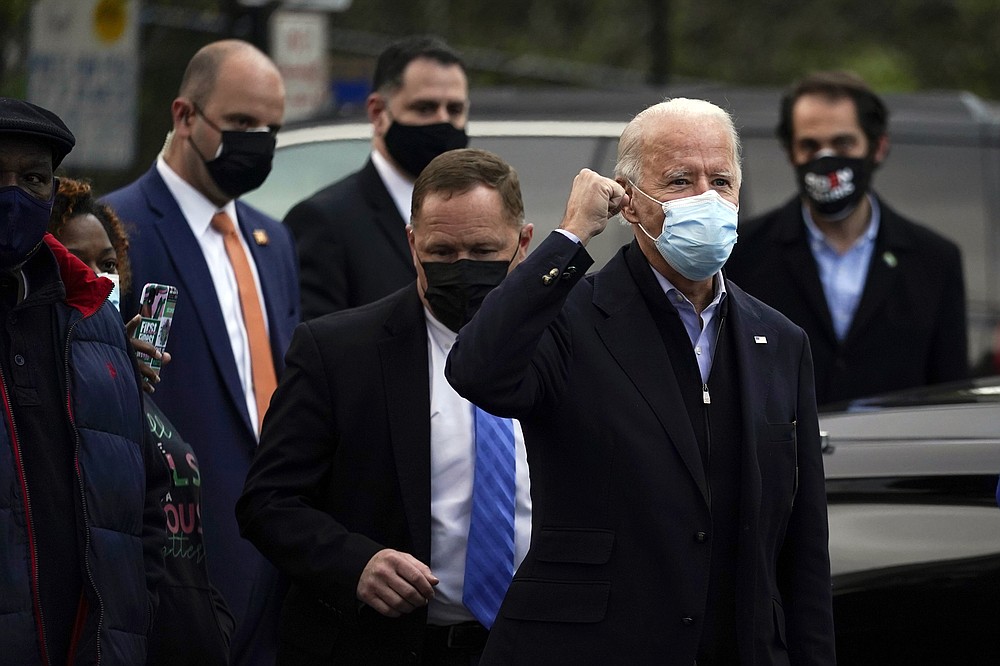 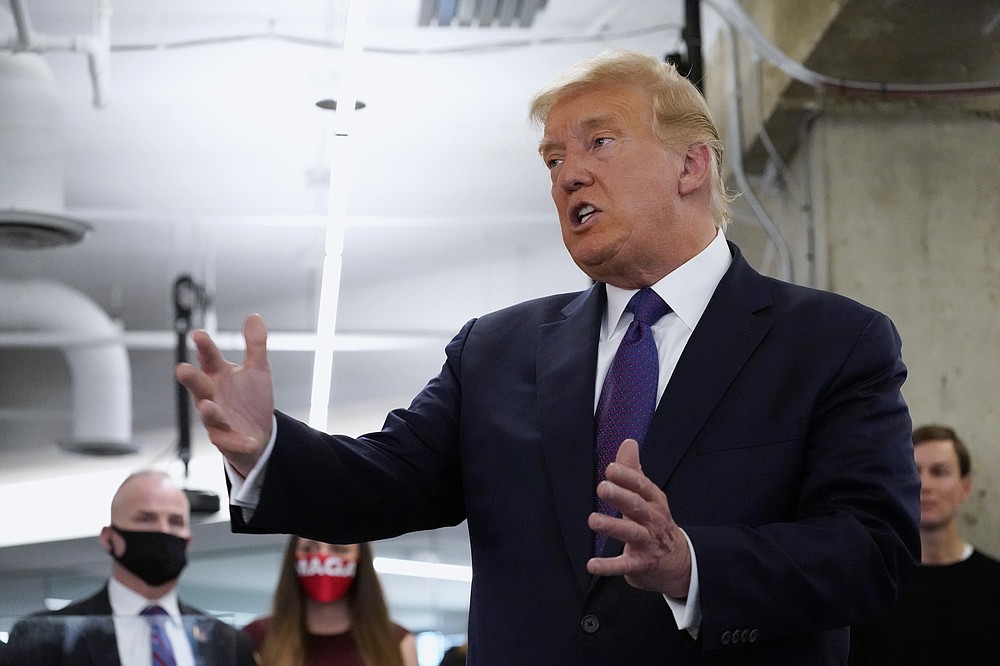 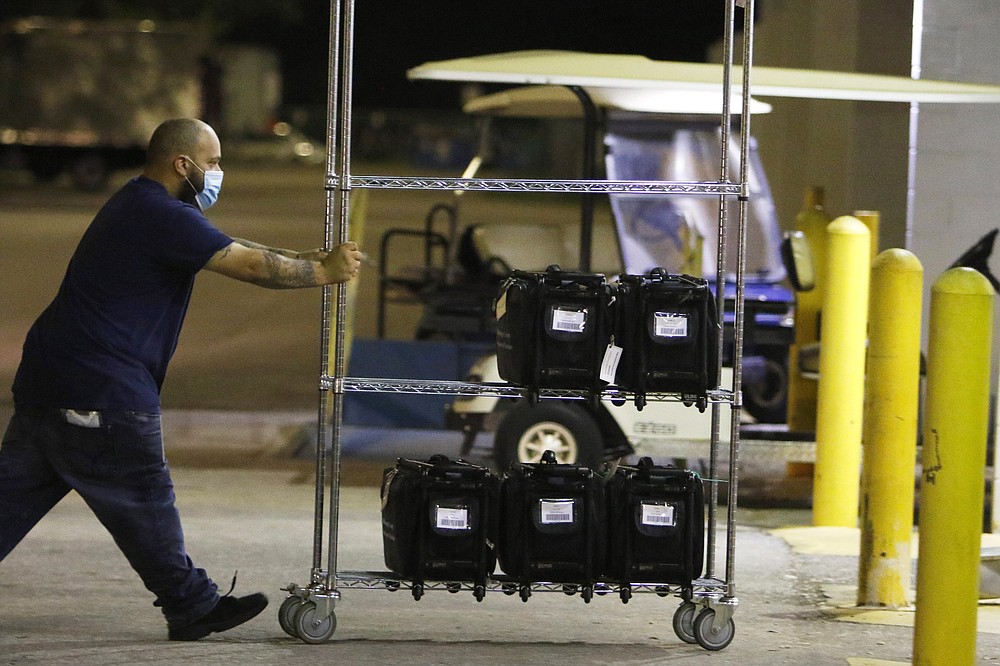 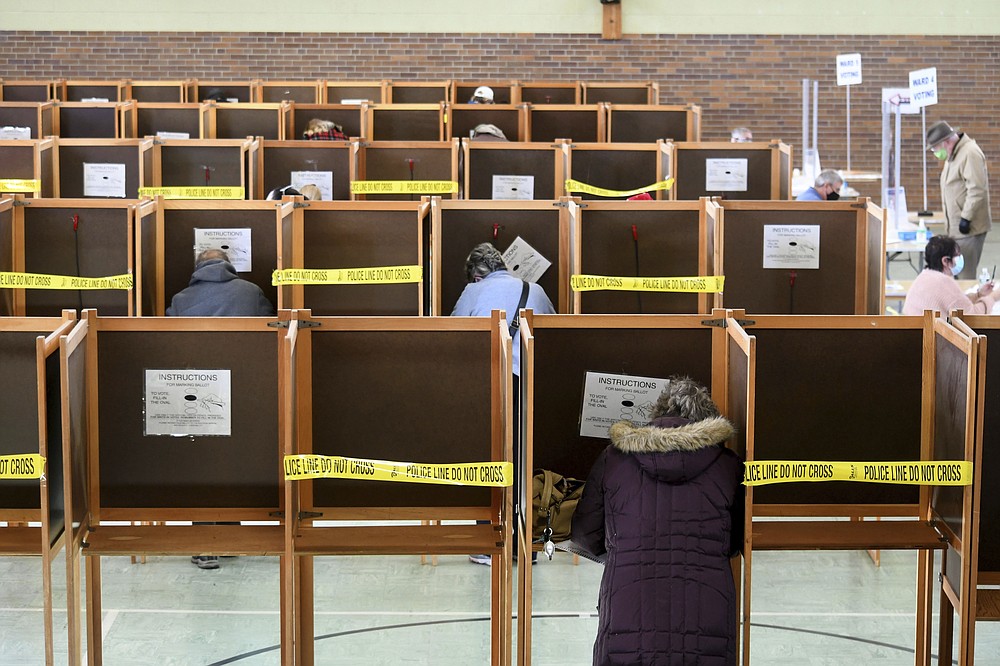 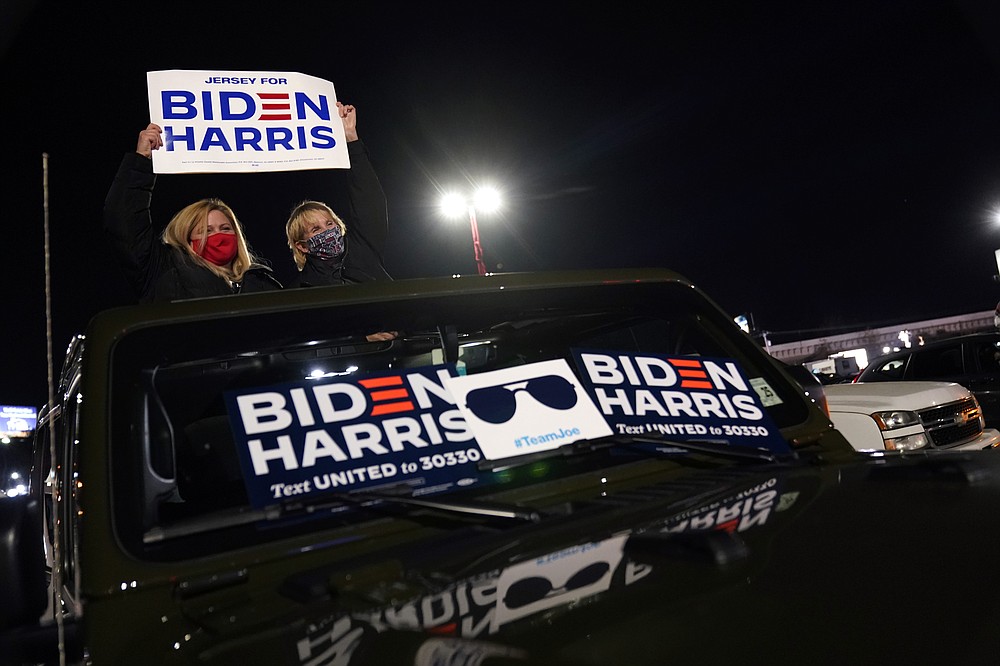