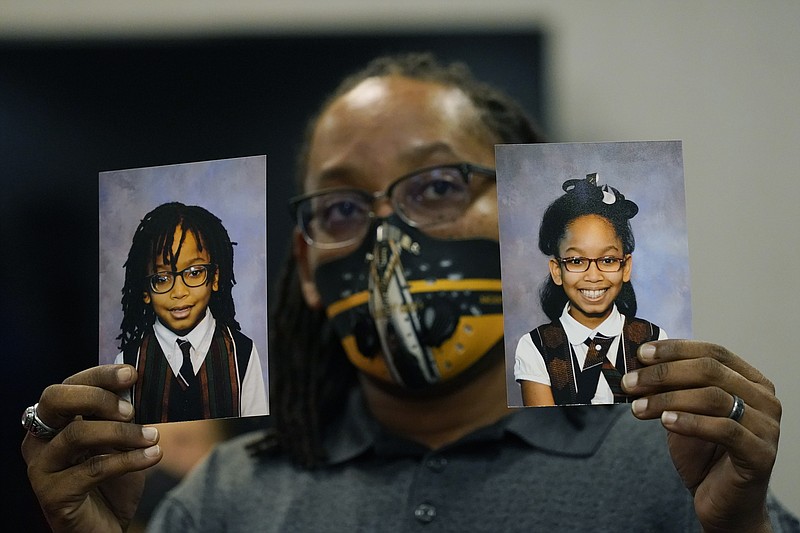 FILE - In this Tuesday, Oct. 27, 2020, file photo, Sheldon Smith, center, holds the photographs of his children Deshawn Smith, 11, left, and Trinitee Smith, 13, both suffering from sickle cell anemia, during an Initiative 65 rally in Ridgeland, Miss. Smith and his wife Keishawna Smith believe their children would benefit from medical marijuana treatment for pain management. Initiative 65 would amend the Mississippi Constitution to allow the prescription by a doctor of up to 5 ounces (142 grams) of marijuana per month for people who suffer from more than 20 medical conditions. The state lawmakers are offering a more restrictive measure as an alternative. (AP Photo/Rogelio V. Solis, File)

The nationwide push to legalize marijuana gained momentum Tuesday with victories in Arizona and New Jersey, while Louisiana voters affirmed an anti-abortion amendment as scores of hot-button ballot measures were decided across the country.

A total of 120 proposed state laws and constitutional amendments were on the ballots in 32 states. They touched on an array of issues that have roiled politics in recent years -- voting rights, racial inequalities, taxes and education, to name a few.

The Louisiana measure asserts there is no state constitutional right to abortion -- a move that could come into play if the U.S. Supreme Court overturns its Roe v. Wade decision that legalized abortion nationwide.

In contrast in Colorado, a measure was trailing in the polls to prohibit abortions after 22 weeks unless the woman's life is endangered. Previous Colorado ballot initiatives to limit abortion also failed in 2008, 2010 and 2014.

Voters in several states were deciding whether to legalize marijuana.

Last December, the Democratic-led New Jersey Legislature placed a measure on the ballot asking state voters whether they should legalize marijuana for people 21 and older. Voter approval Tuesday means the Legislature now will have to pass another measure setting up a marijuana marketplace.

"This victory will undoubtedly have a rippling effect in the Northeast and add to the increasing pressure in neighboring states to take action on marijuana legalization," said Steve Hawkins, executive director of the Marijuana Policy Project, which has backed various state-level marijuana campaigns.

The Arizona measure also legalizes marijuana for those 21 and older and allows people convicted of certain marijuana crimes to seek expungement of their records. Passage signaled a change in attitudes after voters there narrowly defeated a pot proposal in 2016.

A decade ago, recreational marijuana was illegal in all 50 states. Voters allowed it in Colorado and Washington in 2012, sparking a movement that already included 11 states and Washington, D.C., heading into Tuesday's elections.

Voters in Oregon were considering whether to go even further. One proposal there would legalize the therapeutic use of psychedelic mushrooms. Another would make Oregon the first state to decriminalize possession of small amounts of street drugs such as cocaine, heroin and methamphetamine while also funding drug treatment efforts. The state Democratic Party endorsed the measure; the state Republican Party denounced it as radical.

A Virginia constitutional amendment ahead in the polls would take power away from members of the Democratic-led Legislature to draw voting districts for themselves and members of Congress based on census results. It instead would create a bipartisan commission of lawmakers and citizens to develop a redistricting plan that the Legislature could approve or reject, but not change.

Virginia is the sixth state in the past two general election cycles to vote on measures intended to prevent gerrymandering -- a process in which politicians draw voting districts to benefit themselves or their political parties. Voters in Missouri, which passed a redistricting measure in 2018, were deciding Tuesday whether to roll back key parts of it before it can be used next year.

The Missouri measure would repeal a nationally unique model to employ a nonpartisan demographer to draw state House and Senate districts to achieve "partisan fairness" and "competitiveness." Republicans who control the Legislature put forth a new ballot measure this year that would return redistricting duties to a pair of bipartisan commissions and drop "partisan fairness" and "competitiveness" to the end of the criteria.

Tax proposals were on the ballot in more than a dozen states, including higher property taxes on California businesses and higher income taxes on the wealthy in Illinois and Arizona. The additional tax revenue in Arizona would fund pay raises for teachers and other school personnel.

Information for this article was contributed by Dave Skretta of The Associated Press. 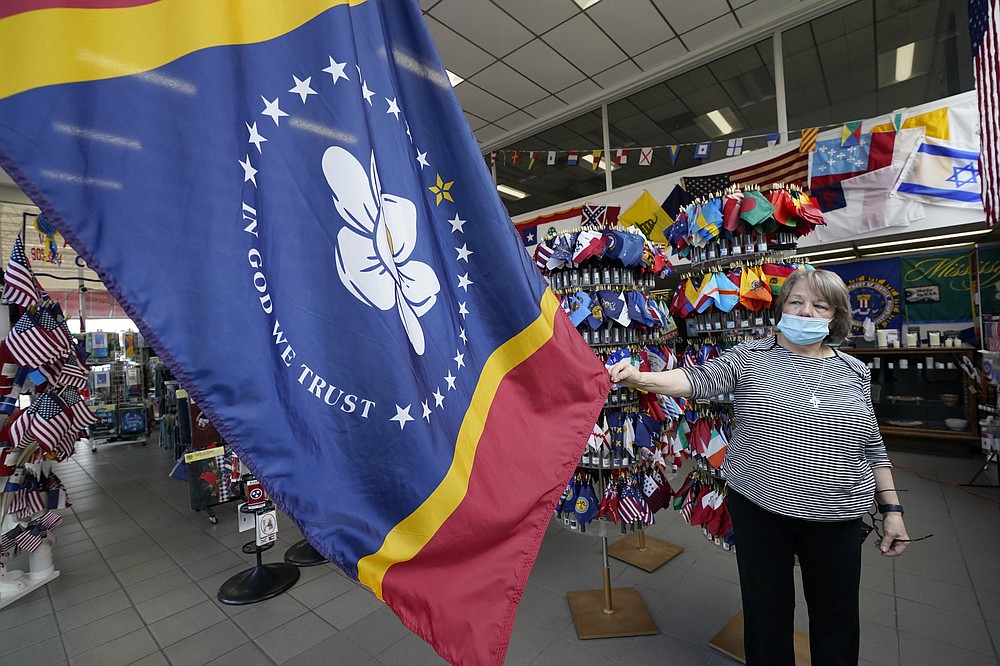 FILE - In this Tuesday, Oct. 27, 2020, file photo, Brenda McIntyre, a co-owner of A Complete Flag Source store in Jackson, Miss., shows off the magnolia-centered banner chosen by the Mississippi State Flag Commission, that voters will vote on as the new Mississippi state flag on Nov. 3, 2020. (AP Photo/Rogelio V. Solis, File) 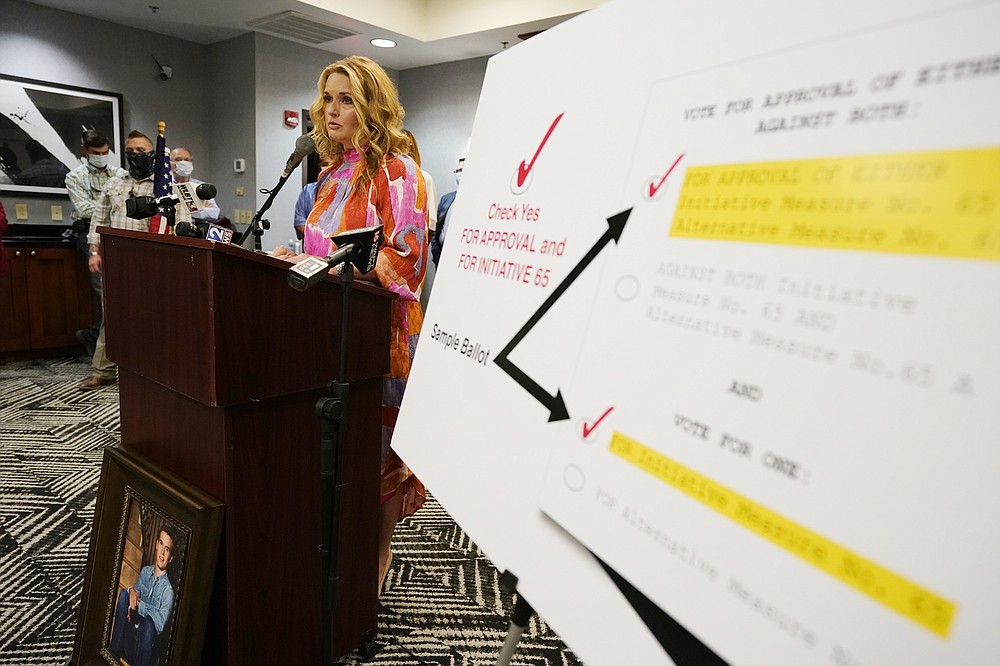 FILE - In this Tuesday, Oct. 27, 2020, file photo, Angie Calhoun of Madison, speaks about her son Austin, in the photo below the lectern, having to move to Colorado when he was 19 for medical marijuana treatment because treatment for his chronic conditions including focal seizures, severe joint pain and nausea then required his taking 17 prescriptions including opioids, during a Initiative 65 rally in Ridgeland, Miss. Initiative 65 would amend the Mississippi Constitution to allow the prescription by a doctor of up to 5 ounces (142 grams) of marijuana per month for people who suffer from more than 20 medical conditions. The state lawmakers are offering a more restrictive measure as an alternative. (AP Photo/Rogelio V. Solis, File) 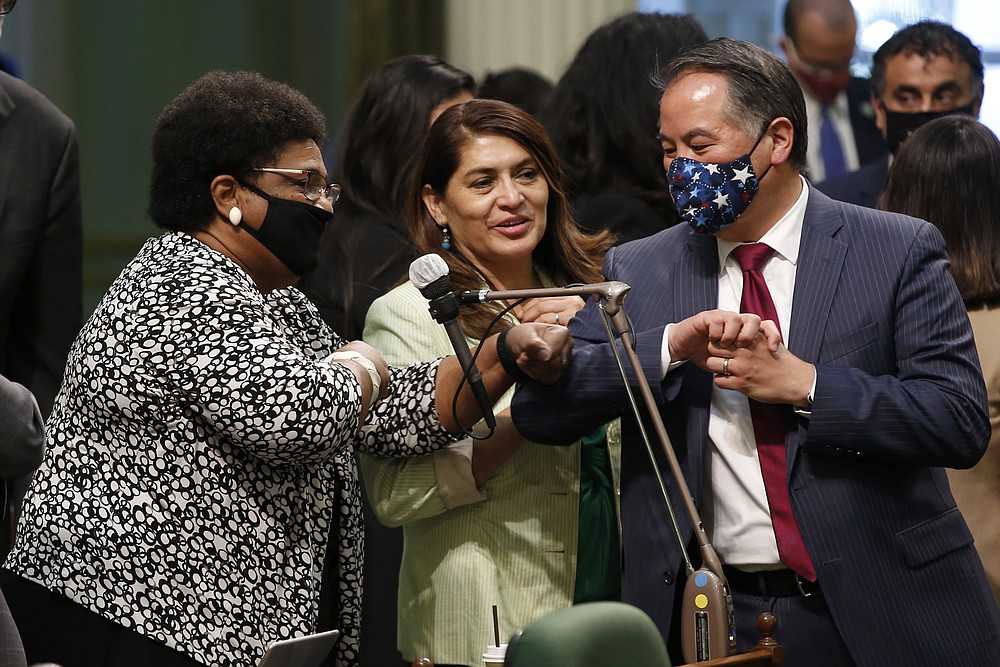