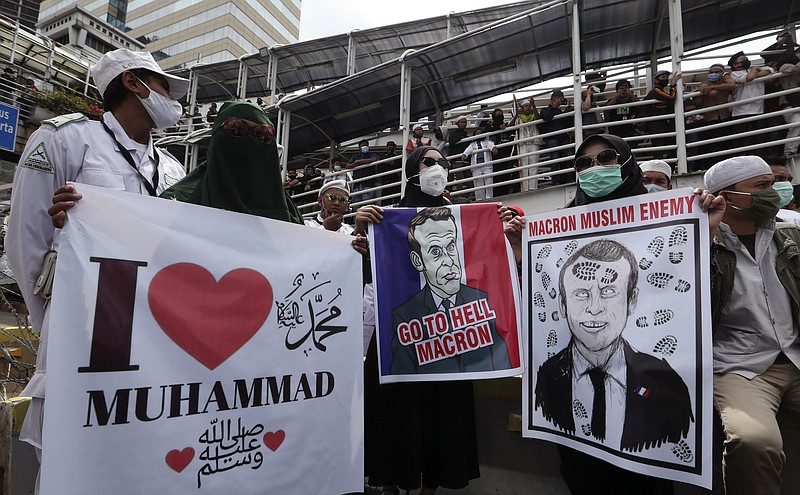 PARIS -- French President Emmanuel Macron spoke to Egyptian and Palestinian leaders after a week of anti-French protests around the Muslim world and three Islamic extremist attacks on France.

Macron is seeking to calm tensions and to straighten out misunderstandings while also defending France's values. The French president's office said Tuesday that Egyptian President Abdel-Fattah el-Sissi and Palestinian President Mahmoud Abbas both offered him support.

Around the Mideast and South Asia, demonstrators have expressed anger in recent days over caricatures of the Prophet Muhammad published in French newspaper Charlie Hebdo and Macron's policies toward freedom of expression and Islamism.

Macron's office said in a statement that el-Sissi expressed his solidarity with France and denounced the attacks as well as the protests.

El-Sissi's office said the Egyptian leader told Macron during a Monday phone call that coexistence between different religions "should be promoted through dialogue, understanding, mutual respect and without prejudice to religious icons." El-Sissi said he and France's leader discussed their countries' "mutual positions" in fighting extremism and its supporters.

Macron also spoke with Abbas, who offered condolences and "his support to France in this ordeal," according to Macron's office.

The Palestinian president's office said Abbas stressed "the need for everyone to respect religions and religious symbols and not allow anything offensive to Prophet Muhammad and all prophets and religions while condemning all those who do so." Abbas also emphasized "his rejection of extremism, violence and terrorism," while Macron expressed his "respect for Islam and the Islamic world," according to the official Palestinian news agency WAFA.

Macron also explained France's positions during a weekend interview with Arabic network Al Jazeera in which he called for mutual understanding and respect.

Signing a condolence book at the Austrian Embassy in Paris on Tuesday after a deadly attack Monday in Vienna, Macron said the killings "speak of the determination of our enemies to attack what Europe is, this land of liberties, of culture, of values. Therefore we will not give in."