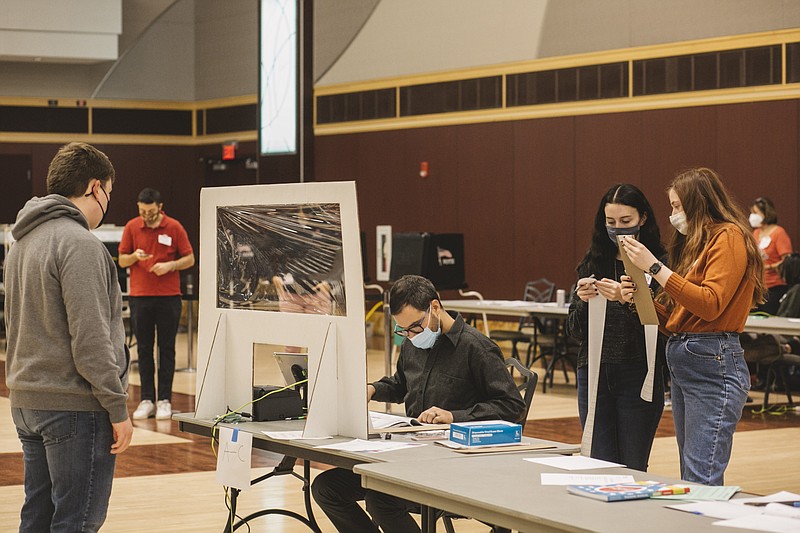 Voters check-in on the campus of Ohio State University in Columbus, Ohio, on Tuesday. MUST CREDIT: Photo for The Washington Post by Andrew Spear

WASHINGTON -- Americans contended with scattered voting equipment failures and sporadic crowds as they lined up for the election season's final day of voting Tuesday.

Nearly 102 million people had already cast ballots either in person or by mail before voting began on Election Day, a figure that underscored how the pandemic transformed this year's election as many voters sought to avoid the risk of infection.

"A lot of people were fearful to come out and vote today, and for me I didn't want fear to stop me from voting on Election Day," said Sadiyyah Porter-Lowdry, 39, who cast her ballot at a church in Charlotte, N.C.

[Video not showing up above? Click here to watch » https://www.youtube.com/watch?v=ZcNy752lmWk]

Voting was largely brisk and steady, with observers marveling at the relative ease with which the day unfolded after a spring and summer of chaotic primaries, U.S. Postal Service delays and legal battles between Republicans and Democrats over how the election should be administered.

Voters breezed through large facilities in some cities and waited by the hundreds in others. Early turnout was light in Atlanta; Dayton, Ohio; Miami; and Louisville, Ky., prompting relief from election officials who have spent months preparing for complications arising from the pandemic. But long lines formed in other places, including New York City, Las Vegas, Green Bay, Wis., and St. Petersburg, Fla. -- a reminder of the surge of interest in this year's race for the White House between President Donald Trump and former Vice President Joe Biden.

Voters encountered a growing number of obstacles as the day progressed, including a snow squall in Manchester, N.H., and problems with machines and voter check-in systems in cities such as Columbus, Ohio, and Philadelphia.

But state officials across the country said voting was generally running smoothly. There were no signs of large-scale voter intimidation or clashes at the polls as some had feared.

"I would say that it is blissfully uneventful. We have a lot of enthusiasm and a lot of engagement and high turnout," Michigan Attorney Gen. Dana Nessel, a Democrat, said on a late-afternoon call hosted by the Voter Protection Project. She added that there had been "virtually no disturbance of any kind."

In Nevada, Democratic Attorney General Aaron Ford said there were a few scattered "hiccups" with electronic voting machines that were quickly resolved.

"Folks are showing up. They are exercising their rights, they're performing their duty. Here in Nevada, all is well," Ford said on the call.

Among the day's developments:

• Voters received an estimated 10 million automated spam calls in recent days telling them to "stay safe and stay home," according to experts who track the telecom industry.

• Poll workers at a north Philadelphia polling location raised concerns about the security of two voting machines after discovering broken seals meant to lock the area of the machines where paper ballots are stored. A city election judge blamed an "honest mistake" rather than foul play.

• A burst water pipe in State Farm Arena in Atlanta delayed the counting of several thousand absentee ballots that were housed there Tuesday morning, but no ballots or machines were damaged, county election officials said.

• The absence of other critical problems was notable in Georgia, where a June primary was dogged by long lines and voter confusion. Officials attributed the change in part to people voting early.

• At one voting location in Detroit, police removed a registered challenger sporting a Halloween mask covering his entire face and another who refused to wear a mask over her nose.

• In a scene repeated near several polling locations across the country, a caravan of Trump supporters waving pro-Trump flags and banners drove through downtown Anoka, Minn., honking their horns and chanting, "Trump! Trump!"

First-time voters were among those at the front of the lines Tuesday.

Brian Dalley, 60, arrived at Ada Bible Church in Ada, Mich., before the sun rose and even before many of the election workers arrived. He was the first in a line of about 70 voters that stretched along the edge of the parking lot under a waning moon, their faces illuminated by phones and their hands cradling hot coffee.

In some states, Tuesday also marked the start of processing and counting the mountain of absentee ballots that election offices must contend with.

Those who did vote on Election Day included some who wanted to vote by mail but waited too long to request a ballot or didn't receive their ballots in time.

Kaal Ferguson, 26, planned to vote by mail but was concerned he hadn't left enough time to send his ballot back. So he voted in person in Atlanta, despite worries he could be exposed to covid-19 by fellow voters.

"Obviously everybody has their right to vote," he said. "But it's kind of scary knowing that there's not a place just for them to vote if they'd had it, so you could easily be exposed."

The Postal Service turned down a federal judge's order late Tuesday afternoon to sweep mail processing facilities serving 15 states, saying it would stick to its own inspection schedule. The judge's order came after the agency disclosed that more than 300,000 ballots nationwide could not be traced.

U.S. District Judge Emmet Sullivan of the District of Columbia had given the agency until 3:30 p.m. to conduct the "all clear" checks to ensure there would be enough time to get any found ballots to election officials before polls closed. His order affected 12 postal districts spanning 15 states.

But in a filing sent to the court just before 5 p.m., Justice Department attorneys representing the Postal Service said the agency would not abide by the order to better accommodate inspectors' schedules.

"This daily review process, however, occurs at different times every day," Justice Department attorney John Robinson wrote. "Specifically, on Election Night, it is scheduled to occur from 4 p.m. to 8 p.m., a time period developed by Postal Service Management and the Postal Inspection Service in order to ensure that Inspectors are on site to ensure compliance at the critical period before the polls close. Given the time constraints set by this Court's order, and the fact that Postal Inspectors operate on a nationwide basis, Defendants were unable to accelerate the daily review process to run from 12:30 p.m. to 3:00pm without significantly disrupting preexisting activities on the day of the Election, something which Defendants did not understand the Court to invite or require." 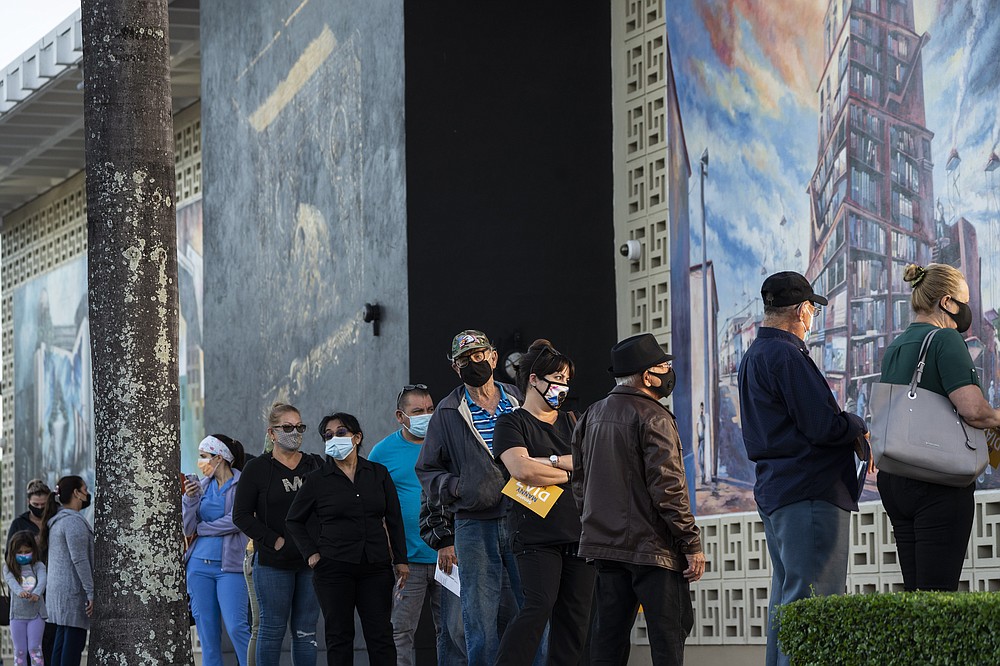 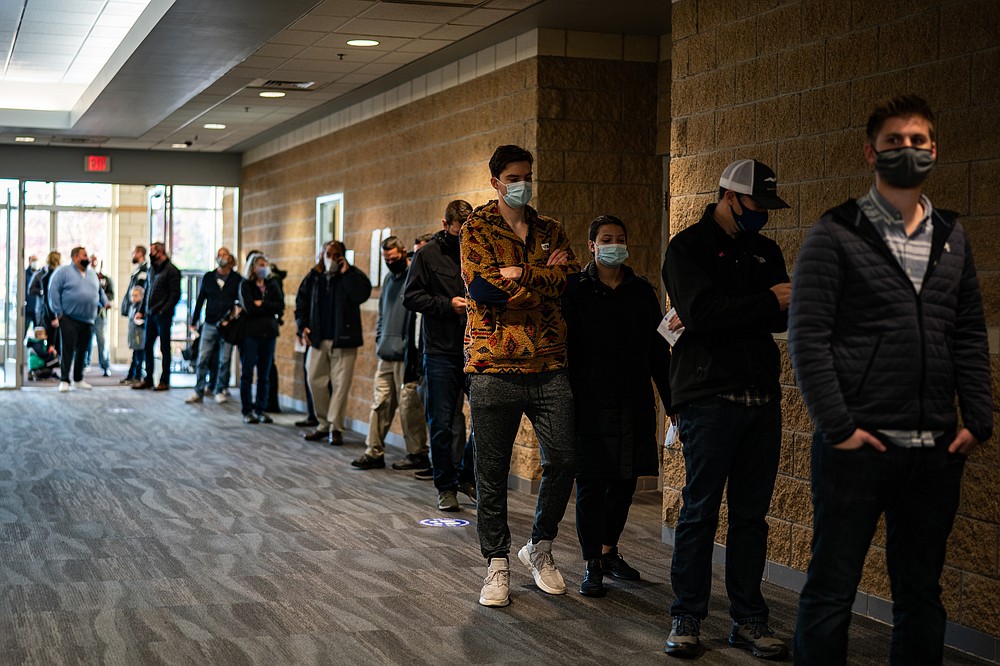 Voters wait in line at a polling location inside Ada Bible Church in Ada, Mich., on Tuesday. MUST CREDIT: Washington Post photo by Salwan Georges 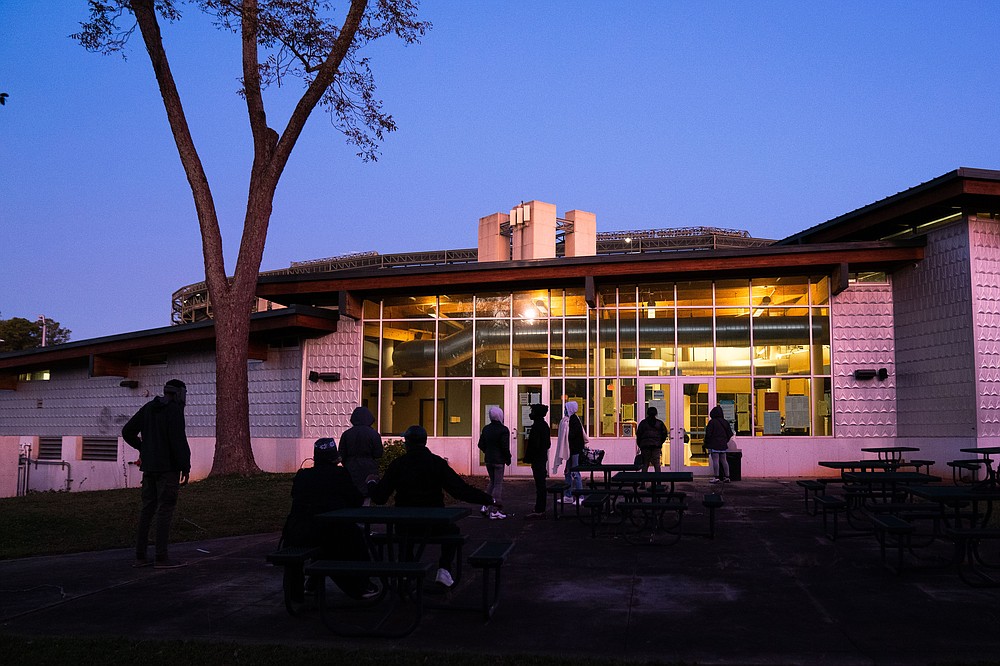 Voters wait in line before the doors open at the precinct at FanPlex, an event space in Atlanta, on Tuesday, Nov. 3, 2020. MUST CREDIT: Photo for The Washington Post by Kevin D. Liles
ADVERTISEMENT