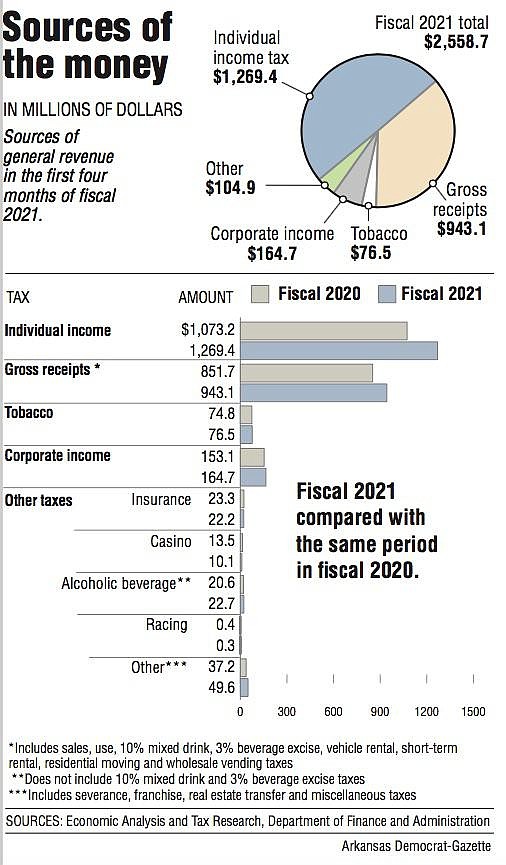 Bolstered by surging sales-and-use tax collections, state government's general revenue collections in October increased by $11.1 million over a year ago to $565.5 million and exceeded the state's April 2 forecast by $66.9 million.

Sales tax and use tax collections increased last month by 12% compared with a year ago, while the state's individual income taxes slipped by 3.7% from a year ago, the Arkansas Department of Finance and Administration said Tuesday in its monthly revenue report.

Both the state's sales-and-use tax and individual income tax collections in October exceeded the state's forecast by double digits. They are state government's two largest sources of general revenue that help finance the state's public schools, the state's Medicaid program, colleges and universities, prisons and other state-supported programs.

October's collections set a record for the month, exceeding the previous high of $554.4 million in October 2019, said Whitney McLaughlin, a tax analyst for the Finance Department.

Tax refunds and some special government expenditures are taken off the top of general revenue, leaving a net amount that state agencies are allowed to spend.

"The fact that after 4 months of this year we have a surplus of over $230 million is a tribute to our conservative budgeting," the Republican governor said in a written statement.

"The surplus also reflects the improved efficiencies and management as a result of last year's transformation of state government. While the state is in good financial position, we are always reminded of the unpredictability of the economy in the coming months," Hutchinson said.

October was the fourth month of fiscal 2021, which started July 1.

In the fiscal session in April, the Arkansas Legislature enacted a $5.89 billion general revenue budget for fiscal 2021.

Asked whether the finance department's April 2 general revenue forecast was too low based on the state's accumulated surplus of $231.8 million in the first four months of the fiscal year, finance department Secretary Larry Walther said that "we'll continue to monitor that as we go forward."

"There are a lot of unknowns as we get into next calendar year because we are looking at the real impact of the pandemic [and] the virus, and its impact on the economy will be reflected when they start filing returns [due on April 15] and we'll see a lot about what happened ... and maybe some truing up of what we have seen this year," Walther said.

The state's chief economic forecaster, John Shelnutt, said, "I think we are kind of turning a corner in October where we are ending up tax year 2019 payments and realizing it was a pretty good pre-covid time period."

Next Tuesday, Hutchinson is scheduled to present to lawmakers his proposed general revenue budget for fiscal 2022, which starts July 1, 2021.

Last month, the governor said his goal has always been to reduce the state individual income tax rate, but that "our next step in income tax reduction will depend on the economic outlook in the next few months."

"We are still down in restaurants, recreation, accommodation, travel services. It still looks bad in those sectors," he said.

Withholdings are the largest category of individual income tax collections.

Collections from returns and extensions increased by $2.2 million from a year ago to $43.2 million, and they exceeded the state's forecast by $13.7 million.

Collections from estimated payments dropped by $3.2 million from a year ago to $10.4 million and exceeded the state's forecast by $2.1 million.

• A $5.3 million, or 14.7%, decrease in corporate income tax collections from a year ago to $30.6 million, which exceeded the state's forecast by $7.5 million, or 32.3%, largely because of collections on estimated payments.