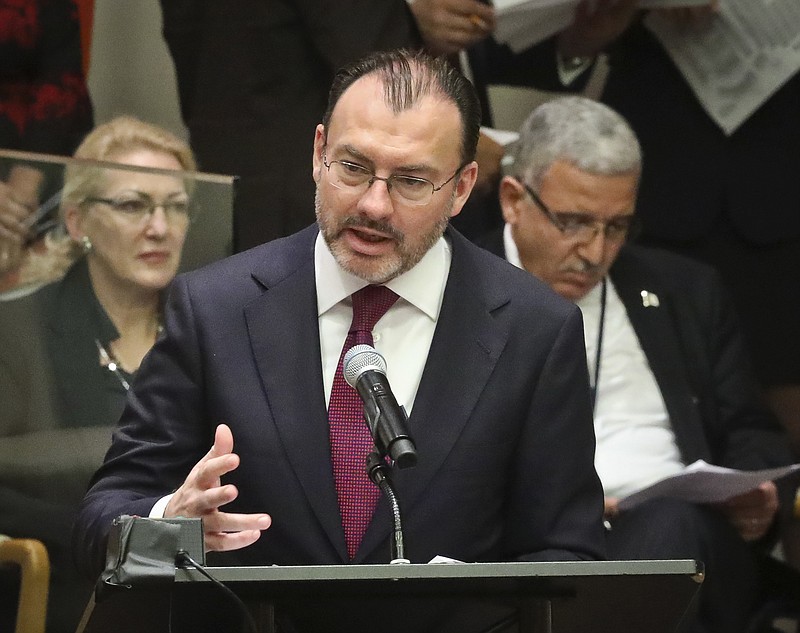 MEXICO CITY -- Mexico's president confirmed Tuesday that federal prosecutors had tried to get an arrest warrant for former Treasury and Foreign Relations Secretary Luis Videgaray, but said a judge rejected the request.

Videgaray, currently a faculty member at the Massachusetts Institute of Technology's Sloan School of Management, is considered the political figure closest to former President Enrique Pena Nieto, in whose 2012-18 administration he served.

Videgaray has denied accusations by the former head of the state-owned oil company that he engaged in bribery or illegal campaign financing. In a statement in August, Videgaray wrote that the accusations "are false. Moreover, they are absurd, inconsistent and reckless."

President Andres Manuel Lopez Obrador said Tuesday he did not know what the charges were because he maintains an arms-length relationship with the independent attorney general's office, though he said he had read they included a charge of treason. Lopez Obrador said he didn't know whether the judge had permanently rejected the warrant, or returned to it to prosecutors asking for more evidence or corrections.

The charges appear related to a formal legal complaint filed by Emilio Lozoya, the former head of Mexico's state-run oil company Petroleos Mexicanos. Lozoya alleged that Pena Nieto and Videgaray -- then his treasury secretary -- directed him to bribe lawmakers, including five senators, to support controversial energy and other structural reforms.

After months on the run, Lozoya was arrested in Spain in February and extradited to Mexico in July after agreeing to cooperate with investigators. He faces corruption charges related to Pemex's overvalued purchase of a fertilizer plant and to millions in dollars of bribes from Brazilian construction firm Odebrecht.

In addition to the alleged bribes for lawmakers, Lozoya told prosecutors that Pena Nieto and Videgaray told him to use $4 million from Odebrecht to pay foreign campaign consultants for work on Pena Nieto's 2012 election campaign. That campaign put his Institutional Revolutionary Party back in power after 12 years in the opposition.

Pena Nieto, who is reported to live abroad, has not spoken publicly since the allegations surfaced.