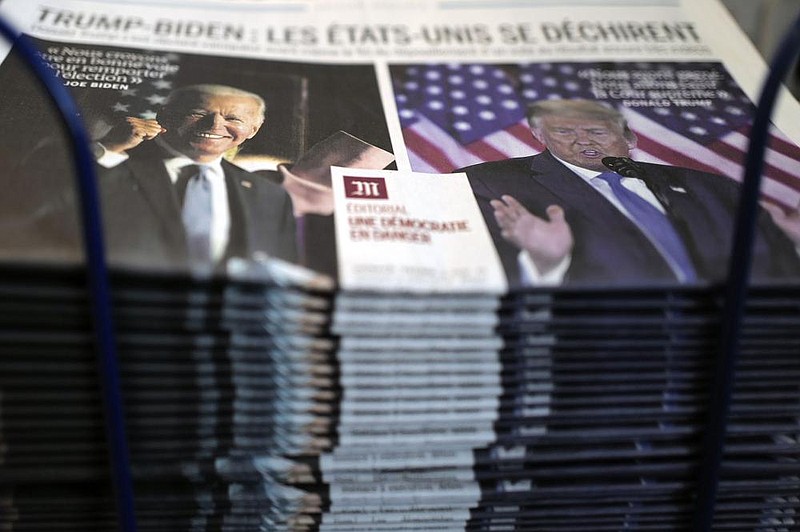 A stack of Le Monde newspapers sits at a newsstand Wednesday in Paris. The headline proclaims in French: “Trump-Biden: the United States is tearing itself apart.” (AP/Francois Mori)

Without an immediate result, the guessing game of whether -- and how -- President Donald Trump or former Vice President Joe Biden would end up in the White House quickly turned global.

Government leaders scrambled to digest the delay and ordinary people swapped views, hopes and fears on feeds and phones. Some scratched their heads -- not for the first time -- over the fact that a U.S. president in a republic system of government need not win the most votes overall but rather must capture 270 votes in the Electoral College.

Underscoring how the drama captured global audiences, television graphics in Japan used fireballs to denote some of the battleground states crucial to the outcome.

"I'm hearing it may take some time before things are sorted out," said the Japanese finance minister, Taro Aso. "I have no idea how it may affect us."

In Paris, a Spanish resident, Javier Saenz, was stunned to wake up without a declared winner.

"I thought there was going to be something clear. And I have read different articles; no one really knows who is going to win," he said. "I am very shocked by that."

The lack of an immediate winner was not, in itself, an indication that anything was wrong. In a year turned upside down by the coronavirus pandemic, many states made it easier to vote by mail. That slowed the compiling of results.

Russian opposition leader Alexei Navalny, who has been poisoned and attacked for challenging the Kremlin and trying to make Russia more democratic, even suggested that the delay was comforting, a sign of democracy at work.

"Woke up and went on Twitter to see who won. Still unclear. Now that's [what I call] elections," he tweeted.

But elsewhere, global unease of not knowing was mixing with sharpening concerns about how America might heal after the divisive campaign. Trump's claims of victory and his threat to take the election to the Supreme Court also sparked anxiety.

From Europe, in particular, came appeals for patience and rigorous vote-counting. In Slovenia, the birthplace of first lady Melania Trump, the prime minister, Janez Jansa, claimed it was "pretty clear that American people have elected Donald Trump."

The German vice chancellor, Olaf Scholz, insisted on a complete tally, saying, "It is important for us that everything be counted, and in the end we have a clear result."

And the German defense minister, Annegret Kramp-Karrenbauer, said that "the battle over the legitimacy of the result -- whatever it will look like -- has now begun."

"This is a very explosive situation. It is a situation of which experts rightly say it could lead to a constitutional crisis in the U.S.," she said on ZDF television. "That is something that must certainly worry us very much."

In financial markets, investors who'd been hoping for a clearer outcome struggled to make sense of it all, sending indexes bobbing up and down. Industry lobbying groups in Germany and Japan, both U.S. trading partners, warned that sustained uncertainty could be bad for business.

Traditional U.S. allies clung to the belief that regardless of whether Trump or Biden emerged victorious, the fundamentals that have long underpinned some of America's key relationships would prevail.

"Whatever the result of the election, they will remain our allies for many years and decades, that is certain," said Thierry Breton, the European Union's commissioner for its internal market.

There were also some in Russia, Africa and elsewhere claiming that the electoral process was exposing the imperfections of American democracy.

"Africa used to learn American democracy; America is now learning African democracy," tweeted Nigerian Sen. Shehu Sani, reflecting a view from some on a continent long used to troubled elections and U.S. criticism of them.

In Zimbabwe, the ruling ZANU-PF party's spokesman, Patrick Chinamasa, said, "We have nothing to learn about democracy from former slave owners."

But others said U.S. voters distinguished themselves by casting their ballots in great numbers in the midst of the pandemic.

"That would be a remarkable story for democracy, no matter what the result is," said Leslie Vinjamuri, an international relations expert at the Chatham House think tank in London.

"But if what we see in the next few days is a contested election, a president alleging fraud, people on the ground descending into some sort of fighting over the results, trying to block counting, then I think we're in a wholly different situation." 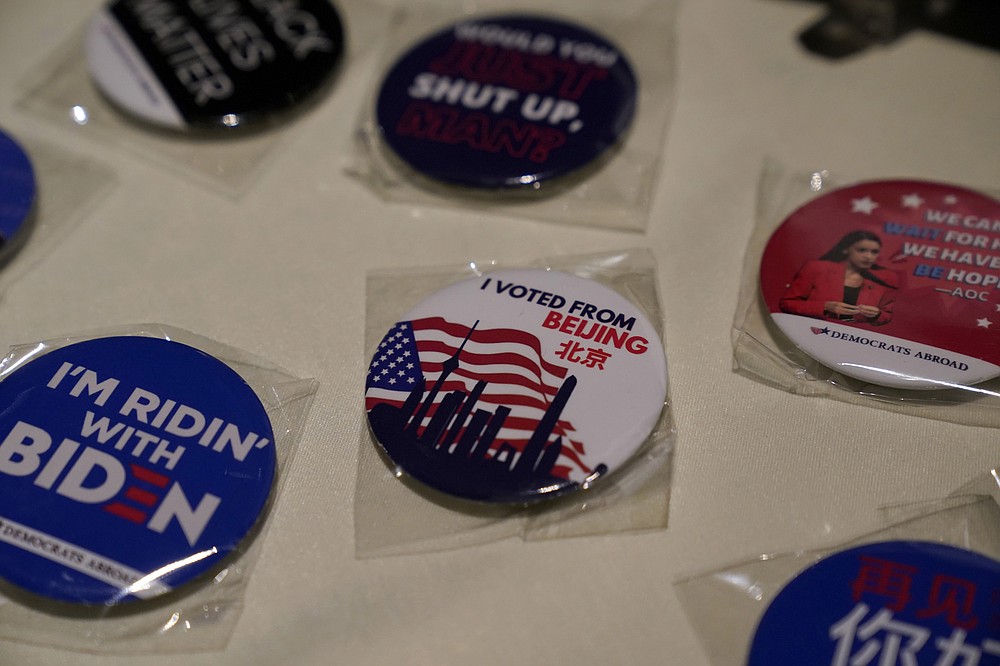 Badges are displayed at an election watch event held by Democrats Abroad at a restaurant in Beijing, China on Wednesday, Nov. 4, 2020. President Donald Trump and his Democratic challenger, Joe Biden, are in a tight battle for the White House. (AP Photo/Ng Han Guan) 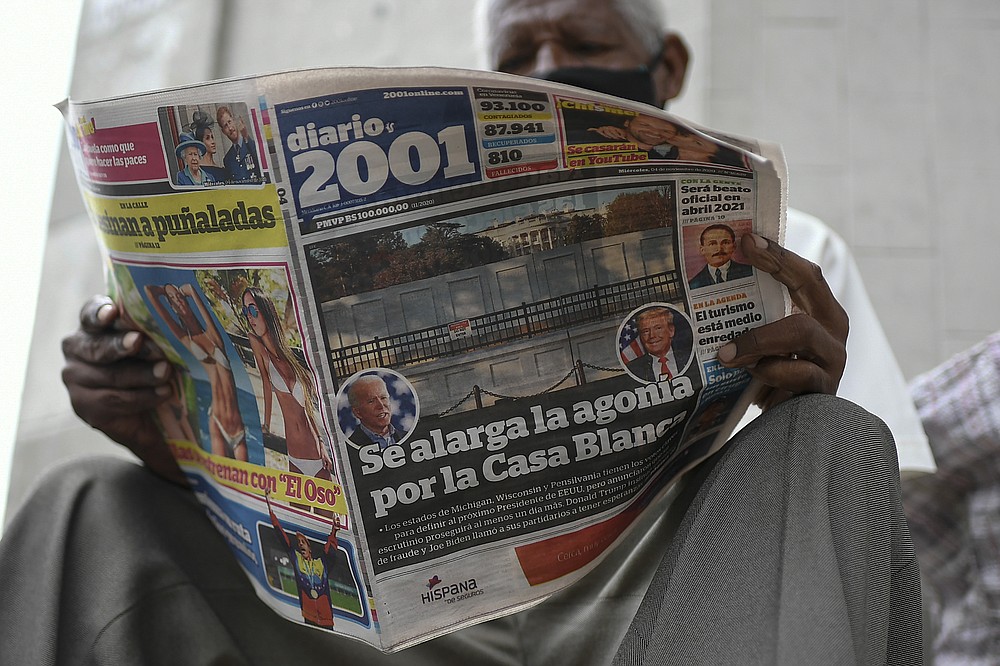 A man reads the Diario 2001 newspaper that carries the Spanish headline: "Agony is prolonged for the White House" at a newspaper stand in Caracas, Venezuela, Wednesday, Nov. 4, 2020, the day after U.S. elections. (AP Photo/Matias Delacroix) 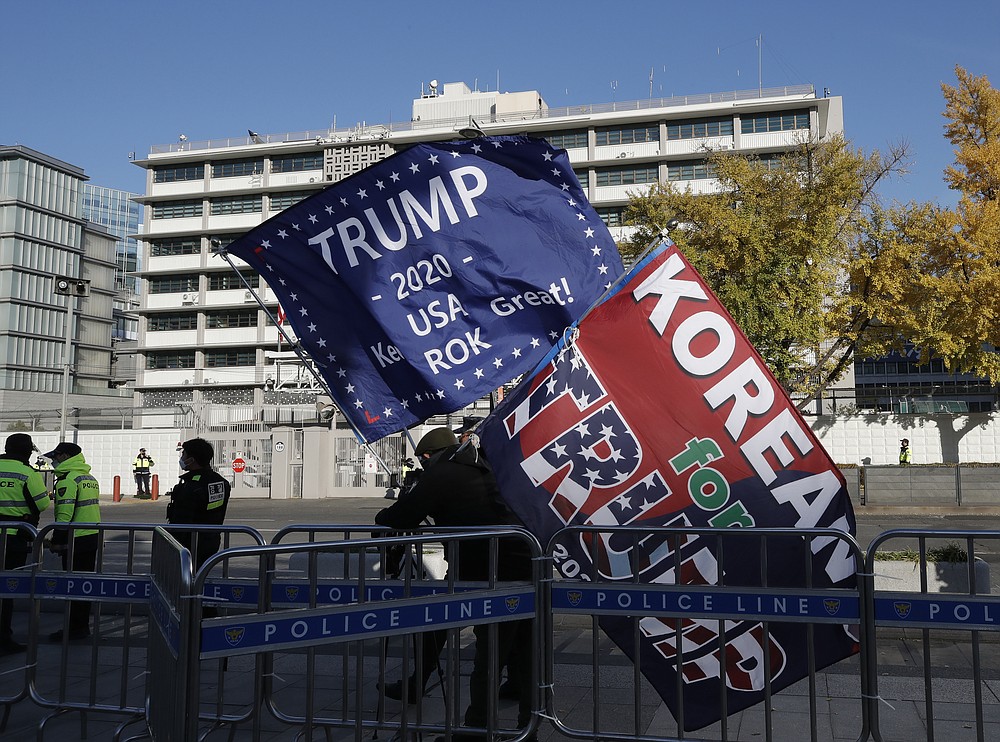 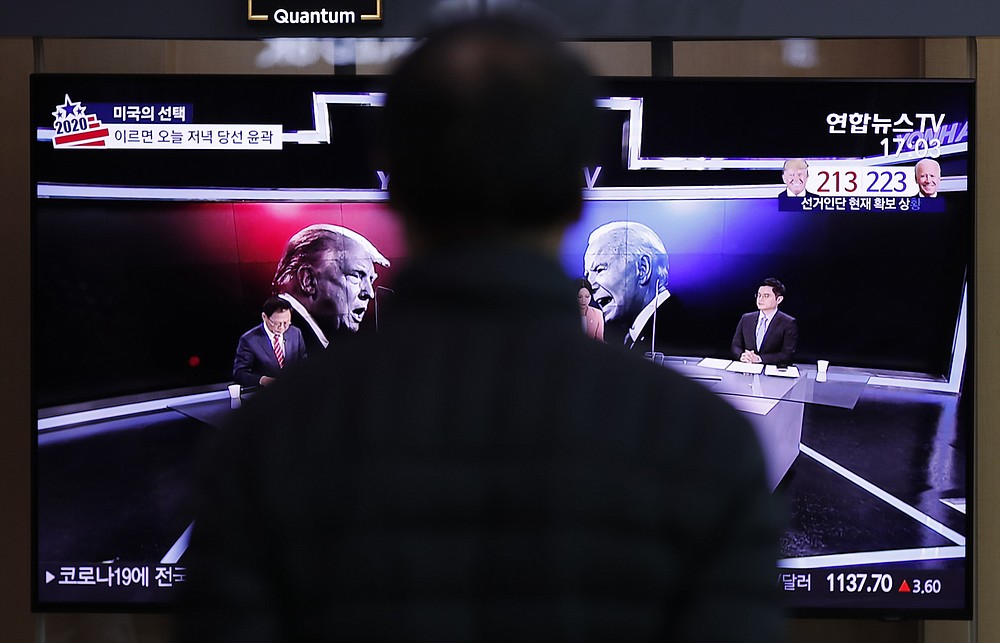 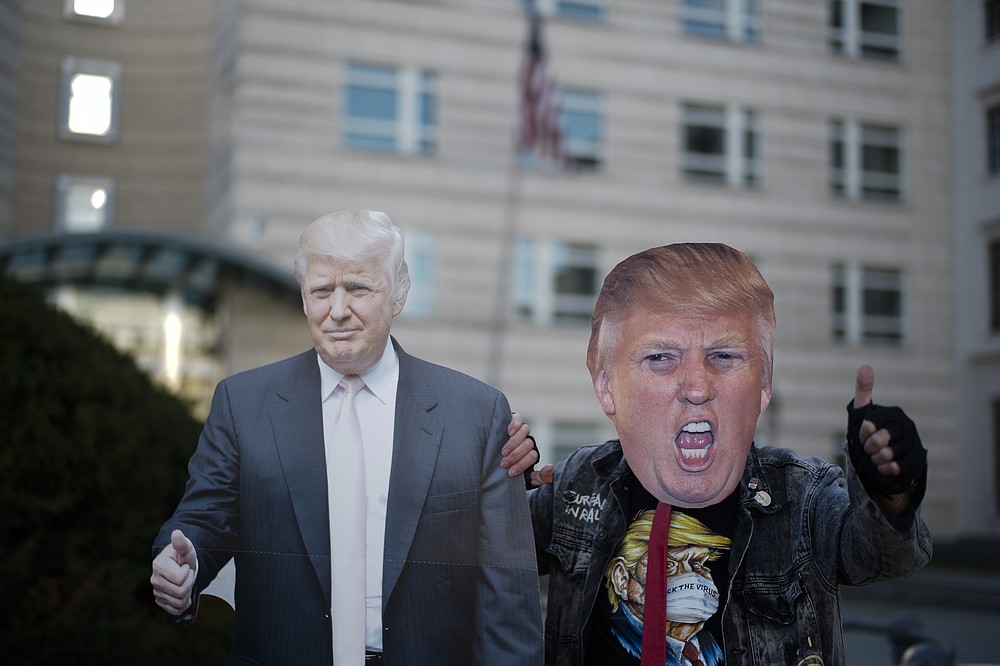 Gerd Lindner, as he said a huge fan of US President Donald Trump, poses near a paper mache effigy of Donald Trump with a Trump mask to support the President a day after the election, in the front of the United States embassy in Berlin, Germany, Wednesday, Nov. 4, 2020. (Photo/Markus Schreiber) 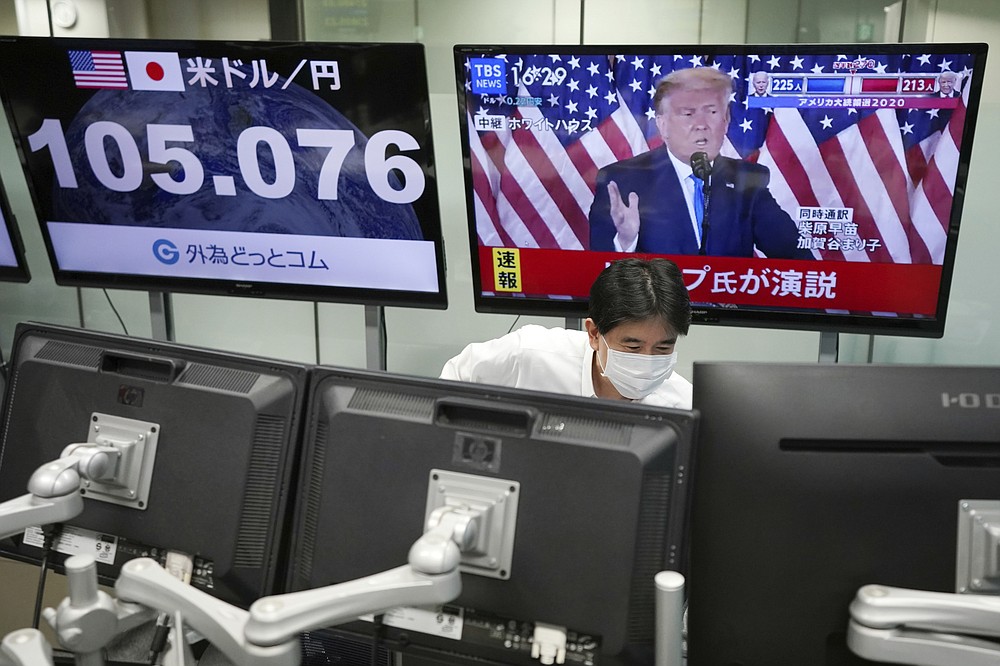 An employee works near a TV monitor showing a live broadcasting of the press conference by President Donald Trump, at a foreign exchange dealing company Wednesday, Nov. 4, 2020, in Tokyo. (AP Photo/Eugene Hoshiko) 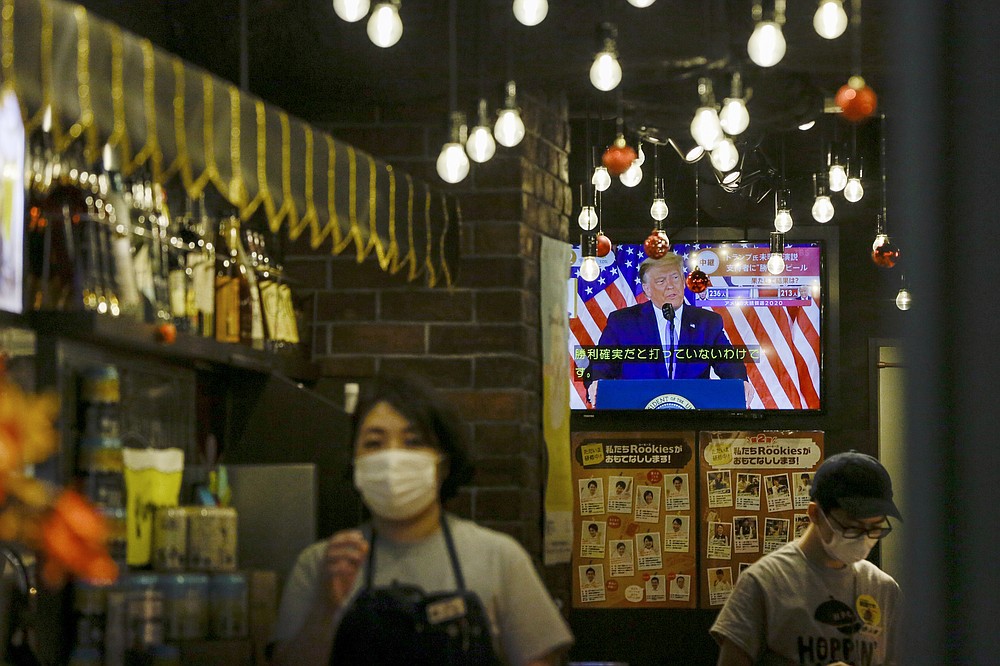 President Donald Trump speaking from the White House is projected on a television at a restaurant Wednesday, Nov. 4, 2020 in Tokyo. (AP Photo/Kiichiro Sato) 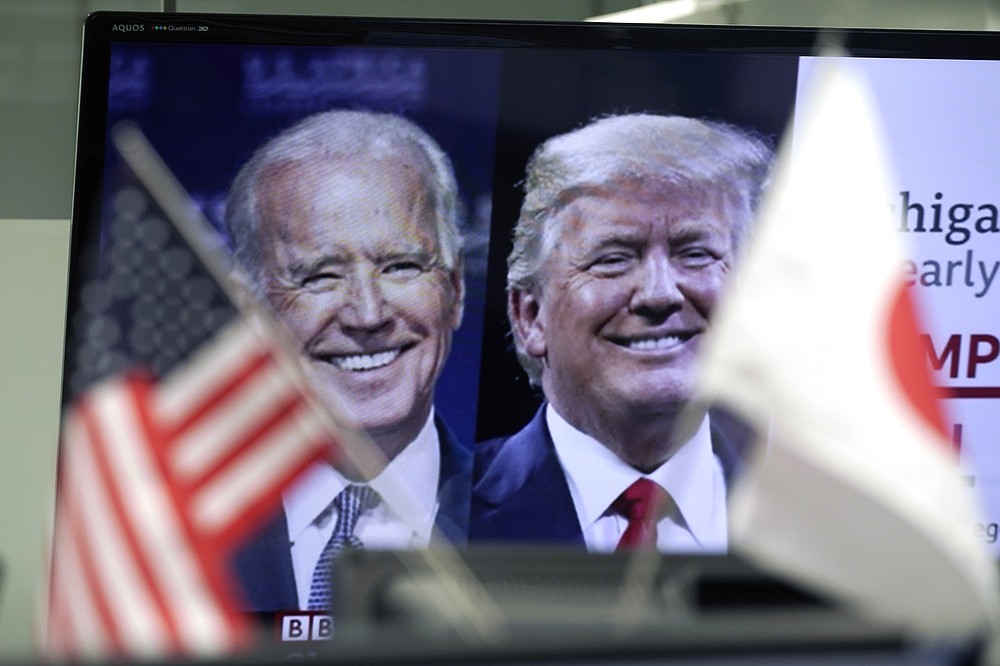 A Japanese and a U.S. flags are placed in front of a TV monitor showing a news program live broadcasting on the U.S. presidential election between President Donald Trump, right, and former Vice President Joe Biden, left, at a foreign exchange dealing company Wednesday, Nov. 4, 2020, in Tokyo. (AP Photo/Eugene Hoshiko) 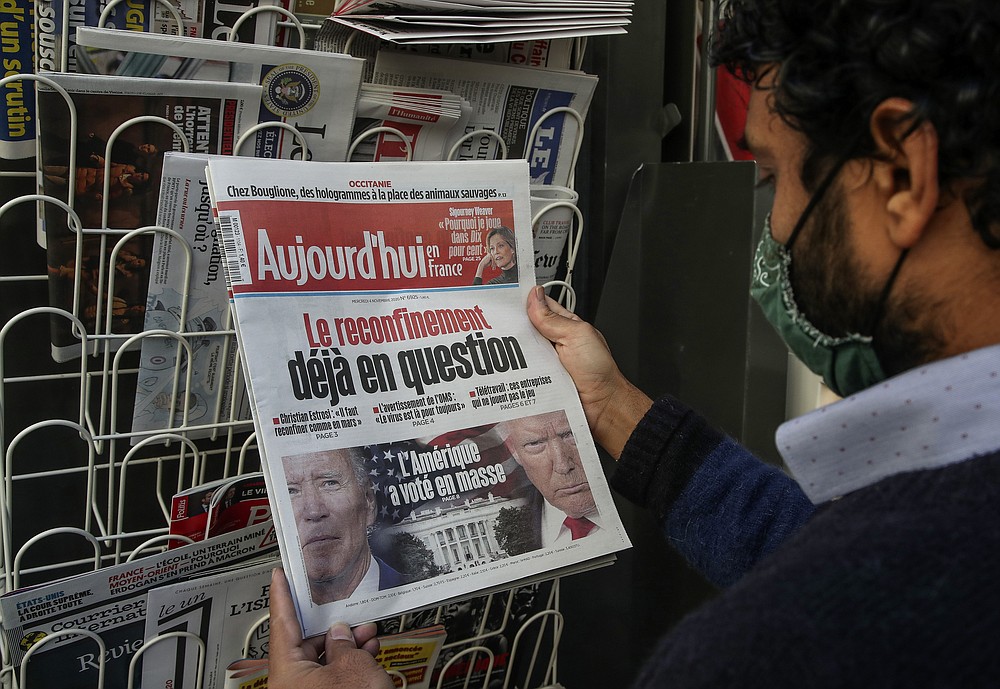 A man wearing a face mask as a precaution against the coronavirus reads the headlines about the U.S. presidential elections at a newspapers stand in Paris, Wednesday, Nov. 4, 2020. The world is watching as millions of Americans cast their ballots for the next president on Tuesday. (AP Photo/Michel Euler)
ADVERTISEMENT