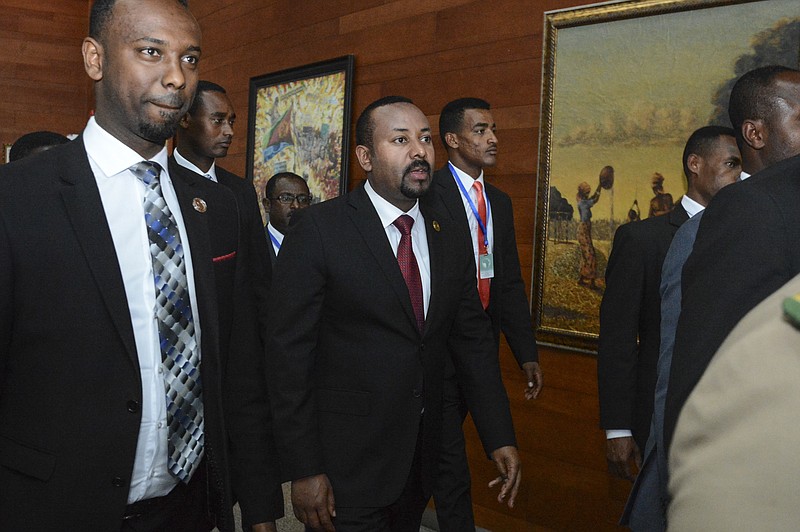 In this Sunday, Feb. 9, 2020, file photo, Ethiopia's Prime Minister Abiy Ahmed, center, arrives for the opening session of the 33rd African Union (AU) Summit at the AU headquarters in Addis Ababa, Ethiopia. Ethiopia's prime minister on Wednesday, Nov. 4, 2020 ordered the military to confront the Tigray regional government after he said it attacked a military base overnight, citing months of "provocation and incitement" and declaring that "the last red line has been crossed." (AP Photo, File)

ADDIS ABABA, Ethiopia -- Ethiopia approached civil war Wednesday as its prime minister ordered the military to confront the country's well-armed Tigray regional government, accusing it of a deadly attack on a military base and declaring "the last red line has been crossed" after months of reported provocations.

Prime Minister Abiy Ahmed's move against the Tigray People's Liberation Front, in one of Africa's most populous and powerful countries, sent a shock wave through the long-turbulent Horn of Africa region. Ethiopia's neighbors include Somalia and Sudan.

Signaling the gravity of the threat, the United States in the midst of its election drama issued a statement urging "an immediate de-escalation." The United Nations expressed "alarm" and made a similar plea.

"We have to guard against 'just another tribal African war,'" former U.S. diplomat Payton Knopf told The Associated Press. "This is much more akin to what an inter-state war would look like," with large and highly trained ground forces, mechanized units and heavy artillery. "This is not Syria, right? This is not Yemen. This is a different order of magnitude." He compared Ethiopia with the former Yugoslavia.

[Video not showing up above? Click here to watch » https://www.youtube.com/watch?v=_1zn3iW-sD0]

Internet and phone lines were cut in Tigray, challenging efforts to verify the Ethiopian government's account of events. A statement on Tigray TV accused the federal government of deploying troops to "cow the people of Tigray into submission by force" and said airspace over the region was closed.

The prime minister announced "several martyrs" in the overnight attack in Mekele, the northern Tigray region's capital, and Dansha town. The region is Ethiopia's most sensitive, neighboring Eritrea, which fought a long border war before the two countries made peace in 2018.

Abiy in a national address late Wednesday said the attack was aimed at making Ethiopia vulnerable to outside enemies, without naming names. The army late Wednesday said it had launched a counterattack and asserted "massive" damage, and Abiy said the military will conduct further operations in the coming days.

Ethiopia declared a six-month state of emergency in Tigray on Wednesday, saying "illegal and violent activities" were threatening the country's sovereignty. A Tigray TV report that the Ethiopian military's northern command had defected to the Tigray government was "not true," the prime minister's office told the AP.

The Tigray People's Liberation Front dominated Ethiopia's military and governing coalition before Abiy took office in 2018, and announced sweeping political changes that won him the Nobel Peace Prize last year. Those reforms, however, opened space for ethnic and other grievances. The Tigray People's Liberation Front, feeling marginalized by shifts in power, left the coalition last year.

Tigray officials have objected to the postponement of Ethiopia's national election because of the covid-19 pandemic, which extends Abiy's stay in office. In September the region held an election that defied the federal government and increased tensions over a region of some 5 million people that, despite its small share of Ethiopia's population of 110 million, has had outsize influence.

Last month, the federal government further angered the Tigray People's Liberation Front by moving to divert funding for Tigray to local administrations instead of the regional government.

On Monday, Tigray leader Debretsion Gebremichael warned that a bloody conflict could start, accusing Ethiopian and Eritrean leaders of making "all necessary preparations to start war" against the region. There was no immediate Eritrea comment. 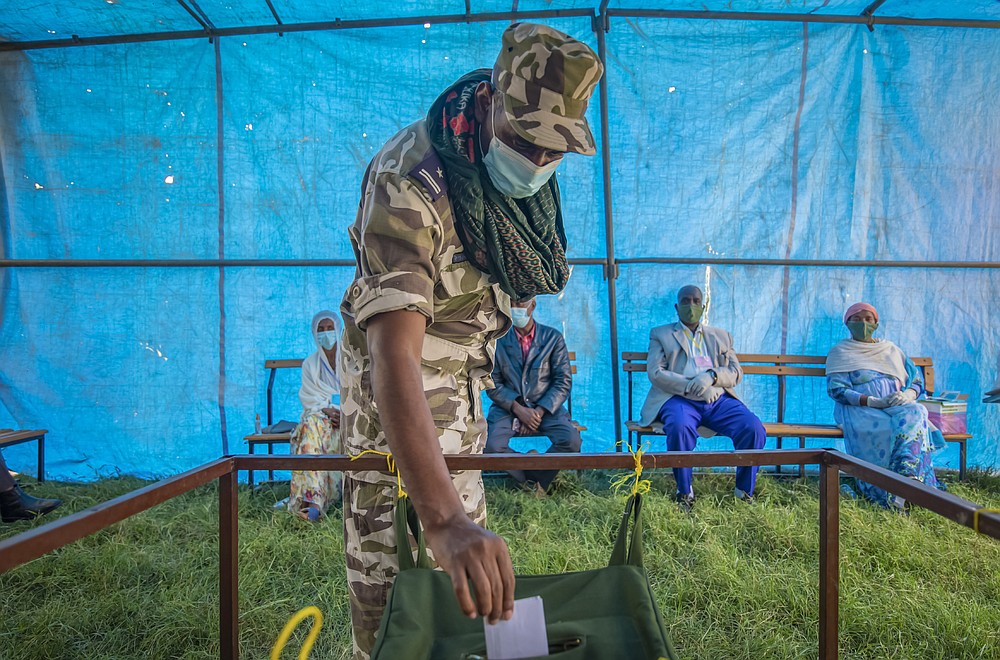 FILE - In this Sept. 9, 2020 file photo, a member of Tigray Special Forces casts his vote in a local election in the regional capital Mekelle, in the Tigray region of Ethiopia. Ethiopia's prime minister on Wednesday, Nov. 4, 2020 ordered the military to confront the Tigray regional government after he said it attacked a military base overnight, citing months of "provocation and incitement" and declaring that "the last red line has been crossed." (AP Photo, File)
ADVERTISEMENT