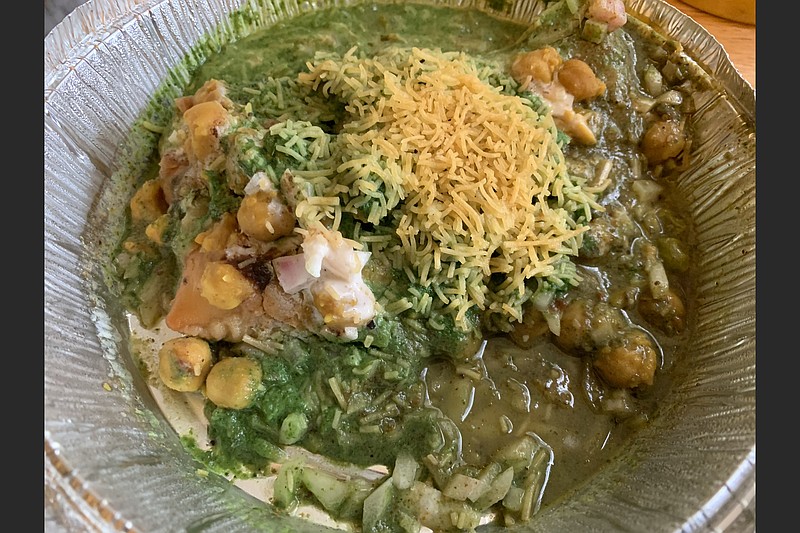 With apologies to the Supremes, of course, we’re still taking out our lunch — and dinner — from a spectrum of locally owned establishments, within a reasonable radius (to ensure our food doesn’t chill out too much during the trip home). All meals are paid for.

A then-colleague who lives closer to Saffron wrote the review shortly after the place opened a couple of years ago, so this was our first visit to this upscale (by cuisine and price) Indian restaurant. Shying away from intriguing but higher-priced entrees, we picked a panel of appetizers and were 2/3 pleased.

The duck dish was a delight, lean duck meat cooked up with crushed roasted spices in a garlic chile sauce. The menu says served “with” paratha, a flaky whole-wheat flatbread, but it’s actually served in the flatbread, which we rolled up and ate as though it was a burrito, probably the way it’s supposed to be eaten. The Samosa Chaat, from the cleverly named “Let’s Chaat” portion of the menu, was burrito-shaped rather than conical, swimming in a sea of green — cilantro and tamarind chutneys — topped with chickpeas, and though it qualifies as an appetizer, it’s plenty filling as a meal.

We were, however, disappointed by the lentil soup, for all the menu describes it as a “house specialty”; it was yellow and oily and with plenty of lentils, but didn’t have much flavor. If we’d been eating it in-house, we’d have asked a server what Indian option we could add to give it some zing, but at home, it would have had to be Chinese soy sauce or a Mexican hot sauce, and those, we felt, didn’t quite fit.

HOW IT WENT: The dining room is open; although there is an online ordering system, we were more or less in the area already, so we opted for in-person order and payment. It took about 10 minutes for our rather large order to come out of the kitchen. The gentleman who handled it wasn’t masked.

HOW IT’S GOING: There was nobody else in the restaurant in the middle of the lunch “rush,” but we did witness a pickup by a third-party delivery service. 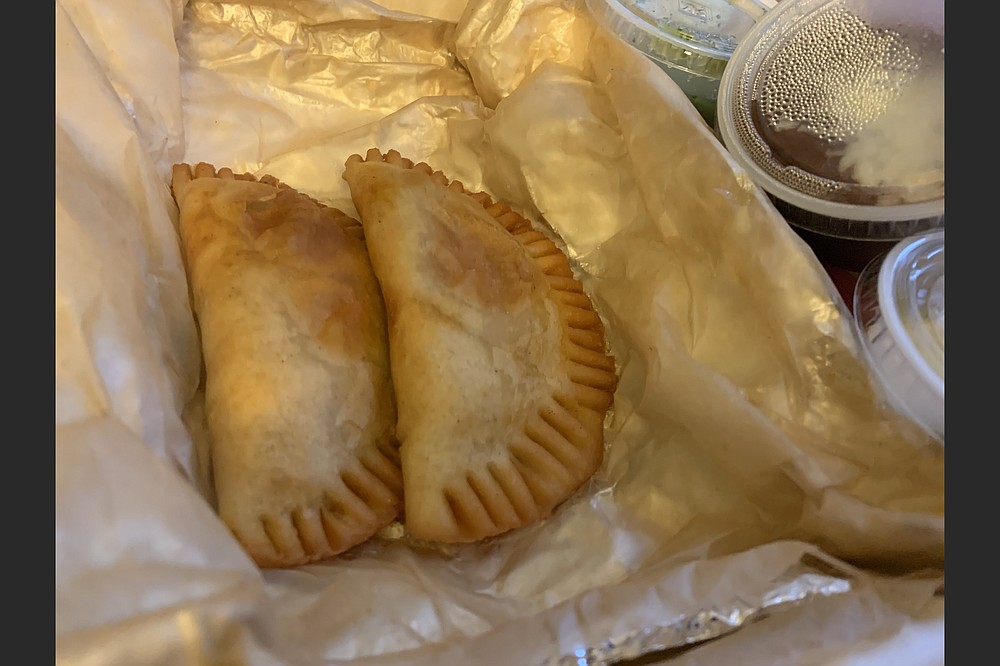 We stopped by Mockingbird at lunchtime a few days ago and got a shock: The door was locked because the place doesn’t open until 4 p.m.

We’d tried the tacos and a quesadilla when we reviewed the place almost exactly a year ago. This time we focused on the empanadas, crisp-fried, half-moon-shaped pasties filled with stuff — in this case, a supposedly spiced pork sausage from Rabbit Ridge Farms (as at his other restaurant, The Root, co-owner Jack Sundell focuses on locally sourced produce and meats) and Oaxaca cheese. Our previous encounters with the chorizo were not encouraging — it’s quite mild. The off-putting ground-beef-like consistency does, however, work better in the empanada.

Our guacamole was more exciting, a big scoop of it shoved into a round paper container that at another establishment might have been used to pack ice cream. The menu promises (and delivers) “fresh, made-to-order with mashed avocado, diced tomatoes, onions, bell peppers, cilantro and fresh-squeezed lime” — a lot of fresh-squeezed lime. It’s very citric. The large chunks of avocado give it a good texture. Otherwise, besides the lime, what predominates in texture and flavor are the onions. The menu description does not include garlic, and we did miss it.

HOW IT WENT: The dining room isn’t open, so we placed our order by phone and it was ready in the 15 minutes promised; we paid when we got there. Curbside delivery is also available.

HOW IT’S GOING: Ours was the only to-go order early in the dinner period (we should note, before 5 p.m.). 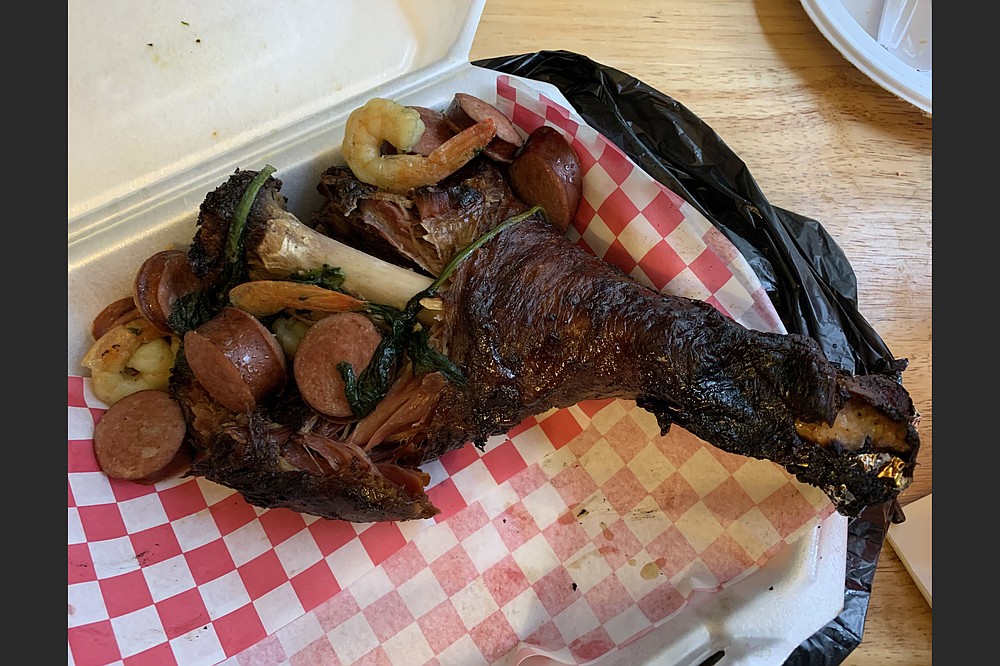 A turkey leg, split off the bone, dressed with sausage slices and medium shrimp is one of the options from the Jefferson Mobile Grilling food truck. (Arkansas Democrat-Gazette/Eric E. Harrison)

WHAT WE GOT: Turkey leg stuffed with sausage and shrimp ($15); Southwest lemonade ($3)

Jefferson Grilling specializes in those monster State Fair turkey legs, the ones that prove that birds really are descended from dinosaurs. This one, weighing a couple of pounds, was smoked, then split off the bone at the top, and “stuffed” (well, dressed, actually) with a handful of small sauteed, tail-on shrimp and slices of fine-ground link sausage. We made it through the shrimp and sausage easily enough, but eventually, after a huge effort, had to give up on the turkey leg — tasty as it was, there was just too much of it. The Southwest Lemonade is flavored with black cherry, which took a little bit of getting used to but went fine with the smoky flavor of the turkey.

HOW IT WENT: We’ve noted the food truck, which parks regularly, maybe more or less permanently, at the food truck court at Eighth and Chester streets, as a place to go back for. There’s an active smoker behind the truck. It took less than 10 minutes for our food to come out through the window.

HOW IT’S GOING: There were a couple of other customers on a recent rainy day. 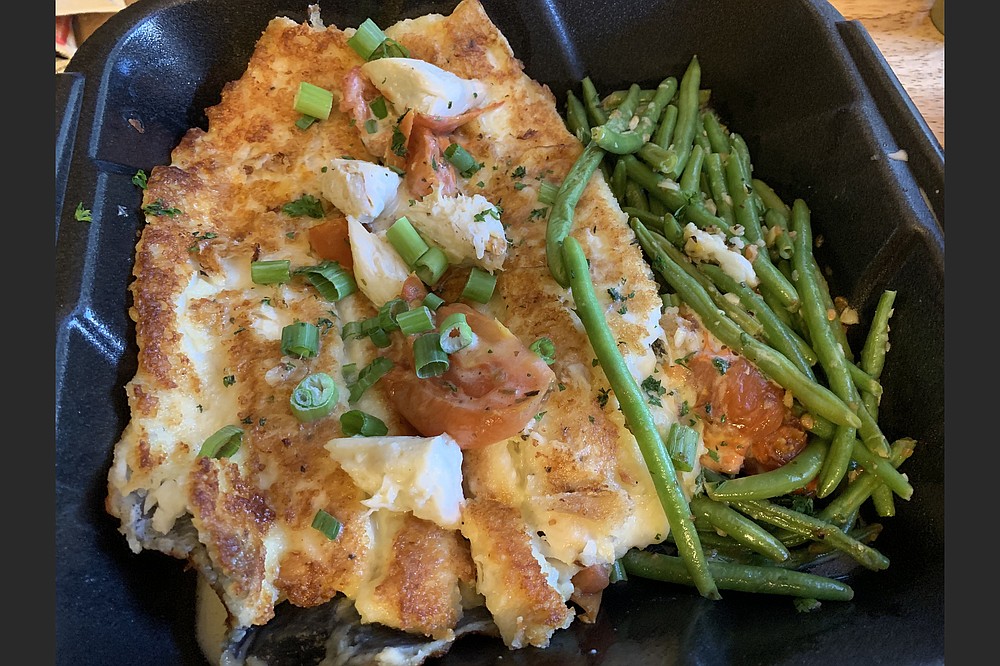 We initially raised our eyebrows at the price of a cup of soup, but when we got it home, we discovered just how much lump crab meat there was at the bottom of the plastic vessel — more than you’d get if you bought a jar of crab meat, which is expensive, at your local Kroger. (Yes, we checked.) There was also a smaller quantity of charred corn, which helped give texture to the cream-based broth, which was a little thinner than we were expecting from a bisque. A dollop of pesto on top gave the soup a heady basil aroma and a welcome additional flavor dimension.

The trout, starred on the menu as one of the chef’s favorites, could become one of ours as well: a whole filet, butterflied, with a red-brown romano crust topped with a few chunks of jumbo lump crab, oven-dried tomatoes (not as dry as we’d expected — rather gooey, in fact) and “blanco sauce.” It came with a large quantity of very garlicky, crisp haricots verts that the menu helpfully calls “French beans.”

HOW IT WENT: One of six restaurants and bars in the 300 block of Main Street, Alsopp & Chapple was closed altogether from mid-March to the first week of October. The dining room is now open. We placed our order by phone and paid when we arrived, 25 minutes later, when our food was ready as promised.

HOW IT’S GOING: This is another operation that only opens for dinner. There was a handful of tables with folks seated at them. No other to-go orders were waiting.