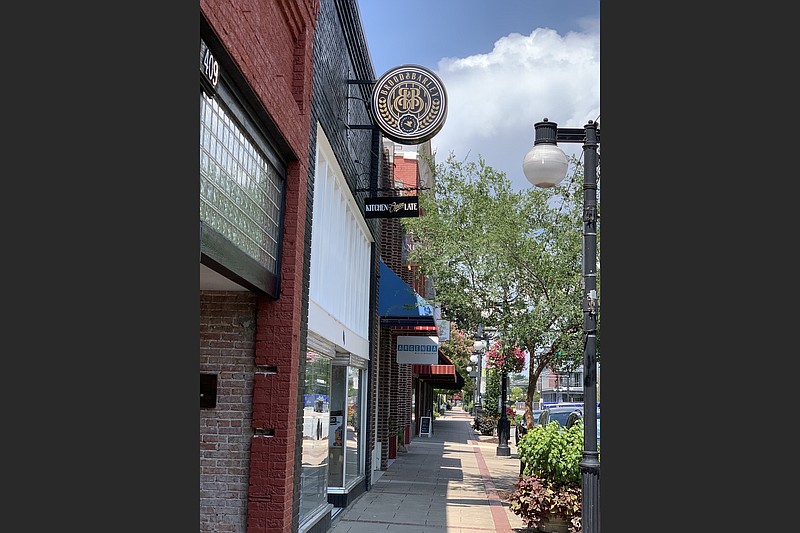 We awaited the opening of Brood & Barley, on Main Street in North Little Rock’s Argenta District, on tenterhooks, not least because the chef, Brayan McFadden, was a Philadelphia transplant and was planning to put a “Legit Cheesesteak” — in the style of Jim’s on South Street, one of the two South Philadelphia places that claim to have invented the cheesesteak — on his menu.

Outside of the Philadelphia metropolitan area, true cheesesteaks are rare — yes, yes, we see lots of menus offering a so-called “Philly Cheesesteak” but 98.8% of them aren’t made properly, and almost 100% of them are made with green bell peppers, which aren’t part of the actual recipe and at which all self-respecting Philadelphians would turn up their noses.

Well, sure enough, we made a beeline for McFadden’s “Legit Cheesesteak” ($17) as soon as Brood & Barley started doing to-go orders. (The dining room is open and on weekends — Friday nights and all-day Saturday — they set up an order station out front for patrons who want to eat out on blocked-off Main Street, where tents and tables create a two-block-long super-patio.)

We thoroughly appreciated the shaved ribeye and cheese sauce on a 12-inch roll and will happily hail it as authentic, but our expectations were too high: We were neither transported nor enraptured.

This style involves cooking white American cheese along with chopped Pilsner onions directly into the shredded steak; if you look closely at the sandwich (and the picture of the sandwich herein), you can see the cheese, but it is, to a degree, sublimated by the flavor of the meat and, to a lesser degree, of the onions. Our sandwich was a little on the dry side. The roll, which was supposed to be toasted, wasn’t, really.

Still, given our Philadelphia origins, we’ll order it again. Maybe we can persuade McFadden to add a layer of pizza sauce and a layer of mozzarella and a stint in the oven to create a pizza steak.

We tried a few other Brood & Barley items, some to-go, some under the tent out front.

The menu includes a handful of solid entrees — a braised beef rib ($25) with smoked cheddar polenta, “shaved brussels,” arugula, toasted cashews and a red pepper coulis looked like an excellent bet — but we didn’t see them on the menu at lunchtime. So we stuck mostly with the elevated pub grub, with mixed, though generally good, results.

Intrepid Companion, torn between the admittedly alluring Beer Cheese Fondue ($11) with garlic butter sauteed pretzel dumplings and the Argenta Cobb ($15), decided to eat “healthy” and chose the salad: romaine lettuce as a bed for some nifty sliced fried chicken, bacon, a hard-cooked egg, cherry tomatoes, bleu cheese crumbles, fresh avocado slices and a pickle slaw that reminded us of a Japanese cucumber salad, all with a side cup of a charred tomato and basil ranch dressing that was a very good complement, though there wasn’t enough of it to cover. She complained that the romaine leaves needed to be cut or shredded into a more manageable size.

Both of those items, which we got tent-side, came in to-go containers, the salad in a foam clamshell, the sliders in a plastic-topped aluminum pan.

Two of our three appetizer items were more impressive on the menu than on the table. Crispy Bleu Chips ($7) is a large pile of the house-made potato chips, topped with a miserly amount of “bleu sauce” and bleu cheese crumbles and a bigger quantity of green onions. The thrill ran out off long before the uncoated chips did. The Shush Strings ($8), which the menu described as “Asiago shoestring fries with Shush sauce,” and which we expected would be something similar to poutine, was an aluminum pan-ful of ordinary french fries with very little melted cheese and a few scallions. We still haven’t figured out what “Shush sauce” is — or whether there was any.

The Deep Fried Olives ($7) were more successful, if only for their novelty value: Queen olives stuffed with pimento cheese and batter-fried with lemon aioli underneath. The Scotch Deviled Egg ($11) consisted of a single split egg coated in a locally sourced sweet sausage batter and with the yolks intact (surprise!), topped with whipped lightly spicy egg yolk garnished with lemon zest and capers. We ordered it despite it being accompanied by a pickled beet salad which, the pickled beets aside, actually wasn’t too bad.

Brood & Barley, an offshoot of nearby Flyway Brewing, has a range of special-to-this-house craft beers and an impressive cocktail program, which we’ll sample one of these days.

To-go service was good — both times we called in our orders and they were waiting for us on the bar within the time specified — and we got good service on the “patio,” though our Shush Strings, which we specifically designated as a bring-out-first appetizer, came out with our “entrees.”