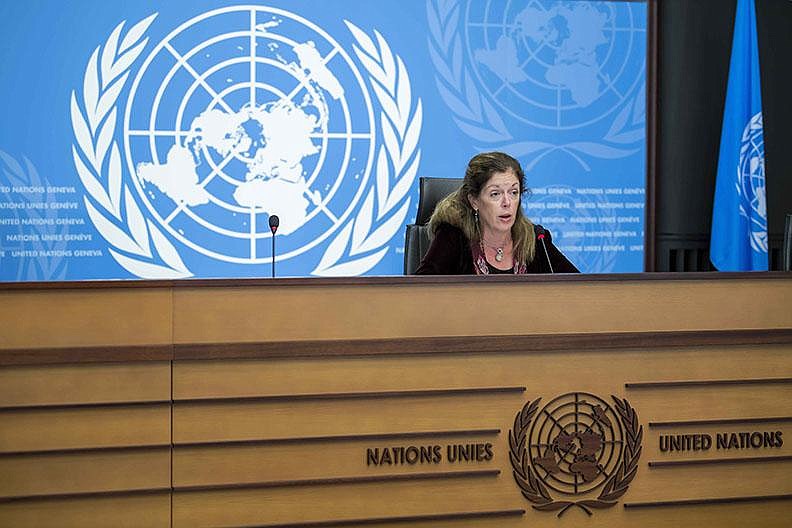 Stephanie Williams, head of the United Nations support mission, discusses the Libya military talks at a late October news conference in Geneva before the cease-fire deal was agreed on. (AP/Keystone/Martial Trezzini)

CAIRO -- Libya's rivals wrapped up their military talks with a call to the U.N. Security Council to adopt a binding resolution to implement a cease-fire deal inked last month, the U.N. said.

The two-day talks in the oasis town of Ghadames, which concluded late Tuesday, were the first face-to-face negotiations inside Libya since last year's monthslong attack on the capital by forces loyal to the east-based military commander Khalifa Hifter.

The two sides agreed to meet again in the contested coastal city of Sirte later in November, and to form a sub-committee to oversee the return of all Libyan forces to their camps, as mentioned in the Oct. 23 cease-fire deal reached in Geneva, the U.N. support mission in Libya said late Tuesday.

"This is the beginning of a process that is going to require determination, courage, confidence and a lot of work," said the head of the mission, Stephanie Williams, who headed the Ghadames talks.

She said they have discussed in detail a monitoring mechanism to implement the cease-fire agreement, which includes the departure of foreign forces and mercenaries from the oil-rich country within three months.

The agreement also called for "military deals on training inside Libya" to be frozen and for foreign trainees to leave the country. It did not name a particular country but apparently referred to Turkey, which has sent forces and mercenaries to train and fight alongside forces loyal to the U.N.-supported government in the west.

Libya was plunged into chaos after the 2011 NATO-backed uprising that toppled and killed longtime dictator Moammar Gadhafi. The oil-rich country is now split between a U.N.-supported government in the capital, Tripoli, and rival authorities based in the east. The two sides are backed by an array of local militias as well as regional and foreign powers.

Fathi Bashaga, the interior minister in the Tripoli government, arrived in Cairo on Wednesday. It was the first visit by a senior official from western Libya to the Egyptian capital since before the Tripoli offensive. Neighboring Egypt, to the east of Libya, is closely allied with Hifter and Libya's east-based administration.

The surprise visit to Egypt is part of efforts by the two countries to "fight the threat of terrorism and organized crime," the Libyan ministry said in a statement.

Bashaga has recently emerged as a powerful figure in the Tripoli government, meeting with Western diplomats and presenting himself as a dealmaker who could guide Libya out its decadelong turmoil.

The two sides urged the U.N. Security Council to urgently adopt a resolution on the implementation of the cease-fire deal, which the U.N. mission has billed as historic.

U.N. spokesman Stephane Dujarric, asked about the Libyans' call for a Security Council resolution on the cease-fire, said "a quick and unified voice from the Security Council is always helpful to the parties and our efforts to bring peace and stability."

Williams, the U.N. envoy, called on countries that have brought mercenaries and foreign fighters to the North African country to "respect the Libyan request" to withdraw them.

Thousands of foreign fighters, including Russians, Syrians, Sudanese and Chadians, have been brought to Libya by both sides, according to U.N. experts. In Geneva last month, the two sides also agreed on exchanging prisoners and opening up air and land transit across the country's divided territory.

Williams said the two sides hope to resume flights between Libya's south and elsewhere in the country.

She also said oil production has resumed after monthslong closures of oil fields and terminals by tribes loyal to Hifter. The east-based military commander announced an end to the oil blockade in September.

Citing Libya's National Oil Corporation, Williams said that production has reached 800,000 barrels a day. Before Hifter's attack on Tripoli in April 2019, Libya's oil production was at 1.2 million barrels a day.

A meeting on restructuring the oil facilities guard is scheduled for Nov. 16, with the U.N. mission and the national oil company attending, Williams said.

The rivals are set to hold political talks on Nov. 9 in the Tunisian capital. Seventy-five people from all walks of life in Libya would take part in those talks, with a goal of drawing a roadmap to presidential and parliamentary elections, the U.N. said.

Some Tripoli-allied militias have criticized the cease-fire deal and the U.N. mission. Each side in the conflict has also objected to the inclusion of some of the attendees invited to Tunis.

The U.S. Embassy has meanwhile threatened to sanction unspecified Libyans who "in concert with certain external actors" have sought to derail U.N.-led peace efforts.

Information for this article was contributed by Edith M. Lederer of The Associated Press.