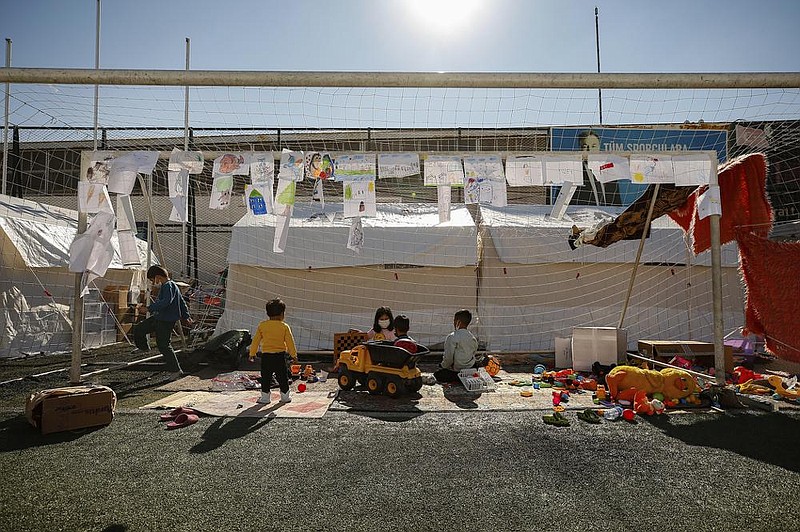 Children pass the time Wednesday near tents set up at a soccer stadium for residents who remain homeless after the Oct. 30 earthquake in Izmir, Turkey. (AP/Emrah Gurel)

ANKARA, Turkey — The death toll in last week’s Aegean Sea earthquake rose to 116 on Wednesday as rescuers in the Turkish city of Izmir finished searching buildings that collapsed in the quake.

All but two of the victims were killed in Izmir, Turkey’s third-largest city. Two teenagers died on the Greek island of Samos, which lies south of the epicenter of Friday’s earthquake. The U.S. Geological Survey registered the quake’s magnitude at 7, although other agencies recorded it as less severe.

Mehmet Gulluoglu, head of Turkey’s disaster-management agency, said search-and-rescue operations had been completed at 17 buildings that fell in Izmir. The rescue operation has been roaring at full tilt since Friday, pulling 107 survivors from the rubble.

Of the 1,035 people injured in the quake, 137 remained hospitalized on Wednesday, the agency added.

After a Cabinet meeting on Tuesday evening, Turkish President Recep Tayyip Erdogan pledged not to give up until the final person was recovered. Rescuers’ spirits were raised Tuesday when they pulled a 3-year-old girl from the wreckage of her family home 91 hours after the quake.

The tremors were felt across western Turkey, including in Istanbul, as well as in the Greek capital of Athens. Some 1,700 aftershocks followed, 45 of which were greater than a 4 magnitude.

PARIS — The French government on Wednesday banned a Turkish ultranationalist group that it accused of leading violent actions and inciting hate speech in France.

He cited an Armenian memorial near the city of Lyon that was discovered defaced last weekend. The memorial, which honors victims of the 1915 Armenian genocide, had “Grey wolf” and “RTE” written on it. “RTE” is a reference to Turkish President Recep Tayyip Erdogan.

An estimated 1.5 million people died in massacres, deportations and forced marches carried out by Ottoman Turks in what is widely viewed by historians as a genocide. Turkey denies the deaths constituted a genocide, saying the toll has been inflated and that those killed were victims of civil war and unrest.

The attack took place during a day of heavy rain, and targeted Idlib city and two towns, to the north and south. A child was killed when a shell landed near a weekly market in the city of Idlib, according to the Syrian Civil Defense, a volunteer rescue team also known as the White Helmets, and the Syrian Observatory for Human Rights, a Britain-based war monitor.

The shelling in Idlib and surrounding areas wounded 17, according to Ahmed Sheikho, a spokesman for the White Helmets.

In the town of Ariha, to the south, four people were killed, including a 4-year old child, he said. In Kefraya to the north, two children were killed, the Observatory and the White Helmets said.

The shelling took place as an eight-month truce negotiated between Turkey and Russia is unravelling.

LONDON — A giant iceberg the size of Delaware is floating toward the sub-Antarctic island of South Georgia, raising fears it could indirectly endanger young wildlife.

The British Antarctic Survey said Wednesday that it is concerned the iceberg may run aground near the island, preventing land marine predators from reaching food supplies and returning to their offspring.

Professor Geraint Tarling, an ecologist with the Antarctic Survey, said that it is the time of year when seals and penguins are tending to pups and chicks. The distance penguin and seal parents have to travel to find food is important.

“If they have to do a big detour, it means they’re not going to get back to their young in time to prevent them starving to death in the interim,” he said.

The giant iceberg, named A68, has been floating north since it broke off from the Larsen C ice shelf in July 2017, the Antarctic Survey said.

South Georgia in the southern Atlantic Ocean is a British overseas territory. 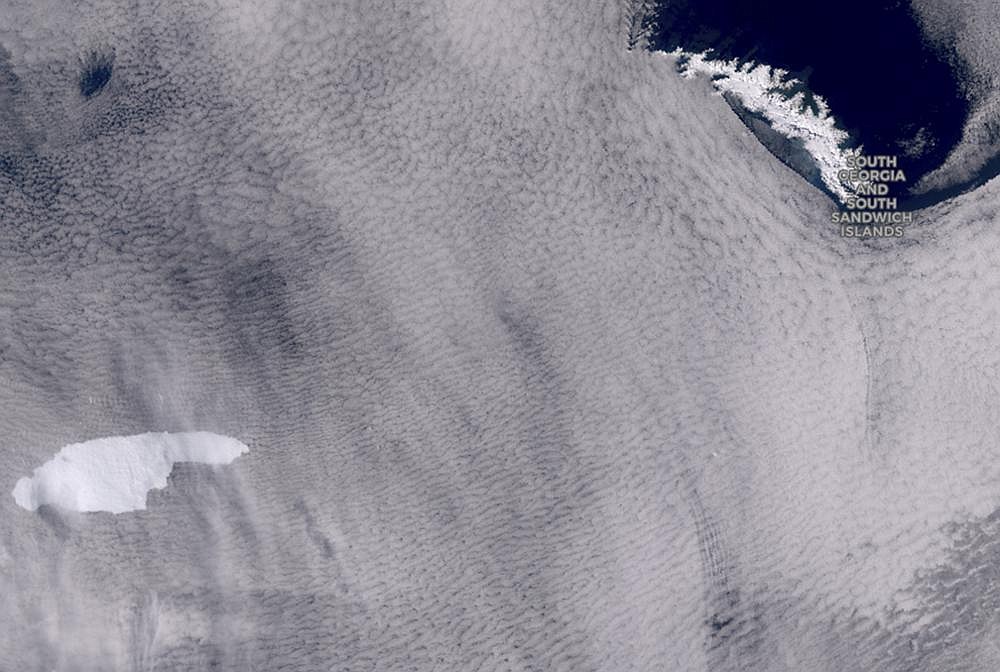