State AGs look into charges to patients for protective gear by SARAH KLIFF AND JESSICA SILVER-GREENBERG THE NEW YORK TIMES | November 6, 2020 at 7:21 a.m. 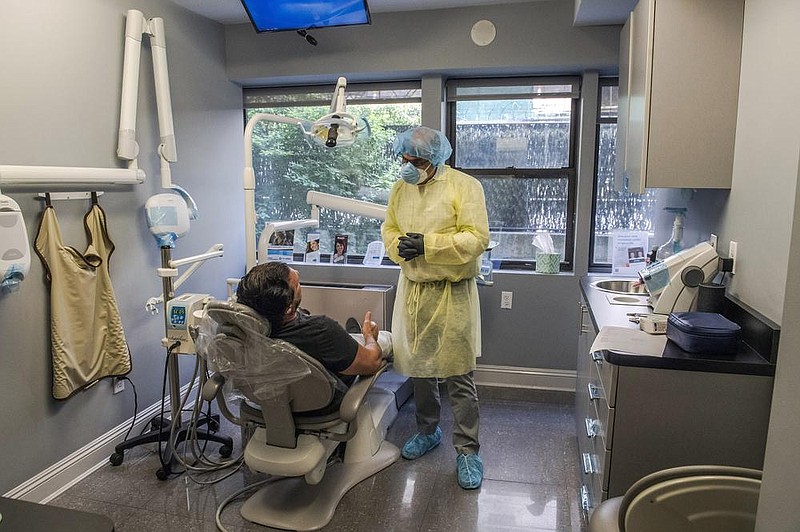 A dentist counsels a patient in late June in New York City’s Manhattan. Dentists and other health care providers have had to increase spending on personal protective gear. Some have sought to pass the costs on to patients. (The New York Times/Brittainy Newman)

The coronavirus pandemic has made the practice of health care more costly as providers must wear protective gear and sanitize equipment more often, even as they face declining revenue. To address this financial shortfall, surprise "covid" and "PPE" fees have turned up across the country -- in patients' bills.

Two groups of providers have been particularly hard hit. Dentists have lost billions since patients began postponing nonurgent dental care this spring. And assisted-living facilities, grappling with lower overall demand, have also been forced to admit fewer residents to help stop the spread of infection.

When Michael Hambley got the call from his 87-year-old mother in July, he was sure there was a mistake. She told him that her assisted-living facility, the one she paid for with her pension, was charging a one-time, $900 fee for masks, cleaning supplies and meal delivery.

Jennifer Koeckhoven had a similar experience in June: a $60 personal protective equipment charge -- tacked on to her mother's ambulance bill -- that went uncovered by insurance.

"She was already wearing a mask," said Koeckhoven, who noted that the 1-mile ambulance ride already cost $1,759 before the fee.

In New York City, Zariely Garcia was surprised to see a $45 fee tacked on to a dental cleaning in July. It was billed to her directly, not her health plan, a practice that state regulators outlawed the next month as a violation of consumer protection laws.

"It's a complicated answer, who pays for this," said Scott Manaker, a physician who is in charge of the American Medical Association's practice expense committee. "You look around the community and see additional costs being imposed right and left because of covid-19. Barbershops, pedicures and restaurants all have additional charges. It would be an undue burden to ask the medical community to bear this alone."

Some of these fees -- when millions of Americans are reeling after losing jobs and the health insurance that came with it -- have drawn the attention of state attorneys general who say that charging patients directly can take advantage of vulnerable consumers or violate health insurance contracts and consumer protection laws. The new charges range from a couple of dollars to nearly $1,000.

"The cynical view is that some see this as an opportunity: Everyone understands something unusual is going on, and most customers are ready to embrace the idea they will need to bear some expense," said Darrin Fowler, an assistant attorney general in Michigan who has been investigating coronavirus fees in assisted-living facilities. "Unfortunately, in every setting there are a percentage of folks who will take advantage of that situation."

The charges appear to be especially prevalent in dental offices, where industry guidelines suggest that fees denied by insurers are "typically billable to patients." In the spring, millions of dental patients canceled planned cleanings, and offices were shuttered with new stay-at-home orders. When dental workers returned to their offices, they used heavy protective equipment, including N95 masks and face shields.

The American Dental Association has urged dental health plans to begin reimbursing a new fee to cover the expense. Some health plans have done so, but others haven't, which can leave patients paying new bills.

Sabine Reichert decided to forgo a dental cleaning after learning she would be charged a $16 protective equipment fee. She would need to submit the claim to her insurance and, because of her deductible, would probably be responsible for the full charge.

"I thought it was ludicrous," she said. "We have a high deductible, and this year we are saying no to the things we don't really need."

Carrie McGurk, a retired lawyer in Boca Raton, Fla., was surprised to see a $15 charge tacked on to her cleaning bill in July. She said she was not informed of the fee in advance, and noticed it only after requesting an itemized bill.

"When I was putting it away in my file, I saw 'covid charge' and thought, Jeez, you could have at least told me," she said. Because she does not carry dental insurance, she had to pay the full charge.

The American Dental Association "strongly encourages" dentists to disclose any fees to patients, saying the decision to charge the fee is an "individual dental practice business decision."

Regulators in Connecticut, Maryland and New York have received numerous consumer complaints about new fees at dentist offices. All three states have warned that state and federal laws do not allow in-network health providers to tack on new fees.

"We're seeing complaints of all types," said William Tong, Connecticut's attorney general. "All the arguments in favor of billing patients are not at all compelling to me."

Much like nursing homes, assisted-living facilities have been pummeled by the pandemic. To protect residents and contain the virus's spread, they have bulked up their sanitation, increased staff pay and their testing, and invested in masks and other protective equipment.

Occupancy levels are at a record low, according to Mark Parkinson, the chief executive of the American Health Care Association and National Center for Assisted Living, the largest industry trade group, representing about 4,000 centers.

"Revenue is at record lows, and expenses are at record highs," Parkinson said, adding that the industry, unlike other heath care sectors, received federal assistance only in September.

"There is a real desire to not have to pass on any of these costs," Parkinson said.

Still, in more than a dozen states, ombudsmen, who advocate on behalf of residents in long-term care facilities, said in interviews that they worried such fees were only a fraction of what's being tacked into bills and slipped into monthly rent statements. With nursing homes and assisted-living facilities restricting visitors, there is less scrutiny of their practices. And some residents may assume that the cost is theirs to bear.

Hambley, whose mother faced the $900 charge at her assisted-living facility in Portage, Mich., had a particular reason to be skeptical: He works in the industry, running a continuous care facility in another state.

Some of the extra charges, including an $11 daily lunch fee, stood out, especially because his mother had been complaining about the quality of lunches since the start of the pandemic. "It seemed like this was an opportunity to take advantage of a population that is already vulnerable," Hambley said. "They have no visits, no engagement. And on top of that they are scared."

After Hambley complained to state regulators, the facility rescinded the fee. He asked that the place not be named because his mother still resides there, and he did not want to affect the quality of her care.

The association proposed in September that Medicare reimburse $6.57 for costs associated with protective equipment and new procedures for each visit, a fee significantly less than what some patients have already faced.

When Medicare chooses to reimburse a new medical service, private insurers have traditionally followed the public insurer's lead -- often paying two or three times more. The charge could also turn up on bills sent to uninsured Americans, whose ranks have swelled during the pandemic.

A Medicare spokeswoman declined to comment on whether the new fee would be approved, but said the agency had already "provided additional funding to support providers responding to the covid-19 pandemic." That includes billions distributed to providers through the Provider Relief Fund, and a 20% increase in Medicare reimbursements for hospitalized covid-19 patients.

For now, those patients hit with coronavirus fees say the costs, though often relatively small, add up, especially at a time of such economic uncertainty.

"It didn't break me, but they should have told me before it happened," McGurk said. "I didn't need to have my teeth cleaned just then. I could have waited until it was necessary."