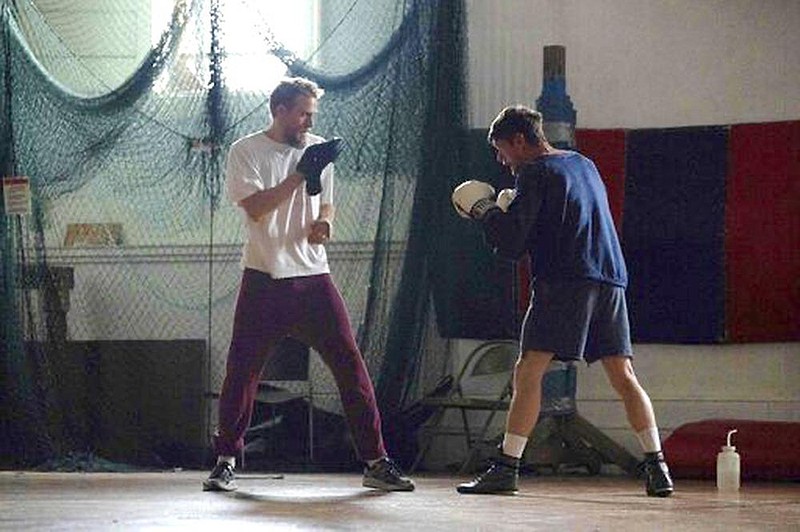 Stan (Charlie Hunnam) spars with his “special” brother Lion (Jack O’Connell) in this scene from Max Winkler’s “Jungleland,” which will be available for streaming next week.

This looks like a typical week in the new normal -- we've got three movies opening theatrically, none of which is likely to make much of an impression on the collective consciousness. But they're actual movies, the sort of things we used to encounter on a week-to-week basis.

I haven't seen "Let Him Go," or read Piers Marchant's review of the film yet, but it sounds like the kind of movie I'd like to see, because it stars Kevin Costner and Diane Lane, two actors I usually enjoy. I've interviewed both of them and while you rarely get any reliable sense of what a person might be like away from the publicity generating circuit in those interviews, they both seem OK to me.

More importantly, I relate to their onscreen entities; Costner and Lane have both been in movies I didn't like, but I've never blamed them for it. Costner famously made a couple of missteps in the early '90s (after the success of "Dances With Wolves" made him for a time the biggest movie star in the world) and he also made "A Perfect World" in that period, one of Clint Eastwood's best works as a director. And Costner's really good in it, despite attempting a Southern accent that some unfairly criticized (I know people who sound like that).

I would have probably reviewed "Let Him Go" had I not let myself get snookered into reviewing "Kindred." (One of the odd things about the pandemic is that small market critics like me -- who in a normal year might have to travel to larger cities to attend advance screenings -- are now being offered more online links to coming films than we can watch. Every day I get four or five or more invitations.)

Like I explain in my review, I was excited to see "Kindred" because I thought it was something else. And when it turned out not to be the thing I thought it was, I was disappointed. But "Kindred" is a perfectly acceptable dose of psychological horror, and I appreciated it for its restraint and the way it built tension. Psychological horror films aren't always my thing -- I might list Roman Polanski's "The Tenant" as a Top 100 -- but I tried not to penalize "Kindred" for not being what I expected it to be.

The third film to reach Arkansas theaters this week,"True to the Game 2: Gena's Story," may be primarily of interest to those who saw the first film, of which I know nothing. But it's a good thing that there are movies out there that draw enough of an audience to merit a sequel. When I was offered this film, I first assumed it was a faith-based movie about a high school football team. It is not that, it's an R-rated story about drug gangsters.

I was thrown off because it's distributed by Faith Media Distribution, which was started by music producer and manager Manny Halley when he wanted to expand into movies. The moral of the story is to read the press notes, or at least sniff around a little on Internet Movie Database.

This is the time of year when I'll start thinking about getting ready to produce a year-end Top 10 list for the final Sunday of the year, as I have for the past couple of decades.

Last week, we ran Piers Marchant's thoughts on the best films of the year, and I generally agreed with his choices, though I wondered about the absence of the Netflix drama "I'm Thinking of Ending Things." I asked him in an email why. Didn't he care for it?

It wasn't that. He simply hadn't seen it yet.

Which is something most of us could say about 90% of the content released this year.

One film that's apparently not opening here this week, though it is opening in theaters on a limited basis, is Max Winkler's remarkably tender bare-knuckles boxing film "Jungleland." It stars Jack O'Connell of "Unbroken" as Lion Kaminski, a formed boxer reduced to fighting in underground bouts. His older brother Stan (Charlie Hunnam) is his chief enabler -- his cornerman, coach, sparring partner and bookie. Lion fights, Stan handles the business.

It's pretty standard -- but remarkably well-done standard and doesn't wallow in sentimentality. It might open here at a later date, and will be available for rental on the usual streaming services beginning Tuesday.