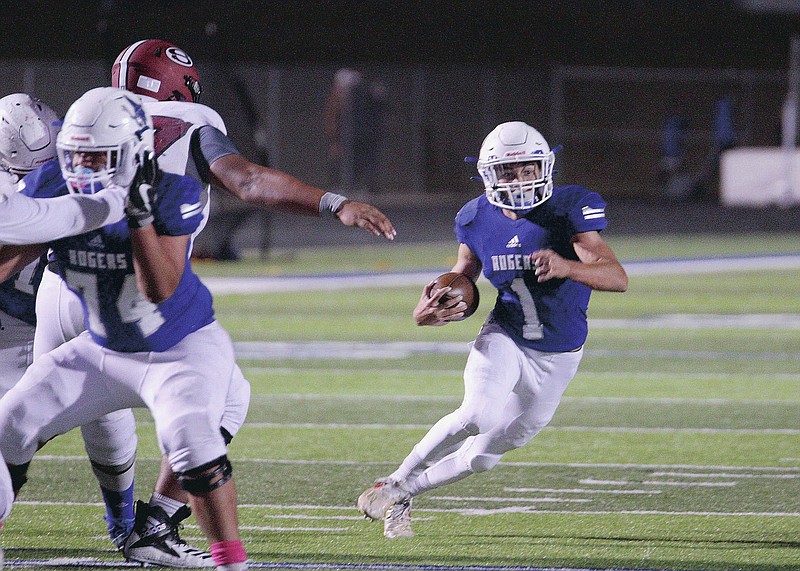 Rogers Mountaineers Senior Christian Francisco (1) scrambles out of the pocket in the game against the Springdale Bulldogs Friday, October 16, 2020, at Whitey Smith Stadium, Rogers, Arkansas (Special to NWA Democrat-Gazette/Brent Soule)

ROGERS -- Chris Francisco can beat opponents with his arm, his legs and his brain.

The Rogers High senior put himself among rare company when he threw for 303 yards and five touchdowns and rushed for 203 in a 44-34 win over Springdale High three weeks ago.

Rogers football coach Mike Loyd said he's often suggested plays to run, but Francisco was thinking a little quicker than his coaches were during the waning moments of the win over Springdale.

"We get a first down and I'm asking coach (Chad) Harbison 'What are you thinking here?'" Loyd said. "And Francisco was like 'No, we can take a knee three times and it's over.'

"We were trying to figure out if we needed to run another play and he had it already figured out. I said 'Go ahead man, you got it."

That capped a night where the 5-foot-9, 170-pound quarterback with an ACT score of 35 did something that no other quarterback has done in Arkansas high school football history. He became the eighth player to go for 200 and 200. That's been done only 10 times, but he's the only one to do it in the state's largest classification.

Loyd has coached quarterbacks who went on to start in the Southeastern Conference and the Big 12, but admitted Francisco's performance was something special.

"I've had great ones, I've had nine start in the SEC and Big 12, never have I had one go for 300 and 200," said Loyd, who also played the position in the NFL for a couple of seasons with the St. Louis Cardinals and in the USFL. "I've had them start at Tennessee, South Carolina, Kansas and I've coached in parts of five decades and been a head coach 34, 35 years. That's just phenomenal.

Francisco started at defensive back as a sophomore and at receiver last season. That versatility has helped him prepare to be a starting quarterback.

"I know defensive tendencies and how those defensive players are thinking," Francisco said. "I know how my receivers are thinking and how I can throw them the ball where they are comfortable catching it."

It's worked out well for Francisco and the Mounties. He's completed 121 of 198 passes (61 percent) for 1,903 yards and 25 touchdowns compared to just two interceptions. The senior is also the team's leading rusher with 584 yards and seven touchdowns.

Those totals are also in only seven games since the Mounties (5-2, 2-2 7A-West) were forced to cancel two games because of covid-19. Francisco was among the entire starting offensive unit in quarantine.

Francisco said he and the rest of the Mounties weren't going to let the issues with the virus derail their season. He helped engineer a huge 49-42 win over Springdale Har-Ber on Friday, throwing for six touchdowns and running for another. Francisco accounted for 469 yards of total offense in that game.

That performance has gotten the attention of college coaches at all levels. Loyd said he will likely play receiver at the next level, but quarterback isn't out of the question depending on where he ends up. That's still to be determined.

Francisco has an offer from Division II Harding and is looking at several Division III schools with strong academics like Johns Hopkins or MIT. But a couple of D-1 schools have also shown interest lately.

He recently got a call from Miami (Fla.), where former Mountie quarterback Johnny Brewer is on staff as an analyst. Francisco has an offer to go there as a preferred walk-on.

So he's got some thinking left to do as it relates to his future. But the one thing he's sure of is he wants to continue to play football.

"It's crazy to think about, really," Francisco said. "When he called I was really star-struck. But I've been playing tackle football since I was 5. I just love the competition. It's the best part of my day. I get to come out here with my teammates, my best friends and we get to compete.

"I love every workout, every game, every practice."

Rogers offensive coordinator Chad Harbison said Francisco has even surprised him with the improvement he's made throwing the football. But that's because of his tremendous work ethic, Harbison said.

"He's naturally athletic, can take off and run with it and has pretty good vision," Harbison said. "He's throwing the ball probably a lot better than anyone anticipated. But he's worked at it. If he misses a throw, he'll get it right the next time. He finds a way to get it right. He understands. He studies it."

Harbison also said they've put more on Francisco, who's also added 15 pounds this year thanks to offseson work in the weight room, because they know he can handle it. Trusting his decision-making has paid off as the Mounties have committed just four turnovers in seven games.

"If we're in a bad play, he's got enough knowledge to check us out and get us in something better," Harbison said. "He's making a lot of decision pre-snap and he makes the right decision most of the time."

Harbison said the group plays well together but Francisco's leadership is a key.

"Those guys play hard together," Harbison said. "We've got some guys around Chris and it's kinda cool to see he trusts all those kids and they trust him."

Francisco and the Mounties are now focused on their next opponent and that's crosstown rival Rogers Heritage on Friday in the regular-season finale. He wants to help leave a lasting legacy at Rogers High.

"Right now we're fighting for the highest playoff seed we can get," Francisco said. "We want to host a playoff game. I don't think that's been done since the split. Our culture has really changed here We're a different Rogers than other people thought. Our players and coaches have done a great job changing that culture."

NOTABLE Played defensive back as a sophomore, receiver as a junior before starting at quarterback as a senior for the Mounties. … Scored 35 on the ACT with a super score of 36. … Has a scholarship offer from Division II Harding, preferred walk-on spots from Miami and Rice and is also considering several outstanding academic Division III schools such as MIT or Johns Hopkins. … Leads the team with 584 yards rushing on 85 carries (6.9 avg) with seven touchdowns along with thrown for 1,903 yards and 25 touchdowns and just two interceptions and has completed 121 of 198 passes (61 percent).