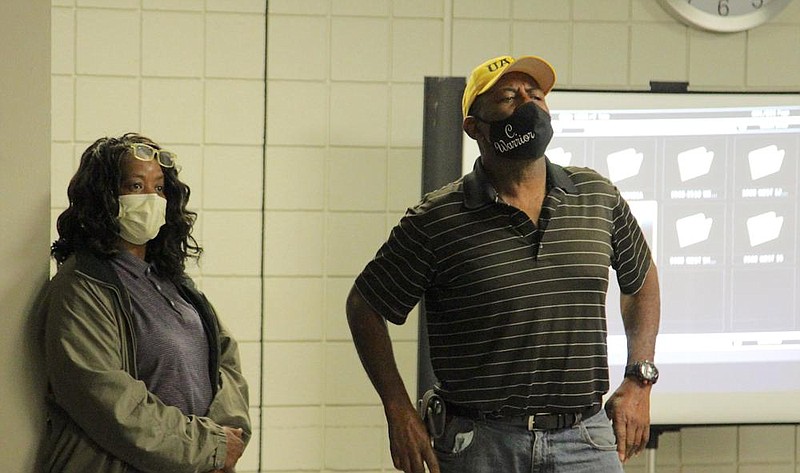 Pamela Williams and her brother, Chris Warrior, express their opposition to a proposed shelter that the Pine Bluff office of Economic and Community Development has proposed to locate in their neighborhood at West 16th Avenue and South Chestnut Street. The two produced a petition signed by 45 people in the neighborhood opposing the shelter. (Pine Bluff Commercial/Dale Ellis)

A proposed shelter for families with children who are homeless or in danger of becoming homeless and who are affected by exposure to the coronavirus has met with vigorous opposition by residents of the neighborhood where the building intended for the shelter is located.

Council Members Win Trafford and Glen Brown Jr. were presented with a petition on behalf of residents living in the area of 304 W. 16th Ave., the location of a fourplex apartment building that is the site of the proposed shelter, by Chris Warrior, a resident of the neighborhood, during a Development and Planning Committee meeting this week.

Brown and Trafford referred the matter for a hearing, its second before the City Council, on Nov 16. The proposal was first presented to the Planning and Zoning Commission in late September and was turned down by a tied vote of 3-3. The matter was appealed to the City Council in October and was sent back to the Planning and Zoning Commission for further review.

After Planning and Zoning rejected the proposal a second time, by a vote of 6-0, the Economic and Community Development office in Pine Bluff, which sponsored the proposal, appealed the matter once again to the City Council, which will hear the appeal at the Nov. 16 meeting.

"We have youth activities in our neighborhood, we have block parties, the whole nine yards," Warrior told the committee. "For homeless shelters like this, they have a 400-yard radius that everybody's going to have problems, stealing, robberies, people breaking in, that's from homeless shelters. We're here to say please don't allow this to happen in our neighborhood."

Warrior said the fear of people in the neighborhood is that locating the shelter there will lead to a rise in transient traffic through the area, an increase in drug dealing, prostitution and other criminal activity.

On Thursday, Lori Walker, economic development specialist with the office of Economic and Community Development, told the Pine Bluff Commercial that the shelter, which is to be financed through an Emergency Solutions Grant authorized through the Coronavirus Aid, Relief, and Economic Security Act, is intended to assist families that are homeless or in danger of becoming homeless, but she said the facility, if established, is not intended to be a transient homeless shelter.

"This is to prevent the spread of covid," Walker said. "You might have families who are doubled up, now that's one category of homelessness, and if there's one person in the household who contracts it and there's crowding, that gives them the opportunity to come to another place. Not necessarily the person who has covid but maybe those who don't have covid because we want to minimize the spread as well."

Walker did confirm, however, that the grant is to assist homeless families. She said in Jefferson County alone, according to numbers compiled last year, there are over 150 homeless children in the county who are receiving services under the McKinney-Vento Act, legislation that was designed to address the challenges that homeless children and youths have faced in enrolling, attending and succeeding in school.

"Not all the families we're looking at are homeless," she said. "Some are staying with family or friends, but they don't have the means to sustain housing on their own. Many of the children are receiving services through their school, but the one thing the schools cannot assist them with is housing."

Walker said the idea behind the shelter is to house families in a homelike setting rather than an institutional setting to provide the children with an atmosphere that feels more like home.

"We are providing assistance to families, and we think it's important to stabilize the environment for the kids for their academic well-being," she said. "On some level, I know that when you say homeless it creates a negative connotation, but we're not trying to negatively impact the neighborhood. We just want to help the kids."

But the residents of the neighborhood are saying, despite the desire on the part of the office of Economic and Community Development to help these families, that they fear putting such a facility in their neighborhood will only further destabilize an already teetering area of the city.

Matthew Pate, a statistician for the Pine Bluff Police Department who has lived in the neighborhood since 1995, said regardless of the goals set out by the community development office, the reality is that such facilities rarely, if ever, help to stabilize already unstable neighborhoods.

"In most of the studies that I have read, and these are peer-reviewed studies published in academic journals," Pate said, "locating a large homeless shelter in the middle of an established residential neighborhood is seldom good for the residents of that area."

Pate said the working class, owner-occupied neighborhood he moved into 25 years ago, has in the past quarter-century declined significantly, despite efforts on the part of many of the longtime residents to halt the trend. He said that locating such a facility there could make such efforts even more difficult.

"There are some studies that show dramatic increases in property crime, drug crime, vice-type crimes and even some violent crimes when homeless shelters are placed in such predominantly residential neighborhoods," he said.

Pate said he does not oppose efforts to assist people such as those the community development office proposes assisting, but he said the location itself is problematic because of the precarious nature of the neighborhood.

"Society does have a moral obligation to help people who are the most vulnerable among us," he said, "However, the location that they've chosen for this particular shelter further imperils a neighborhood that is already teetering on the brink of absolute dysfunction.

"We know that a shelter like this would never be placed in one of the more affluent neighborhoods," he added.

Warrior told The Commercial that he and many other residents in the neighborhood make a concerted effort to provide activities, neighborhood get-togethers, and to act as mentors to the younger people who live there.

"We do block parties, get-togethers, Christmas, Easter, you know, holidays, we do Thanksgiving," Warrior said. "We try to work the neighborhood the best we can and to give the youth in the neighborhood something positive to do."

Warrior said he fears those efforts could be jeopardized by a shelter.

"We're talking about a place they can go to live and maybe it's a transition for them," he said. "But the only thing they're going to do is to bring the bad things with them, the prostitutes, the drug use, and I'm not just making up something. I know for a fact because we've done dealt with them."

Council Member Joni Alexander, who also lives in the neighborhood, was emphatic in her opposition to the facility.

"I'm totally against it," she said. "Community Development is always talking about how they want community input. Well, the community, the people in this neighborhood, are telling you we don't want it here."

The appeal hearing is scheduled for Nov. 13 at 5:30 p.m. at the Pine Bluff Convention Center. Masks and social distancing are required.