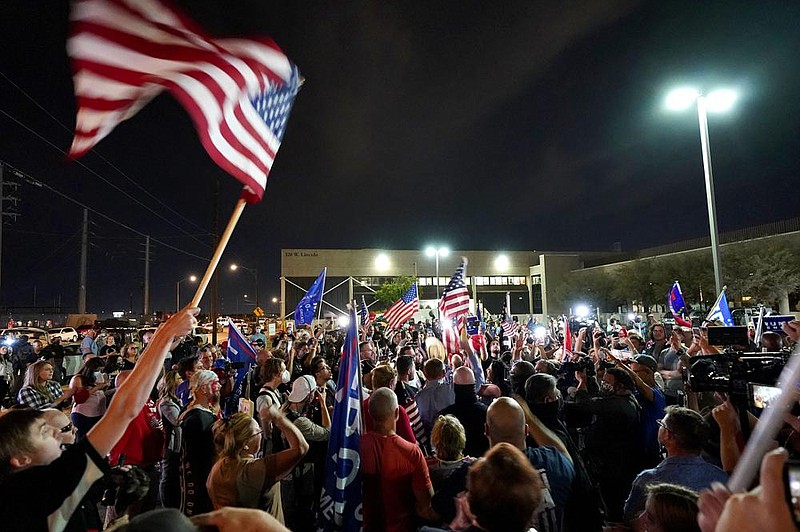 Election officials in several states said Thursday that they are worried about the safety of their staffs amid a stream of threats and gatherings of demonstrators outside their doors.

"I can tell you that my wife and my mother are very concerned for me," said Joe Gloria, the registrar in Clark County, Nev., which includes Las Vegas. He said his staff was bolstering security and tracking vehicles coming and going from the election offices.

But he added that he and others would not be stopped from "doing what our duty is and counting ballots."

Groups of President Donald Trump supporters have gathered at vote tabulation sites in Phoenix, Detroit and Philadelphia. The protests have not been violent or very large.

[Video not showing up above? Click here to watch » https://www.youtube.com/watch?v=Hgpl4DAtVSA]

Police in Seattle and Portland, Ore., arrested more than a dozen people as hundreds took to the streets to demand a full count of all presidential election votes and a halt to Trump's court challenges to stop counts in some key battleground states, officials said.

In Portland, protesters against Trump began rioting, smashing windows at businesses and hurling objects, including fireworks at officers. Police made at least 10 arrests, according to a statement from the Multnomah County sheriff's office.

One of the people who was arrested had a rifle with a magazine of ammunition, fireworks, a knife and was wearing a ballistics vest, the sheriff's office said.

In Washington, people arrived at Black Lives Matter plaza near the White House to find newly installed concrete vehicle barriers, signaling that the city was preparing for larger crowds. But Thursday, there seemed to be more members of the media gathered there than protesters.

"We came out here in case they announced Biden, but it looks like they won't," she said. "I don't know what to do. I'm anxious."

"Asking them to shove sharpies in uncomfortable places is never appropriate & is a sad commentary on the state of our nation," wrote Nessel, a Democrat, referring to a claim that Trump supporters were told to fill out ballots with Sharpie markers instead of regular pens, which would cause their votes not to be counted by the machines.

Arizona Secretary of State Katie Hobbs, speaking on CNN, said her main concern was staff safety but that sheriff's deputies were providing protection. She said the protesters were "causing delay and disruption and preventing those employees from doing their job."

Authorities at the center used fences to create a "freedom of speech zone" and keep the entrance to the building open. The crowd took turns chanting -- "Count the votes!" and "Four more years!" -- and complaining through a megaphone about the voting process.

They paused to listen as Trump spoke from the White House on Thursday night and cheered when the president said, "We're on track to win Arizona." The Associated Press called Arizona and it's 11 electoral votes for Biden on election night propelling him to 264 electoral votes, however counting is continuing.

Tom Haas, 50, who said he was visiting Atlanta from Chicago on business, said he was convinced that Trump had won the election. "There's obvious voter fraud, and it's coming out of the larger Democratic-run cities," he said. "Atlanta is one of them."

"Our democracy is under attack," he said. We're losing America, because we're losing a fair election for the nation."

Simone Michaud, a stay-at-home mother from Marietta, an Atlanta suburb, said she was there to "represent women of color and females in general," adding, "we have one of the best presidents."

In Detroit, a few dozen Trump supporters gathered outside the city's convention center Thursday morning as election workers counted absentee ballots inside. The protesters held signs that read, "Stop the steal" and "Stop the cheat."

Latino Republican groups offered a warning on a Facebook page called Stop the Steal: "They're trying to steal this election from the President Donald J. Trump and we're not going to let it happen."

The group had amassed more than 350,000 members before Facebook took it down.

In Seattle, seven people protesting Trump were arrested on Capitol Hill and one person who was being arrested for damaging property was taken to a hospital after "experiencing a medical episode," police said in a statement early Thursday.

Others were arrested on suspicion of obstruction, pedestrian interference, property damage, resisting arrest and assaulting an officer.

Police said it was unclear whether the person's medical issue was related to the arrest. The person was initially hospitalized in critical condition but later was upgraded to serious condition, Harborview Medical Center spokeswoman Susan Gregg said Thursday morning.

Gov. Kate Brown had activated the use of the state National Guard to help local law enforcement manage unrest related to the election, the Multnomah County sheriff's office said.

On Wednesday, demonstrators in Portland held signs saying, "Count Every Vote," and "Keeping Hope Alive." Suzanne Thornton, 79, said she was motivated to attend a protest for the first time because of Trump's court challenges.

"Our president seems to be making such a big deal about it, and we need to clarify what the vote count is for. He doesn't seem to get it," Thornton said. "I don't have a lot of patience with him because he is such a baby, and I don't see how so many people in this country see him as a leader."

Protesters in Seattle said they are also trying to make sure the Black Lives Matter movement and other social justice causes remain in the spotlight.

A day of peaceful demonstrations in New York City's Manhattan on Wednesday turned into clashes between protesters and the police after night fell, leading to nearly 60 arrests.

The protesters had briefly shut down traffic in the neighborhood while chanting slogans like "every city, every town, burn the precincts to the ground" as they passed boutique restaurants where patrons were enjoying dinner on an unseasonably warm evening. 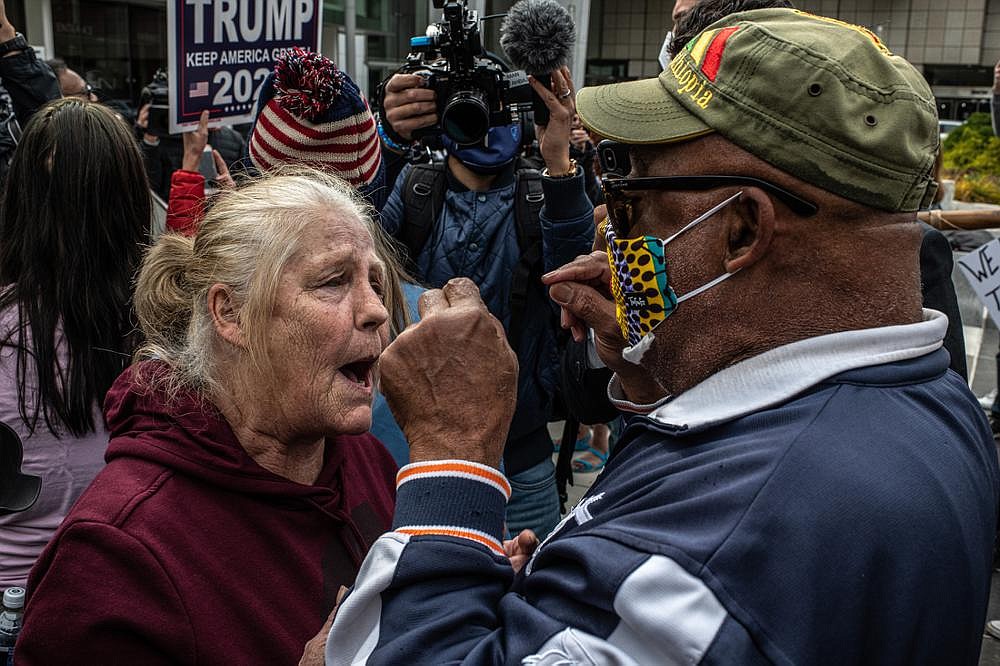 A supporter of President Donald Trump (left) and another protester argue Thursday during a rally outside a convention center in Detroit, where ballots were being counted. Some pro-Trump protesters held signs that read, “Stop the steal” and “Stop the cheat.” (The New York Times/Bryan Denton) 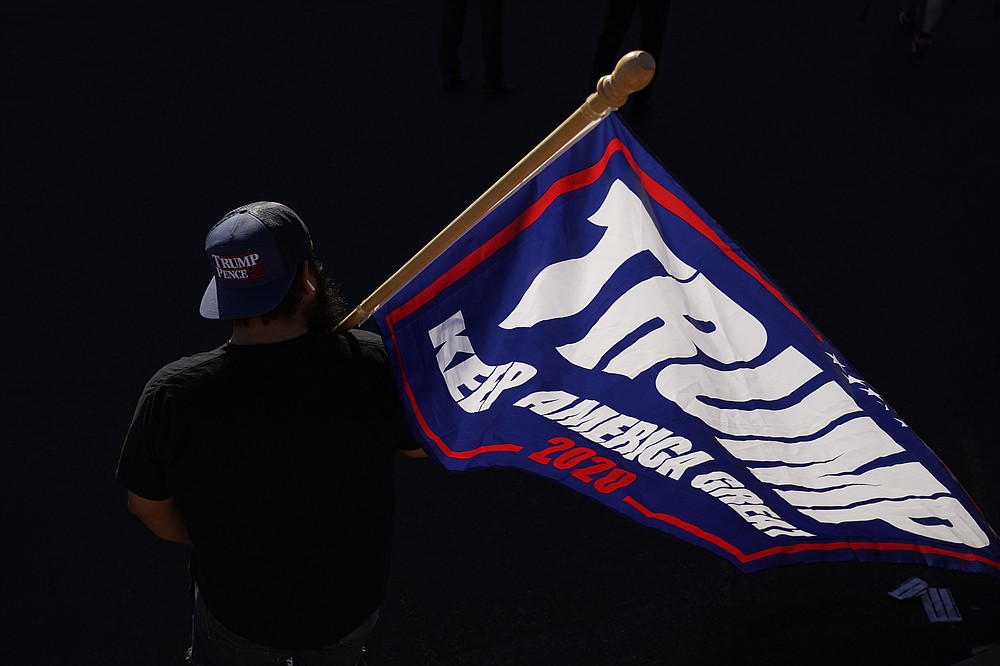 A supporter of President Donald Trump carries a Trump flag before a news conference by the Trump campaign in front of the Clark County Election Department, Thursday, Nov. 5, 2020, in Las Vegas. (AP Photo/John Locher) 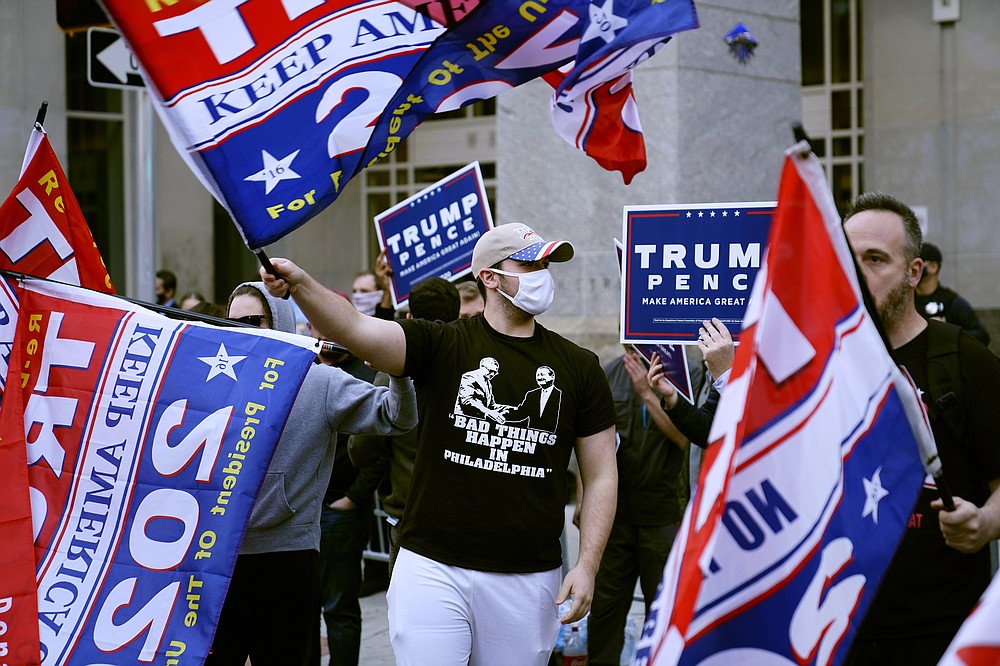 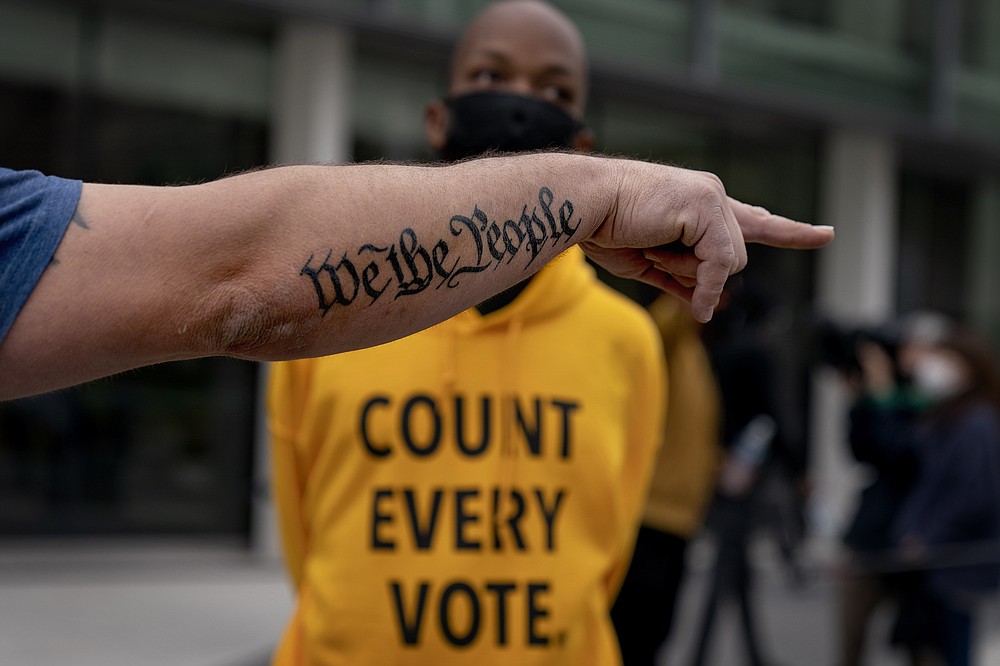 The tattoo "We The People", a phrase from the United States Constitution, decorates the arm of Trump supporter Bob Lewis, left, as he argues with counter protestor Ralph Gaines while Trump supporters demonstrate against the election results outside the central counting board at the tcf Center in Detroit, Thursday, Nov. 5, 2020. (AP Photo/David Goldman) 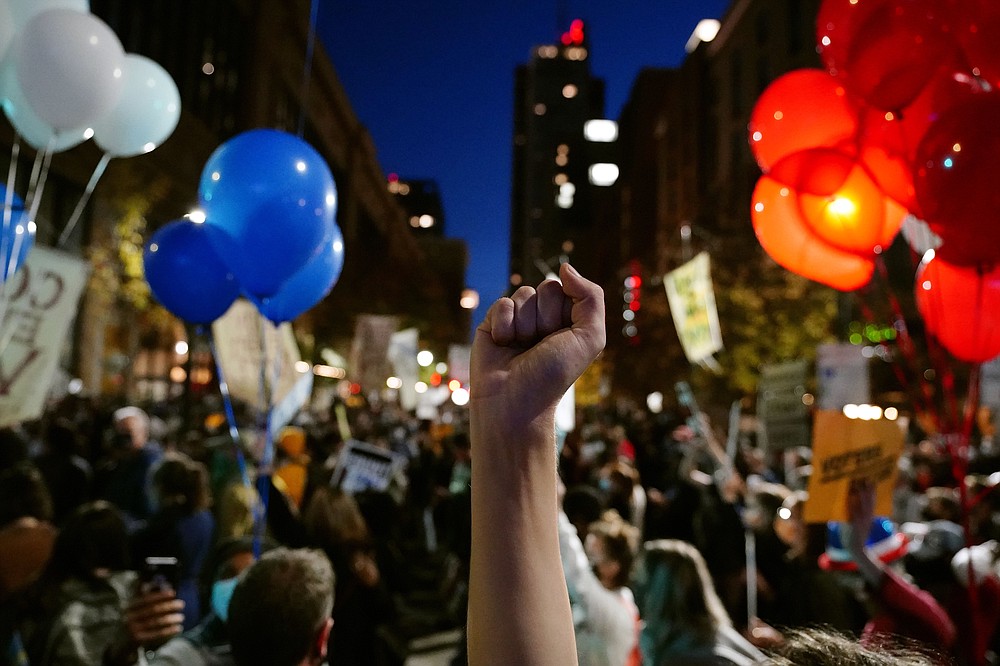 People urging that all votes be counted demonstrate outside the Pennsylvania Convention Center where votes are being counted, Thursday, Nov. 5, 2020, in Philadelphia, following Tuesday's election. (AP Photo/Matt Slocum) 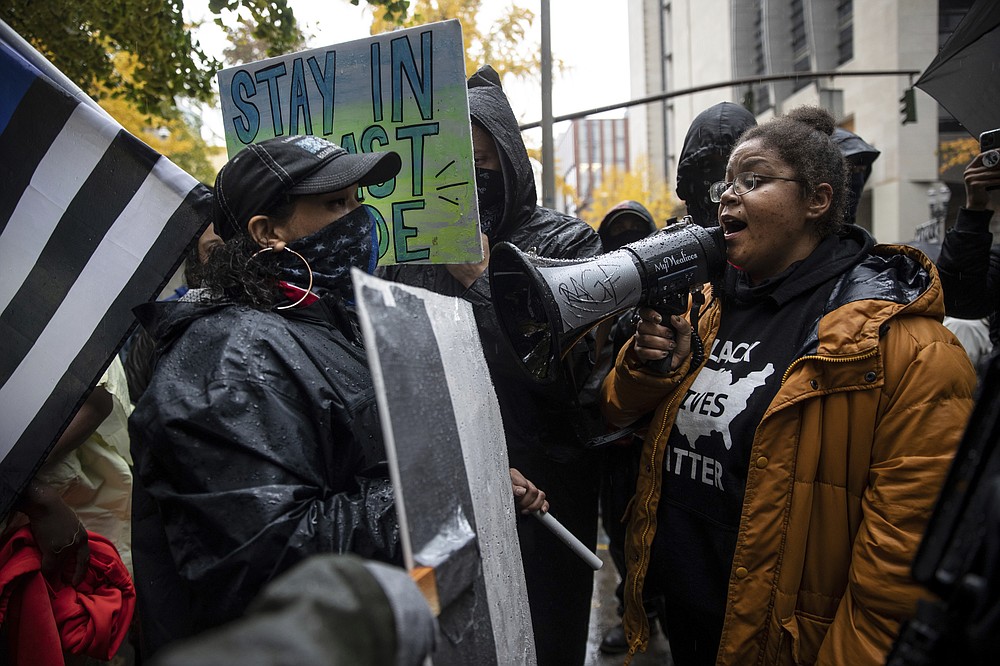 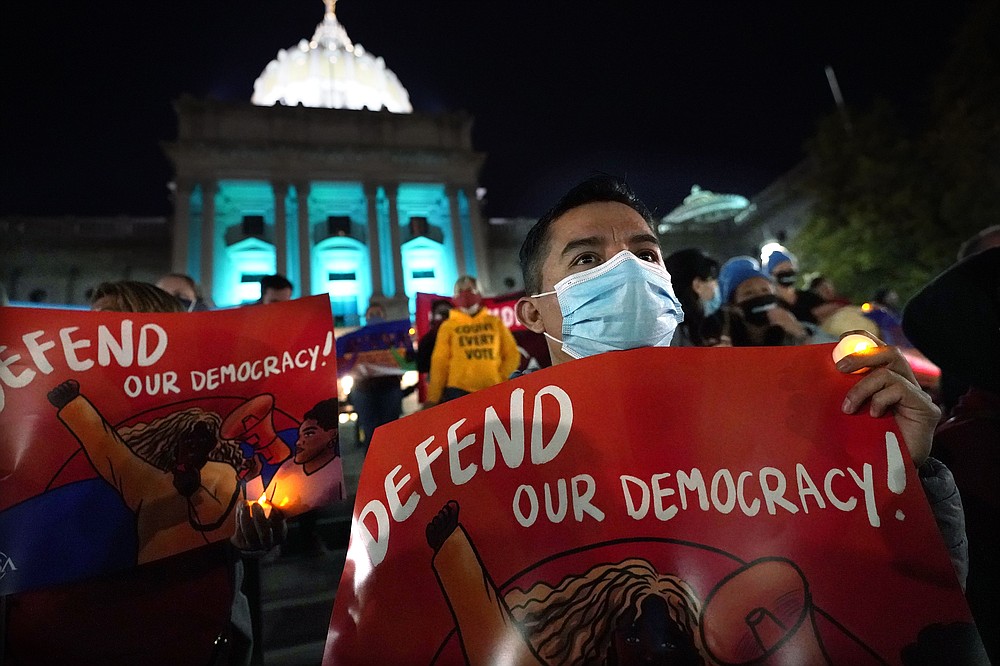 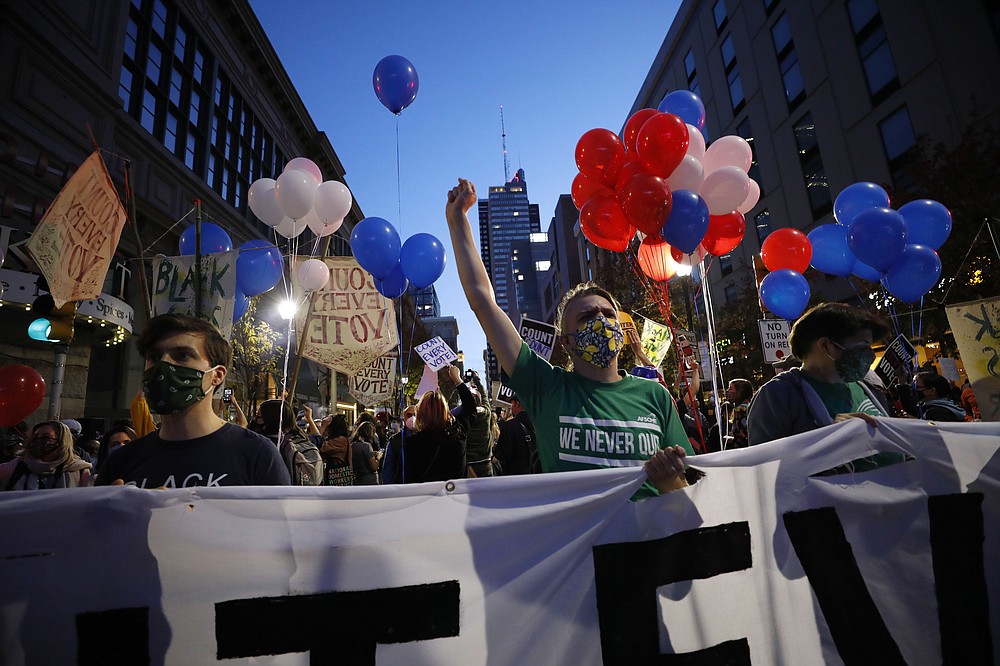 People urging that all votes be counted demonstrate outside the Pennsylvania Convention Center where votes are being counted, Thursday, Nov. 5, 2020, in Philadelphia, following Tuesday's election. (AP Photo/Rebecca Blackwell) 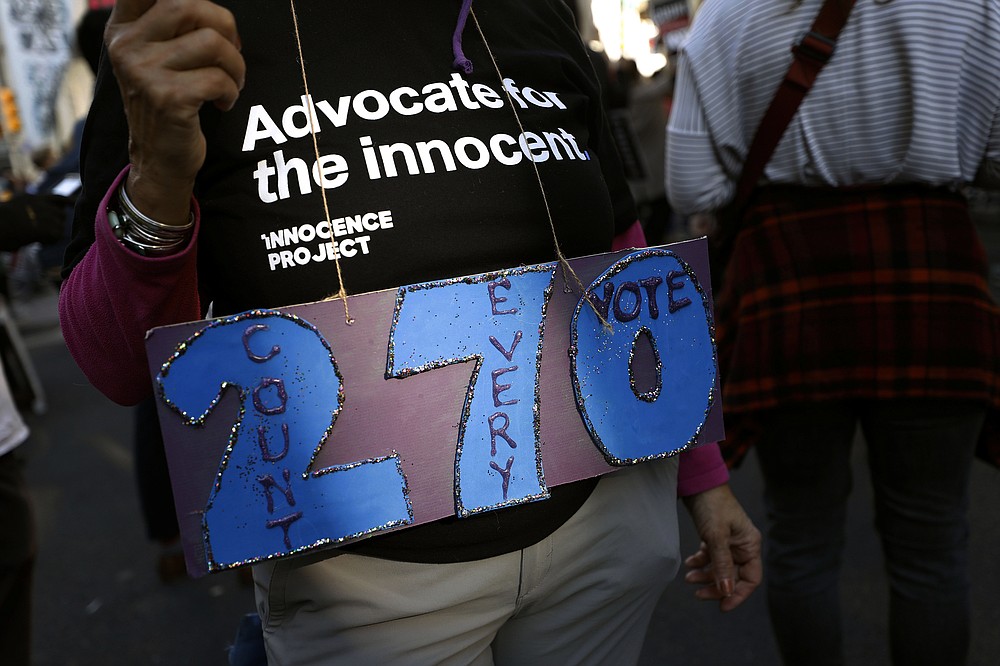 A person holds a sign referring to the number of electoral votes needed to win the presidency while demonstrating outside the Pennsylvania Convention Center where votes are being counted, Thursday, Nov. 5, 2020, in Philadelphia, following Tuesday's election. (AP Photo/Rebecca Blackwell) 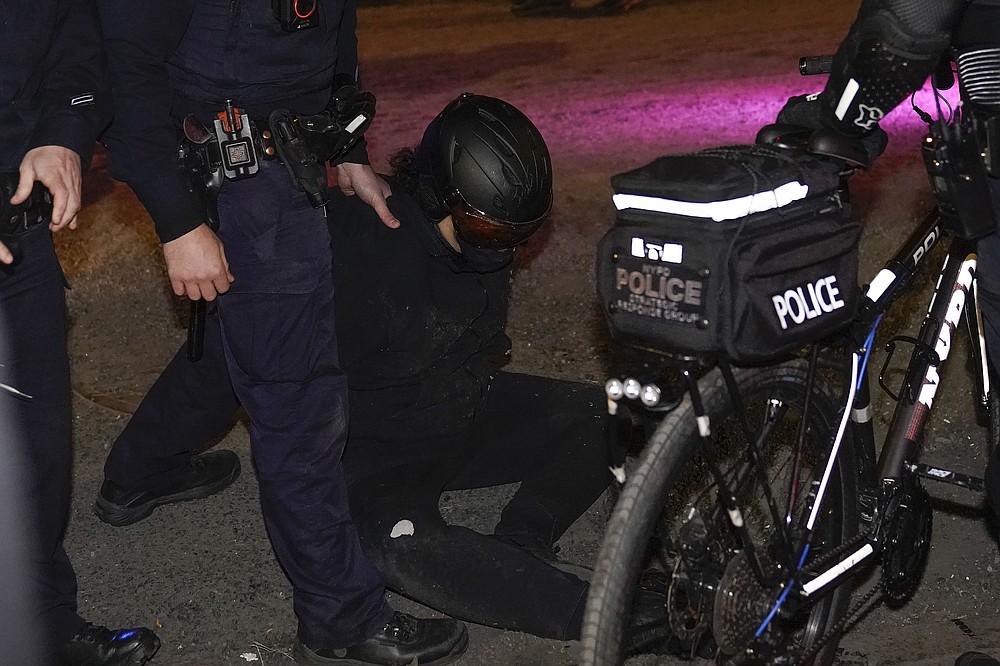 A demonstrator sits on the pavement after having been arrested by NYPD officers during a march through the West Village, Thursday, Nov. 5, 2020, in New York. (AP Photo/Seth Wenig)
ADVERTISEMENT