'The Night of the Iguana' 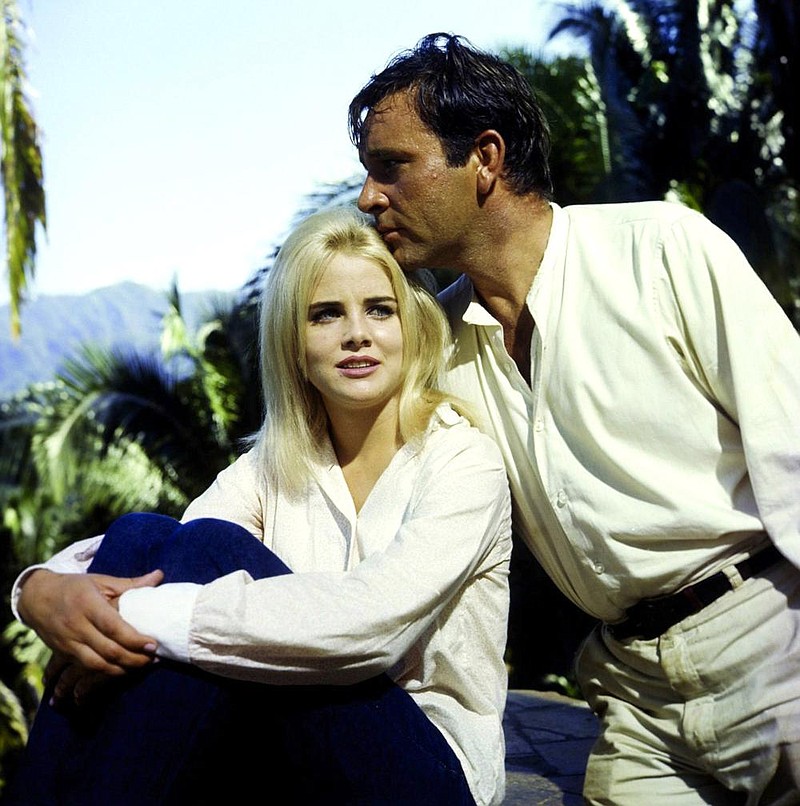 Tennessee Williams' tale of a disgraced and defrocked Episcopal minister slowly going down the rabbit hole made for a fascinating story. And the film of his play was way ahead of its time in 1964.

"The Night of the Iguana," directed by the master John Huston, offers us three main characters, all of whom are going through a rough patch in their lives. The Rev. Dr. T. Lawrence Shannon (Richard Burton), Maxine Faulk (Ava Gardner) and Hannah Jelkes (Deborah Kerr) end up in a run-down Mexican resort hotel atop a hill overlooking the Pacific Ocean, near Puerto Vallarta. Oh, and a busload of female Baptist college teachers, which includes the nubile and "promiscuous Jezebel" Charlotte Goodall (Sue Lyon) and her possibly lesbian chaperone Aunt Judith Fellowes (Grayson Hall).

Faulk is the recently widowed proprietor of said resort and an old friend of Shannon's. He now works as a tour guide for Blake's Tours, a shabby, second-rate enterprise. ("There's nothing lower than Blake's Tours!" he tells Maxine at one point.) On the doomed trip down from Texas, Shannon is caught with Charlotte in a compromising position at a sleazy hotel. And Miss Fellowes is ready to have him fired. So, Shannon commandeers the busload of women (and its driver, Hank (James 'Skip' Ward) from their "air-conditioned, modern hotel" to Mismaloya, named for the small fishing village where Faulk's hotel is located. Shannon takes the distributor cap from the bus' engine to keep them there. That way Miss Fellowes won't be able to contact her brother the judge, "and Lizzie Borden won't be able to wield her axe," he tells Maxine. You see, Shannon assumes there is no phone service at Mismaloya. He is wrong.

Two more characters arrive shortly after the women take the long trek up the hill to the hotel. Miss Jelkes, accompanied by her grandfather, Jonathan 'Nonno' Coffin (Cyril Delevanti), the world's oldest practicing poet, have come from the town to work for free lodgings, as they are destitute. Maxine says they can stay one night. Miss Jelkes tells her that Nonno is working on a new poem. (He hasn't written one in many years.)

As the ladies settle in at Mismaloya, Miss Fellowes keeps trying to call her brother but can't get through as Maxine keeps canceling the call. But sooner or later ...

Miss Jelkes is a quick-sketch artist and her grandfather gives recitations. They have traveled the world but both are ready to stop. Without money for even one night's lodgings she tries to make herself useful to Maxine, who says "You're a hustler." Miss Jelkes tells her she will be glad to go back into town and set up her easel for the tourist trade if that is what Maxine wants. The two settle their differences quickly and start a conversation I didn't quite understand when I first saw this as a youth. The hotel chef, Chang (C.G. Kim), says he is on vacation and puffs on what I thought was a cigarette. And Maxine grabs it out of his mouth and says "I don't want you smoking that stuff even if you are on vacation." (He has let the soup burn.)

Miss Jelkes offers to help cook. As they talk, Maxine tells her that Fred, the late husband, wasn't interested in her anymore, in the biblical sense, so she started messing around with her two beach boys, who work at the hotel. "Old Fred didn't care. He just kept on fishing. ... I still have my biological urges."

"Yeah, but even I know the difference between loving someone and just going to bed with them. Even I know that." I have a feeling the script was cleaned up for the censors in 1964.

Charlotte keeps trying to seduce Shannon but he is just about at the end of his rope. He rebuffs her and she sets her sights on Hank, the only other available male in the group. Eventually, the group gains their freedom and off they go to Puerto Vallarta. And that's when Shannon loses it.

In the film's pivotal scene, Shannon decides "to take the long swim to China," meaning he plans to drown himself in the ocean. Maxine sends the beach boys after him and they tie him up in a hammock on the hotel's veranda. The other "hostage" on the veranda is an iguana that they caught earlier for the next day's dinner.

Shannon thrashes and screams, but then Miss Jelkes and Maxine make him drink some "poppy seed tea" to calm him down.

"Untie me!," he screams, "I'm panicking." Miss Jelkes says she knows. He says a man can die of panicking. "Not when he enjoys it as much as you do, Dr. Shannon."

Shannon finally calms down and Miss Jelkes unties him. He looks down at the iguana. cuts its rope and sets it free. He says the iguana couldn't do it for itself "and God isn't here to do it."

Nonno bursts forth from his room and says he has finished his poem. Miss Jelkes writes down his words:

How calmly does the olive branch

Observe the sky begin to blanch

Without a cry, without a prayer

With no betrayal of despair ...

He gets to the end and asks if she has gotten it all. She says yes and tells him how wonderful it is. "I need to pray now," he says. She says to herself out loud "Oh God, please can we stop now?"

The three main female leads (Gardner, Kerr and Hall) help make this the classic it has become. Burton is also terrific as a man who is about "to take the long swim to China." But it is the at-times eloquent yet accessible script (by Williams, Huston and Kerr's husband, Anthony Veiller) about human frailty and what Shannon calls "man's inhumanity to God" that puts this one over. The final scene with Shannon tied up in a hammock is the raison d'être.

The making of the film is just as interesting as the film itself, if not more so. The Kennedy assassination occurred before the shooting ended but Huston decided that working was better than ruminating and mourning their loss -- and the cast agreed.

Burton was separated from his first wife Sybil, but carrying on with Elizabeth Taylor, who accompanied him to the shoot. She was still married to Eddie Fisher. She was also there in case Gardner couldn't cut it so she could step into the role. Also, Lyons' then-boyfriend was banned from the shoot after he had one too many run-ins with Huston. At one point most of the cast and crew were sick with dysentery. And the whole group had to be shipped in to the set daily on small boats as there was no road yet to connect it to the nearby village.

One positive (or negative) from all this was the worldwide publicity of the Taylor/Burton affair, which brought throngs of media to the area, making it the tourist destination it is now.

Available for streaming for rental or purchase via other digital platforms including Amazon Prime.