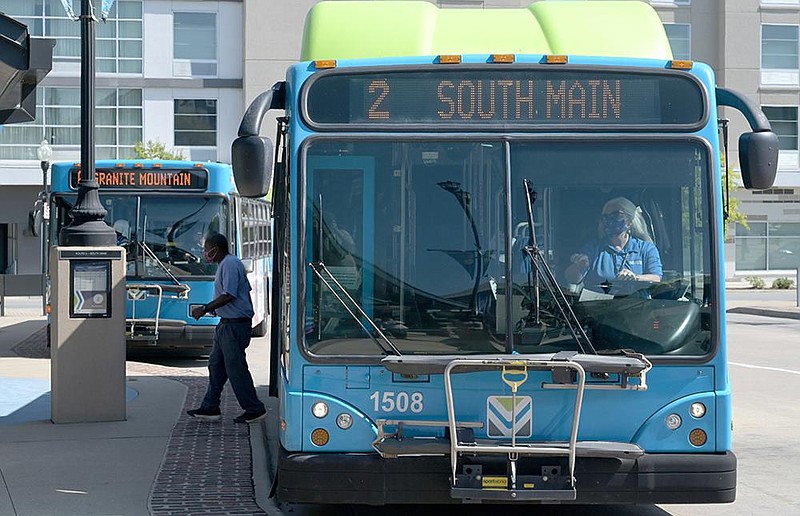 The amount of money Little Rock, North Little Rock and Pulaski County collectively will contribute to support Rock Region Metro's operations will be 5.5% less than they contributed this year under the transit agency's proposed $20.9 million operating budget for 2021.

Rock Region officials said the smaller funding request is an acknowledgment of the coronavirus pandemic's impact on local government budgets, but they warned that they are covering the agency's higher costs next year with $2.2 million from its federal Coronavirus Aid, Relief, and Economic Security Act money that won't be available in future years.

The CARES Act is a $2.2 trillion economic stimulus measure passed by Congress and signed into law by President Donald Trump on March 27 in response to the economic fallout of the covid-19 pandemic in the United States. Rock Region received about $14 million in CARES Act funding.

"The pandemic has affected our funding partners, and we have allocated CARES Act funding to cover increased costs in the operating budget, while being mindful that we are still experiencing extra funding needs related to the pandemic and do not know when it will end and must keep funds in reserve to better navigate future unknowns," said Becca Green, the agency's spokeswoman.

"At a budget committee meeting earlier in the week, it was noted that the gap between the transit agency's request and what it actually needs is 'something the funder partners must plan for in future years for public transit service," she added.

The Rock Region board of directors will take up the proposed budget at its regular monthly meeting on Nov. 17. The three funding partners also must separately approve their contributions as part of their 2021 budgets.

The transit agency needs the municipal and county subsidies because it doesn't collect enough in fares to cover its operating costs and doesn't have an independent source of revenue, such as a countywide sales tax.

Ridership has fallen because of the state-imposed restrictive protocols on gatherings of more than 10 people, which limits the number of people Rock Region's regular buses can carry.

North Little Rock will pay about $3 million, or more than 6% less than this year. Pulaski County's share drops nearly 14% to slightly below $1.2 million.

Together their contributions will be $674,000 less than what they are paying this year, according to the budget documents.

Sherwood and Maumelle were dropped as funding partners in 2021 after system service cuts eliminated express routes serving those cities.

The cuts were part of a systemwide overhaul that concentrates service on high-demand routes, expands into previously high-volume corridors and institutes micro-transit zones in areas where demand is less robust.

Charles Frazier, Rock Region's executive director, has said he will negotiate new service with Sherwood, Maumelle and Jacksonville, and also with Conway.

The budget contemplates drawing down $2,283,618 of CARES Act funding to cover not only projected loss of fare revenue but increased janitorial expenses, as well as additional shop and clerical supplies, including masks and hand sanitizer because of the pandemic.

The transit agency expects to pay an additional $200,000 next year in custodial services because of the additional "deep cleaning" of its facilities and vehicles.

Labor costs account for more than $9.9 million in the proposed budget, an amount that is 5.5% higher than this year and is the single largest line item.

Major capital projects for 2021 include the acquisition of eight compressed natural gas buses for $4 million.

The acquisition is part of a long program to replace Rock Region's diesel fleet with buses that rely on cleaner-burning compressed natural gas, or CNG.

"This is on track for meeting our goal to convert the entire diesel bus fleet to a CNG fleet by the end of 2025," Green said.