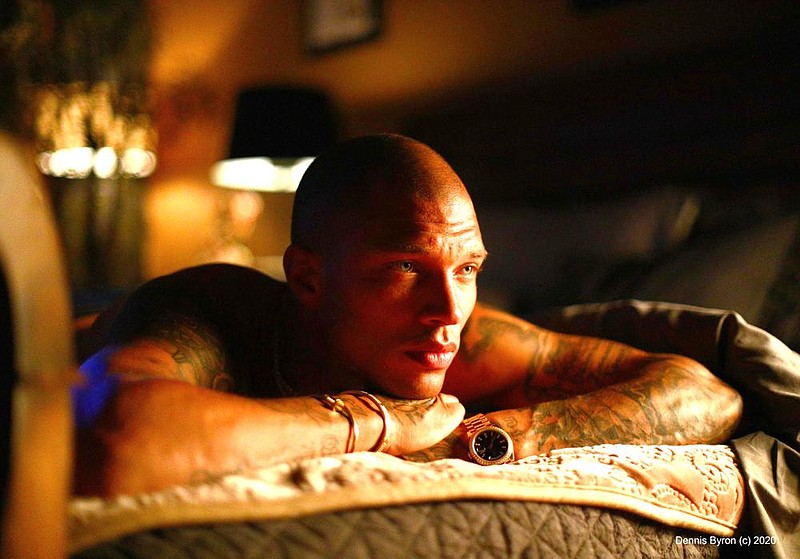 Jeremy Meeks, who achieved internet fame after his sexy mugshot was posted on the Facebook page of the Stockton (California) Police Department, plays a hitman named Saleem in “True to the Game 2.”

I haven't had the chance to catch Preston A. Whitmore II's "True to the Game," so I'm at a little disadvantage to cover its sequel "True to the Game 2: Gena's Story." On its own, the second installment, helmed by Jamal Hill, offers the jolts that one might expect from a schoolyard bully instead of fearsome made men.

The one intriguing aspect of the film is that the gangsters in the film are white collar, Black women from Philadelphia. If you spent any work hours with Gena Rollins (Erica Peeples), you'd probably think that she's a dedicated worker bee, and for all the work she does, you'd be right.

Gena's lifestyle doesn't match up with her journalist day job. It's obvious she's doing something on the side to afford her lifestyle. She also wants revenge for the death of her beloved fiancé Quadir (Columbus Short), who was murdered in the first film.

When she isn't putting in 16-hour days, however, she steals dope for other gangsters. Many of these criminals are easy for an attractive woman to distract.

That said, even these guys resent having their narcotics and cash stolen, and they aren't stupid enough to ignore that their own girlfriends might be the thieves.

The setup has a lot of promise. After all, "Breaking Bad" did a great job of exploring how college educated technocrats could use break the rules to keep up their prosperous facades. "Set It Off" proved that women could easily carry a caper film, but not much happens once the ladies in this film get their contraband.

What prevents tension from building is that the characters are thin and that the most interesting visuals are those of masks Gena and her cohorts wear on a heist. Their spiny masks could be very useful to prevent covid-19 by both containing airborne pathogens and by strictly enforcing social distancing.

Because the characters aren't terribly dynamic, it's hard to care if Gena and her crew make off with the loot and keep it. The actors seem bored with the all the exposition they deliver. Jeremy Meeks is appropriately intimidating as a hitman named Saleem, but a lot of the story is flat and uneventful.

The dialogue by screenwriter Whitmore is not that scintillating. Gena muses, "Life has a way of sometimes getting in the way of your intentions."

When Saleem reveals that women pulled off the robbery, his girlfriend, Bria (Iyana Halley), who is Gena's cousin asks, "B*tches, like girls?"

He not so wittily replies, "Is there any other kind?"

There are some opulent coastal settings. Curiously, the fight choreography is pretty wimpy for a gangster film, and there isn't much suspense if the outcome is more predictable than last Tuesday's election.

It is a pleasure to hear Faith Evans perform "Amazing Grace" with all she's got. It would have been more fun if the film didn't feature characters remarking about the fact that she's singing it when her own voice speaks eloquently for itself.

There's room for yet another installment, but I think I'd rather hear more of Ms. Evans' singing.