Claiming the fullness of faith: Halley says Gospel is best hope for healing 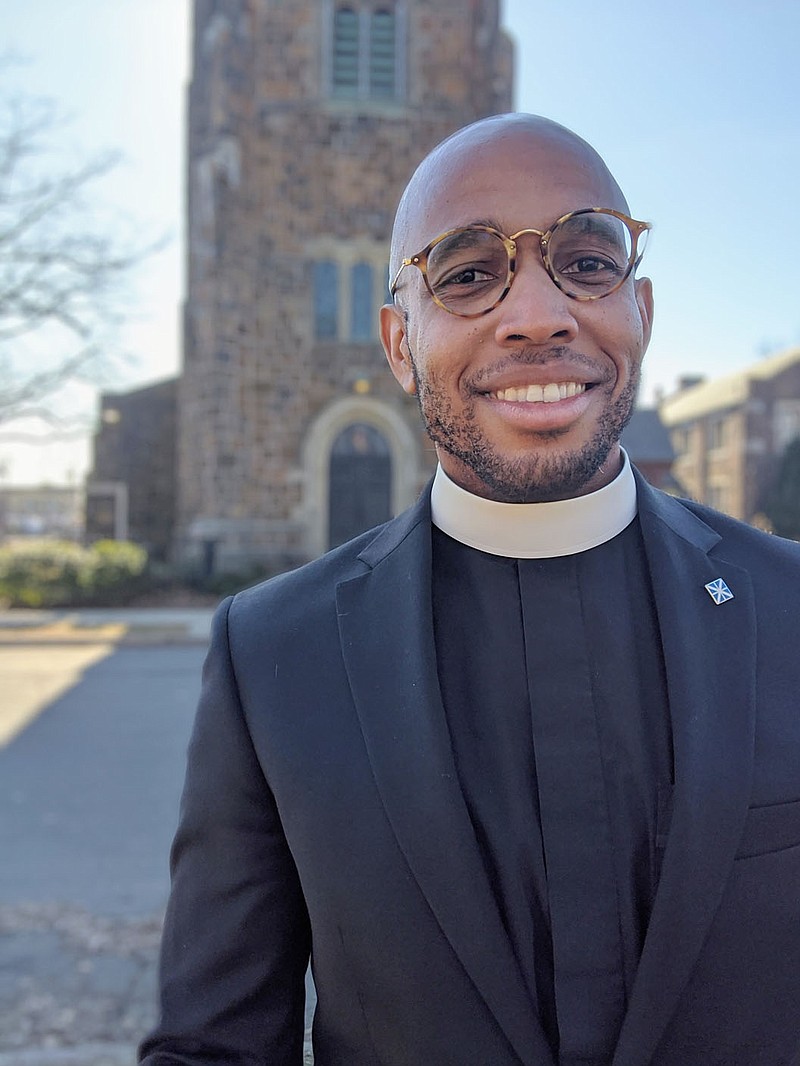 The Rev. Marcus Halley, speaking this weekend at St. Paul’s Episcopal Church via Zoom, says he hopes “that folks take away this: Jesus lives! And because he does, everything is different. I hope that I share something that inspires someone to deeper service, love, or devotion to God. I hope that folks go away believing a little more deeply that God has not given up on us, even though we seem to try our best to run God off.” (Courtesy photo)

The Rev. Marcus G. Halley's website describes him as "a theologically orthodox, ecclesiologically catholic, liberation-minded, socially and politically conscious, high-church Episcopal priest born in the North, raised in the South, residing and presiding in the upper-Midwest, and praying like its 1549."

Halley, who will speak twice this weekend at St. Paul's Episcopal Church in Fayetteville via Zoom, elaborates on that description.

"What's really interesting is that I've begun the process of dismantling that website and making room for what God is inviting me into next," he says via email. "That said, there is so much about this statement of self-identification that I still resonate with. When I refer to myself as 'theologically orthodox,' I mean to stake my claim to the Christian faith at its heart. So much of Christian history has pushed marginalized people aside. Our ideas, our experiences, our perspectives are labeled as some sort of specialized theology while our colleagues from dominant cultural groups get to just do 'theology.' As a theologically orthodox Christian, I claim the fullness of the Christian witness -- from the revelation of the Triune God to the belief in the return of Christ -- and I believe this witness is liberating at its heart.

"My understanding of the church is catholic in that I believe we are incredibly connected to our Christian siblings from across the world and across time," he goes on. "I am liberation-minded because to be anything else would be to surrender to all the dehumanizing forces in our world who work to undermine my sense of who God made me to be. I am socially and politically conscious in the sense that I understand that the Gospel didn't come down from heaven in a hermetically sealed container. Rather, the Gospel was incarnate in brown, poor, colonized, Jewish flesh in Palestine, a crucified body that would be tortured as a political rebel, and a resurrected body that would be referred to using Caesar's title -- 'King of Kings' and 'Lord of Lords.' That matters. I am, by training, a Sewanee High Churchman which means that I am drawn to the ritual of the book of Common Prayer and want to practice it in such a way that its sheer beauty speaks a message of hope. The only thing I'd add to this is that I am now 'residing, presiding, and forming leaders in New England, and praying like its 1549' (the year the first Book of Common Prayer was published)."

Halley's current title within the church is "dean of formation." To explain that, he says, "my job description places me in the role of working collaboratively with the Commission on Ministry of the Episcopal Church in Connecticut to recruit, train and support new clergy for our diocese. Your question begs another question: What am I in charge of forming? The answer for me is clear: disciples. While my passion for ministry lies in supporting leaders generally, I am incredibly drawn to the formation of the laity as the primary ministry of the Gospel. Often when people use the word 'education,' they frame Christian faith as something we do primarily with our heads. Formation is a more wholistic term. Christianity is something we do with our full selves. Jesus reminds his disciples that the first 'great commandment' is to 'love the Lord your God with all heart, with all your soul, and with all your strength.' One of the eucharistic prayers we have in our prayer book says that we offer God 'ourselves, our souls, and bodies.' The Episcopal Church is really good at telling people that we don't leave our minds in the glove compartment when we come to church. Formation reminds that we don't leave anything else there either."

Halley's book, "Proclaim!," is described as "an exploration of Episcopal liturgy from a black, queer, millennial perspective, with an eye toward proclamation and justice." Halley is clearly Black, but what about the rest?

"I grew up in a Black Baptist Church in the American South, a Christian tradition that was formed because White Christians baptized my ancestors and then told them their baptism didn't make them equal members of the Kingdom of God. I grew up in a church where to be anything other than cis-gender and straight was to be deviant and an abomination. I serve a church that is struggling to engage, reach and retain people my age and younger. What my identity has shown me is that God is not relegated to any one church or institution. The Gospel is like water. You can overlook it if you want, but water will find a way to reach its destination. Just ask the Grand Canyon. Or the Mississippi River. Or the Lower Ninth Ward. Just like that, God's message will find a way to reach those God is calling into service. The elders in my childhood church use to sing, 'Jesus will pick you up, if he has to reach way down.' My experience as a black, queer, millennial Christian has shown me that the mission of God is happening in the world whether or not the church signs up to participate."

"Part memoir, part history, part biblical studies, and part practical theology, 'Proclaim!' suggests that the politics of our liturgical tradition is the ground from which we can engage in the justice work that our world needs," a description of Halley's book says. He adds to that.

"The best way to elaborate is to share a story. The most moving experience of the eucharist I can remember took place at Church of the Common Ground, a ministry to and with the homeless community in Atlanta. One Sunday, I remember sitting on a concrete planter in the park while the vicar said the eucharistic prayer. This happened right after she had just been verbally accosted by a passerby who was clearly upset that she was a priest ... and a woman. As she said these prayers, there were police sirens whizzing by because a fight had broken out across the street. We were gathered in that park, under the canopy of trees, as a diverse community of brown, black and white; rich and poor; queer and straight; addicted and sober. We Episcopalians love our liturgical tradition -- and it is beautiful -- but the beauty we see in it isn't meant to be bottled up and put on a shelf. The beauty we experience is meant to train us to see beauty elsewhere."

Asked how we as a nation repair the hatred and division and strife that surrounds us, Halley says "I think the Gospel is our best hope, and not in the lets-have-a-revival-and-save-some-souls kind of way."

"I think this is an opportune time for Christians to really assess who they have given their lives to and what that requires of us. When I read my Bible, I see that the Bible tells me to love my enemies, to fight for justice and to forgive those who harm me, to worship God and to dismantle systems the exploit the poor (Jesus did flip over some tables), to give away power, not use it to abuse others. We won't ever completely dismantle these systems that keep us locked in combat with one another, but it is still our work to try. In moments like these, I am reminded of the excerpt from the Talmud: 'You are not obligated to complete the work, but neither are you free to desist from it.'"

When: “The Way of Jesus as Spiritual Practice,” 7 p.m. today; and “Living Eucharistically,” 10 a.m. Sunday

Where: St. Paul’s Episcopal Church in Fayetteville via Zoom and YouTube

FYI: The lecture is part of the McMichael Lecture Series at St. Paul’s.