But earnings down 11% at rival Japanese automaker Toyota by YURI KAGEYAMA THE ASSOCIATED PRESS | November 7, 2020 at 1:54 a.m. 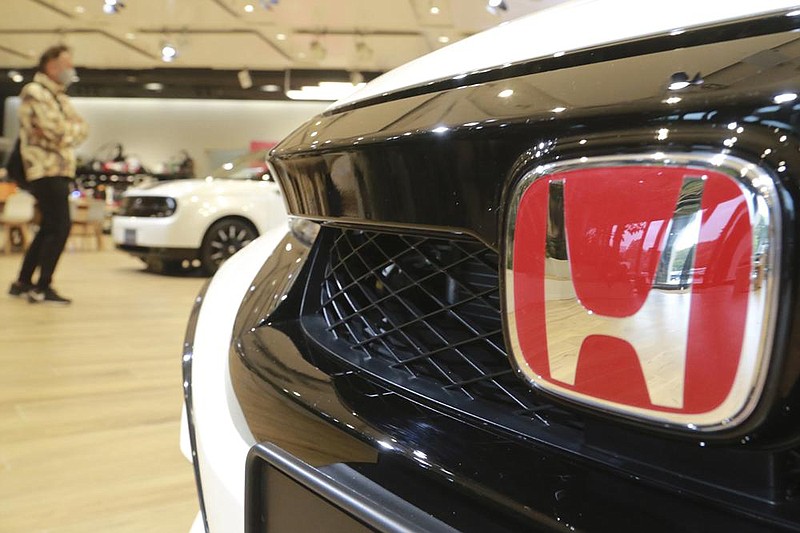 A visitor checks out a vehicle earlier this week at a Honda Motor Co. showroom in Tokyo. (AP/Koji Sasahara)

TOKYO -- Japanese automaker Honda reported Friday that its profit rose more than 20% in the third quarter, despite a pandemic that has slammed businesses around the world.

Also Friday, Honda rival Toyota reported its July-September profit fell more than 11% from a year earlier, but Japan's top automaker appeared to be holding up better than weaker rivals that have sunk into the red.

Tokyo-based Honda Motor Co. said its third quarter profit was $2.3 billion, up from $1.9 billion a year earlier, as the auto market recovered in some parts of the world.

Honda said it carried out aggressive cost cuts that involved a "fundamental review" of its operations. The situation was also improving from earlier this year, when lockdowns and other problems related to covid-19 caused disruptions of some production and an inventory crunch.

Quarterly sales slipped to $35 billion from $36 billion the same period a year earlier.

Honda, which makes the Accord sedan and Asimo robot, warned that uncertainty remains amid rising covid-19 cases. But the company stressed it was managing to cling to profitability.

Reflecting that upbeat mood, Honda raised its profit forecast for the fiscal year through March 2021 to $3.8 billion from an earlier projection for $1.6 billion.

The latest forecast is still lower than the $4.4 billion profit Honda booked in the previous fiscal year.

But it sold fewer motorcycles at nearly 4.5 million, down from nearly 5.1 million.

Kohei Takeuchi, a senior Honda manager, said much of the damage to sales likely came from the pandemic, though he hesitated to blame the entire decline on the outbreak.

Executive Vice President Seiji Kuraishi told reporters Honda is bullish on shifting its lineup to ecological models to keep up with the global efforts to curb carbon emissions and global warming.

Toyota Motor Corp. raised its full year fiscal forecasts to a $13.5 billion profit, after reporting results that appear to show a gradual but sure recovery.

The company reported a quarterly profit of $4.5 billion, down from $5.1 billion a year ago. Quarterly sales slipped to $65 billion from $74 billion.

"Toyota has become gradually stronger," he said, offering gratitude and praise for how resilient Toyota has proven itself to be.

"This shows how each individual worked so hard," said Toyoda, the grandson of the automaker's founder, vowing that each of its employees will keep thinking about contributing to a better world.

Toyota, based in Aichi, central Japan, said it expects to record a $13.5 billion profit for the fiscal year. It earlier projected $7 billion in profit.

Toyota's operating income fell in most regions, including Japan and other Asian markets, but improved in North America. Operating Officer Kenta Kon expressed caution about the U.S. outlook, given the rising coronavirus cases. But he said Toyota's latest models were popular, and dealers were adjusting incentives to get good results.

All the world's automakers have been slammed by shrinking demand as covid-19 squelches economic activity. Some nations, including Japan, have sunk into recession.

Although uncertainties persist about further outbreaks and when a vaccine might be available, there are signs of recovery in some parts of the world. Japan has managed to keep pandemic-related deaths at fewer than 2,000. It has reported about 105,000 cases nationwide.