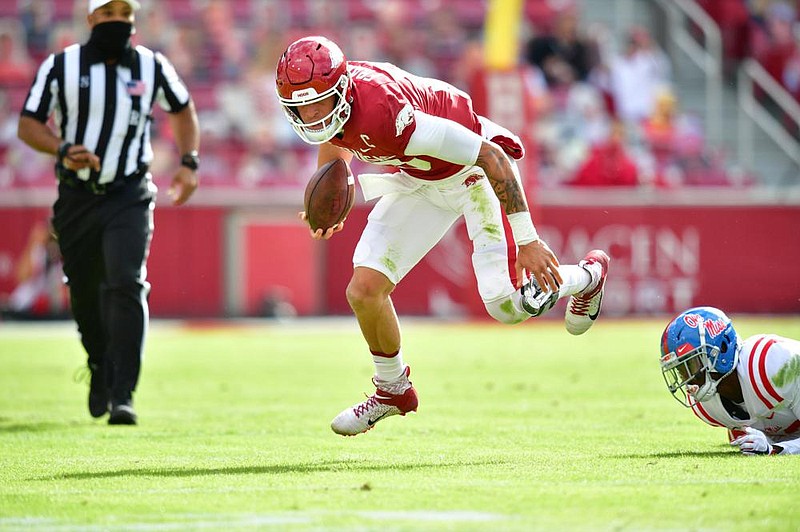 Senior quarterback Feleipe Franks leads Arkansas against Tennessee tonight at Reynolds Razorback Stadium in Fayetteville. The Razorbacks and Volunteers have not played in Fayetteville since 2011, and Arkansas has won the past two games in the series. (University of Arkansas/Walt Beazley)

FAYETTEVILLE -- The football annals between the University of Arkansas and Tennessee are relatively thin from a big picture standpoint.

But the programs from opposite sides of the SEC meet at 6:30 tonight at Reynolds Razorback Stadium with plenty at stake in both the short and long term.

The winner between the Razorbacks (2-3) and the Volunteers (2-3) gets back to .500 and claims a leg up in the bowl pecking order during this coronavirus-affected season.

Could it be that Year 1 of the Sam Pittman era at Arkansas has seen more advancements than Tennessee in a third season under Jeremy Pruitt, who clearly owns a recruiting edge over the Razorbacks to this point?

The Volunteers are a one-point favorite tonight, and Pittman thinks beating the Volunteers will be a tough task.

"This is a really good football team that looks like an SEC football team," Pittman said. "And Coach Pruitt and those guys have done an outstanding job of getting them to this point. You know early in the year they were on an eight-game winning streak counting six from last year.

Tennessee has lost three in a row after opening with wins over South Carolina and Missouri.

Pruitt was thought to have been turning the corner with a hot finish to last season, but the three-game skid has renewed the pressure for Pruitt in Knoxville.

The Volunteers had an open date last week to refresh, get back to fundamentals and put in a plan for the Razorbacks, who have been one of the surprise teams in the SEC.

"I think he's doing a really, really good job," Pruitt said of Pittman. "You can see it. His team's playing hard and playing together.

"There's lot of really good football players on the team. I feel like on each side of the ball there's six or seven guys that ... have a chance to be All-SEC type of players. The guys are playing hard, they're playing with confidence and playing together."

Arkansas struggled worse than any SEC team over the last three years, but the Razorbacks entered the season with a winning streak against the Volunteers.

Arkansas has won the past two games in the series, a 49-7 rout here in 2011 highlighted by Joe Adams' incredible 60-yard punt return touchdown, and a 24-20 road upset in 2015 at Neyland Stadium. Tennessee and Florida were the only SEC teams the Razorbacks had beaten in their previous meetings entering this season.

The Razorbacks already have broken long losing streaks this season -- a 20-game skid vs. SEC competition and a 12-game streak in conference home games -- but they have others in their sights.

Arkansas can snap its seven-game losing streak against SEC East competition with a win tonight. The Razorbacks' last win over an Eastern Division opponent came in a 31-10 rout of No. 11 Florida late in the 2016 season. Since then, the Hogs have lost four in a row to annual cross-division rival Missouri, plus single games against South Carolina, Vanderbilt and Kentucky.

Pittman and his staff have tons of familiarity with Tennessee, Pruitt and offensive coordinator Jim Chaney.

Pittman is longtime friends with Chaney and has worked with him at three schools (Tennessee, Arkansas and Georgia). As the associate head coach at Georgia, Pittman faced the Volunteers the last four seasons.

"Obviously they're in the East," Pittman said. "Georgia's in the East. Mizzou is in the East. We know their roster pretty well. We have much familiarity with their program and their depth."

On the flip side, Pruitt has gone against Razorback teams on many occasions as an assistant coach at Alabama and Georgia, but not in very recent memory.

"Well, it's the first time I've coached against Arkansas since the '16, '17 seasons, and you can really see on their roster the difference in the talent level from '17 until now," Pruitt said. "The last couple of years, they've done a really nice job recruiting some good, young, talented guys in there, so I'm probably not as familiar with their roster in itself.

"There's several guys that's on their team that we recruited at one stop or the other but didn't get them, so we know that they've got some really talented players."

For two programs with a slender history, the Razorbacks and Volunteers have enjoyed some of their biggest wins against each other.

The Razorbacks held a 24-10 lead midway through the third quarter, then had the ball with a chance to almost run out the clock with a 24-22 lead late in the game. Arkansas quarterback Clint Stoerner stumbled over the foot of his own lineman, and his fumble was recovered by the Vols' Billy Ratliff at the Razorbacks' 43 with 1:43 remaining.

Travis Henry ran the ball five consecutive times, the last for a 1-yard touchdown with 28 seconds remaining to give Tennessee a 28-24 win. Without that bizarre comeback, the Volunteers probably do not go on to claim the first Bowl Championship Series national title over Florida State.

The Razorbacks got a small measure of revenge the next season, when Stoerner connected with Anthony Lucas for a 23-yard touchdown pass with 3:44 remaining for the go-ahead score in a 28-24 victory over No. 3 Tennessee.

"What I remember most about that whole game is I think about the year before that in 1998, when we should have beaten Tennessee," Lucas told the Arkansas Democrat-Gazette earlier this year. "So we sit there the entire year just thinking about that game and couldn't wait to get back and play Tennessee again.

"Once we got to that game, it was very, very personal. I was so happy for Clint that we were able to come back and redeem ourselves a year later with the exact same score. It was kind of nice being on the end of that pass from Clint Stoerner to win that football game. But you know it was a team effort, because our defense had to come out and stop them on that last drive, and those guys came out and did a tremendous job. But man I remember it. Every time I envision that catch or I hear it on the radio, man, I still get chills down my spine after all these years."

Another big Arkansas win came in their first visit to Neyland Stadium as a member of the SEC.

The Razorbacks were a huge underdog under interim coach Joe Kines against No. 4 Tennessee on Oct. 10, 1992, but quarterback Barry Lunney Jr. helped engineer a 25-24 upset.

Two programs that emerged as kings of overtime in the early years of the overtime period engaged in a whopper on Oct. 5, 2002.

The No. 11 Razorbacks entertained ESPN's "College GameDay" for the first time on Nov. 11, 2006, and capitalized on the extra attention. Lee Corso donned Razorback headgear to make his pick before the game, and Darren McFadden blew up in the WildHog formation in the night game, rushing for 181 yards and 2 touchdowns and throwing a 12-yard touchdown pass to Marcus Monk in the 31-14 victory. Arkansas won its ninth consecutive game in the midst of a 10-game winning streak that resulted in a SEC West championship.

COACHES Jeremy Pruitt (15-15 in third season at Tennessee and overall); Sam Pittman (2-3 in first season at Arkansas and overall)

Arkansas’ all-time results in its series with Tennessee: