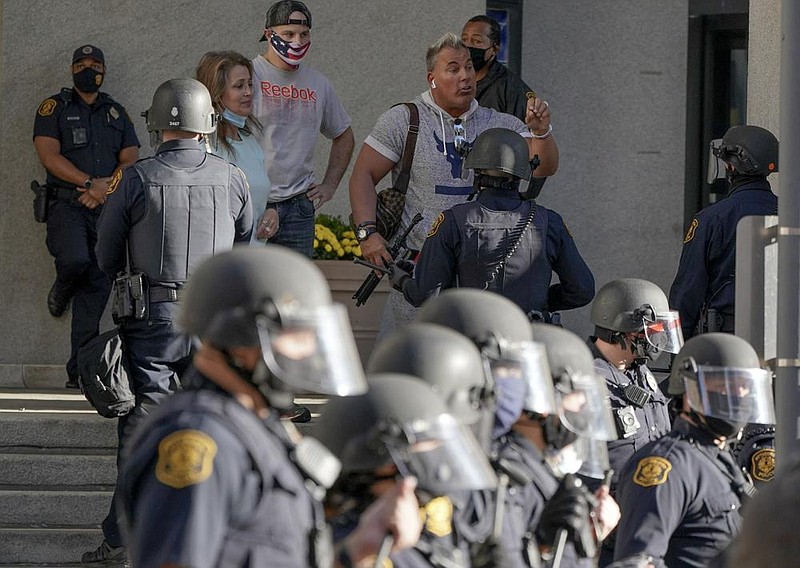 Police in riot gear line up between protest groups Friday outside the City County Building in Pittsburgh. (AP/Gene J. Puskar)

Protesters gathered outside vote-tabulation centers in a few cities around the country Friday to rally against what they see as the Democrats trying to steal the White House.

Elections officials in several states where former Vice President Joe Biden, the Democratic nominee, was ahead said the anger outside their doors made them fear for the safety of their employees, but the protests remained peaceful.

Roughly 100 President Donald Trump supporters gathered for a third-straight day in front of the elections center in Phoenix, where hundreds of workers were processing and counting ballots.

"Arrest the poll workers!" the crowd chanted, demanding four more years in office for Trump. Sheriff's deputies kept protesters in a "free speech" zone away from the entrance to the building.

"When we start auditing some of these voter rolls, their fraud may actually be exposed," conservative activist Charlie Kirk told the crowd, eliciting cheers.

In Detroit, dozens of Trump supporters returned to the streets outside the city's convention center, where election workers counted ballots.

"Stop the steal!" the protesters chanted. Some carried signs that read, "Make Elections Fair Again" and "We Love Trump." Police cordoned off streets leading to the building and maintained a close watch on the protest.

[Video not showing up above? Click here to watch » https://www.youtube.com/watch?v=q_V4Y5OEx_E]

The county treasurer in Detroit, Eric Sabree, said he had closed his office because of threats. In a statement, Sabree said the decision was made "in the interest of the safety of taxpayers and our staff" and because of "credible information" from the sheriff's office.

In Philadelphia, two men with handguns were arrested Thursday night near the convention center where the vote-counting was going on.

Joshua Macias, 42, and Antonio LaMotta, 61, traveled from the Virginia Beach, Va., area in a Hummer and did not have permits to carry the weapons in Pennsylvania, police said.

A military-style rifle and ammunition were found inside their vehicle, Police Commissioner Danielle Outlaw said. The car had a window sticker for the right-wing conspiracy theory QAnon.

District Attorney Larry Krasner did not say why the men had gone to Philadelphia, but said there were no indications they were part of an extremist group.

They were arrested after the FBI in Virginia relayed a tip about their plans to Philadelphia police. Officers stopped the men on the street about a block away from the vehicle, Outlaw said.

A woman with the men was not arrested, Philadelphia District Attorney Larry Krasner said.

"There have been no reported incidents of violence related to the election here this week," Krasner said in a statement.

In Rhode Island, about 100 protesters rallied outside the state board of elections headquarters, demanding a recount in an overwhelmingly Democratic state where Biden won with more than 59% of the vote.

Protesters said ballots were illegally dumped in Rhode Island. State elections officials have said they have no evidence of fraud.

Information for this article was contributed by Suman Naishadham, Astrid Galvan, Claudia Lauer, Mike Householder and Sudhin Thanawala of The Associated Press. 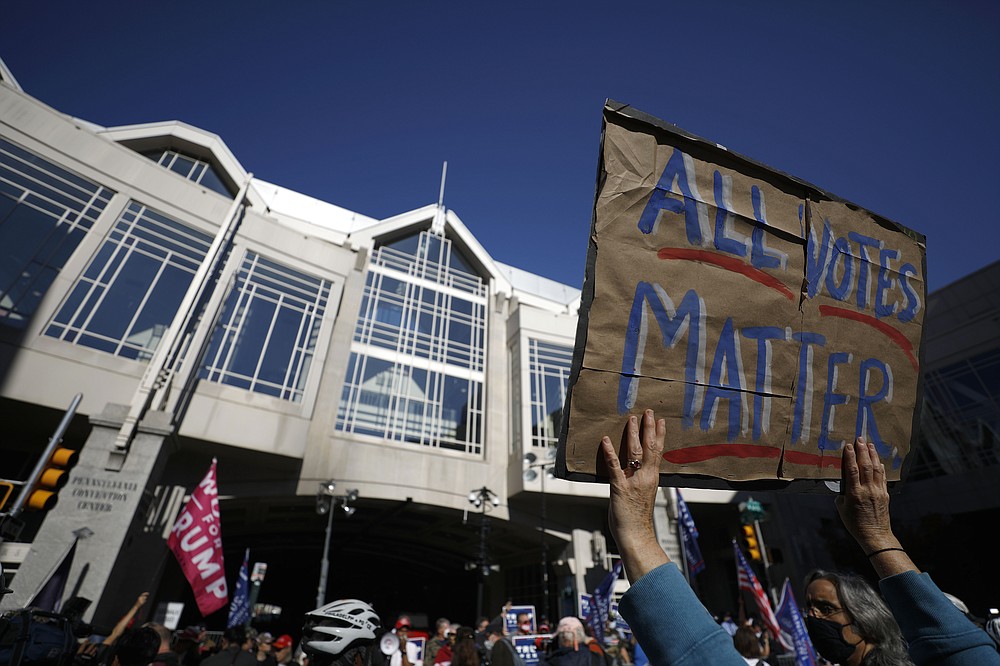 People demonstrate outside the Pennsylvania Convention Center where votes are being counted, Friday, Nov. 6, 2020, in Philadelphia. (AP Photo/Rebecca Blackwell) 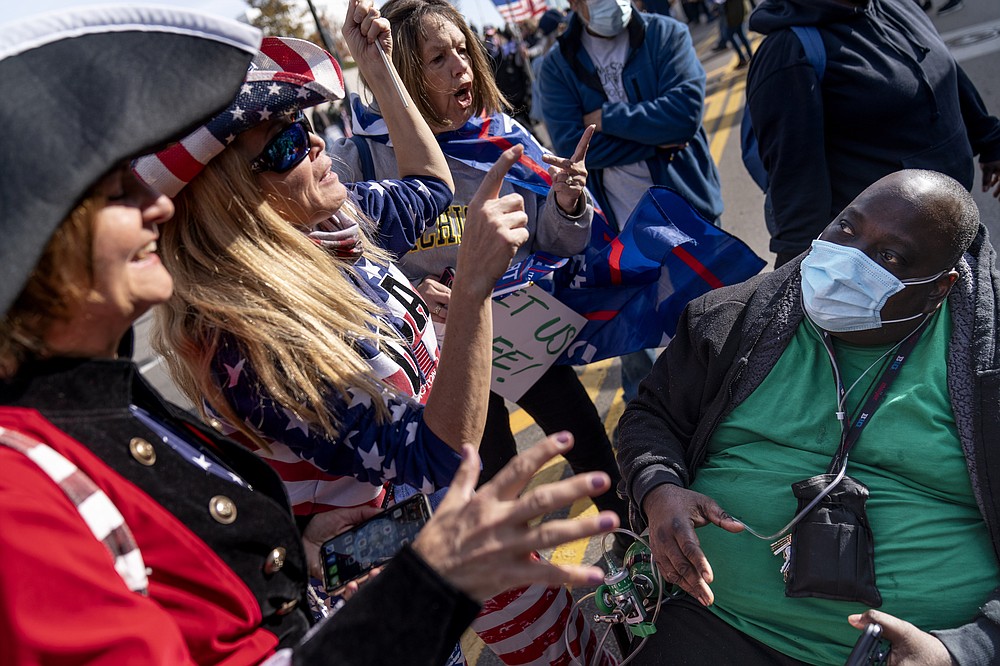 A Biden supporter who would only give his first name, Douglas, right, engages in a debate with Trump supporters demonstrating against the election results outside the central counting board at the TCF Center in Detroit, Friday, Nov. 6, 2020. (AP Photo/David Goldman) 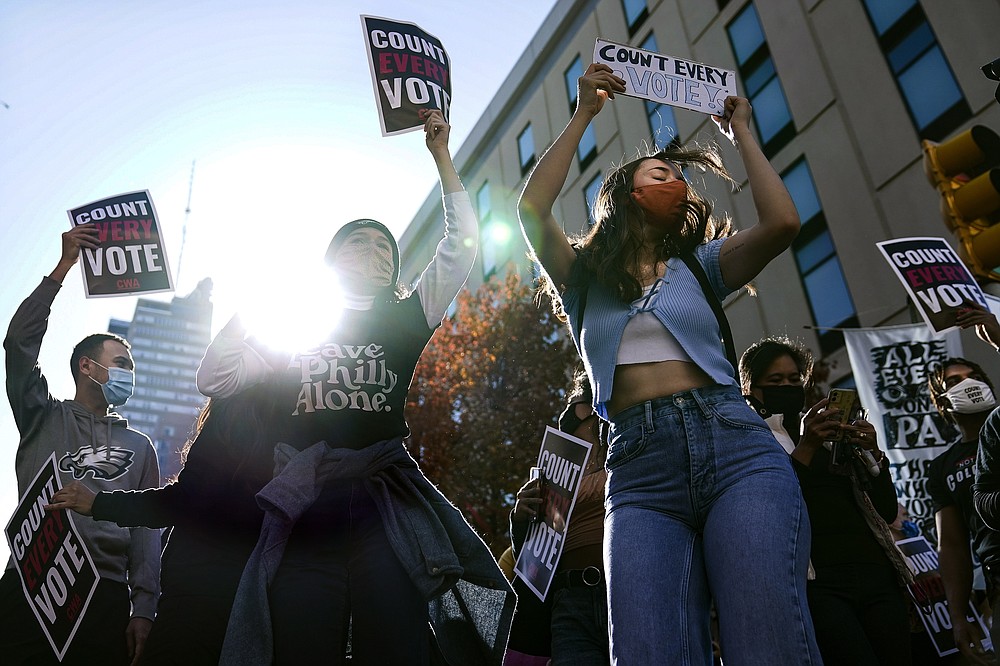 Demonstrators urging all votes be counted gather outside the Pennsylvania Convention Center where votes are being counted, Friday, Nov. 6, 2020, in Philadelphia. (AP Photo/John Minchillo) 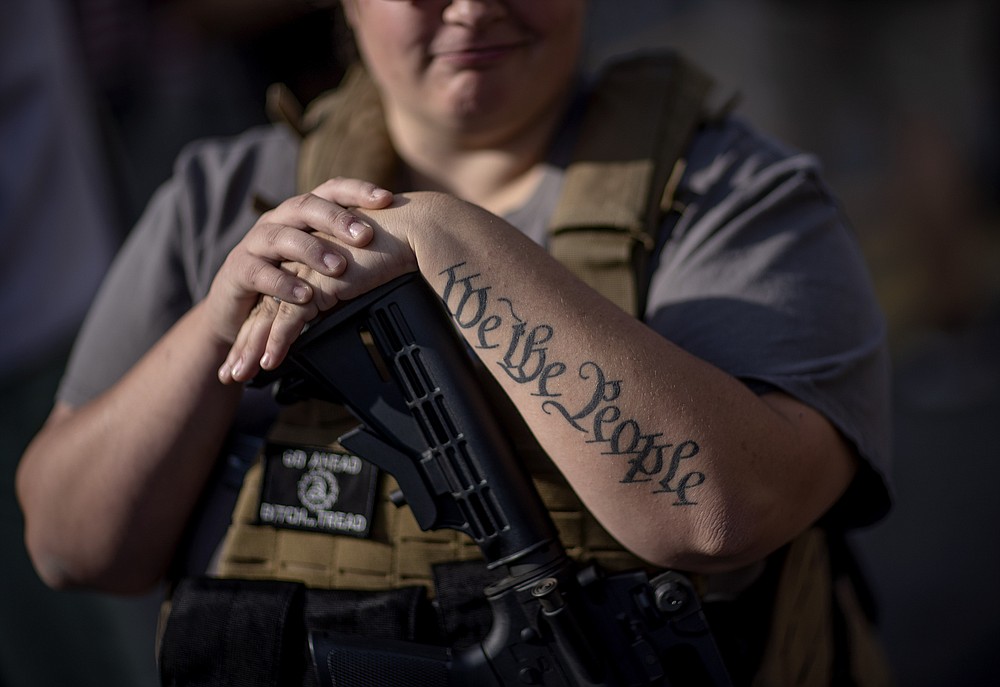 The tattoo "We The People", a phrase from the United States Constitution, decorates the arm of Trump supporter Michelle Gregoire as she rests her hand on her gun during a protest over the election results outside the central counting board at the TFC Center in Detroit, Friday, Nov. 6, 2020. (AP Photo/David Goldman) 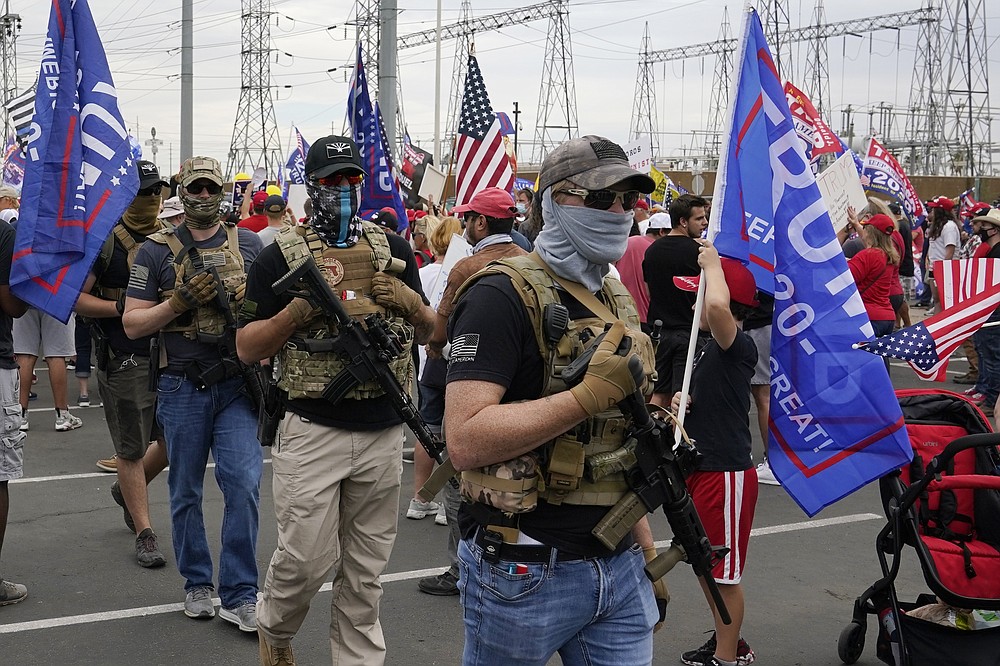 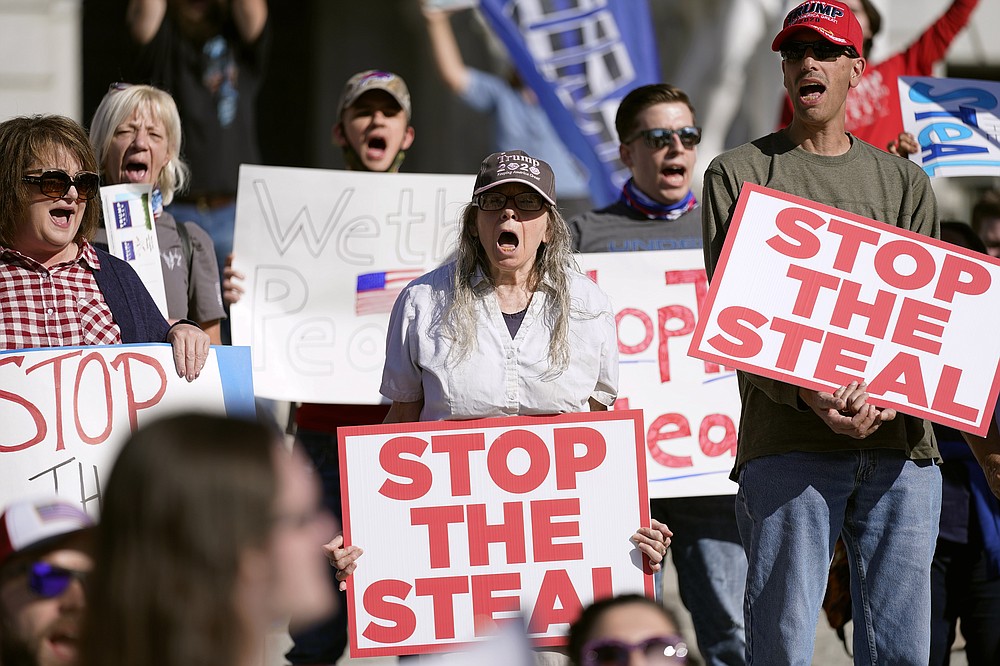 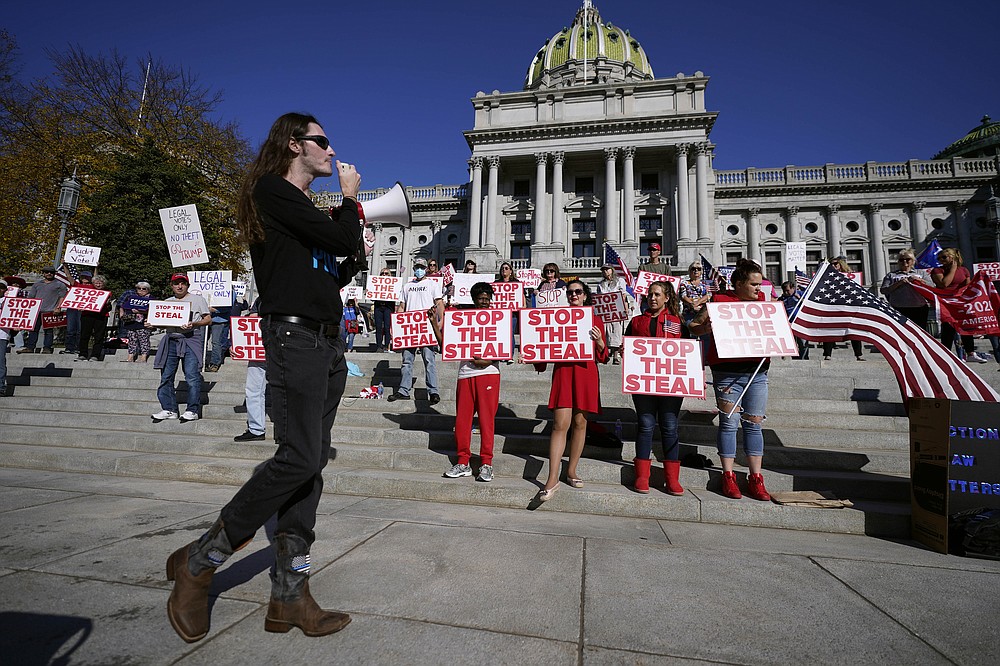 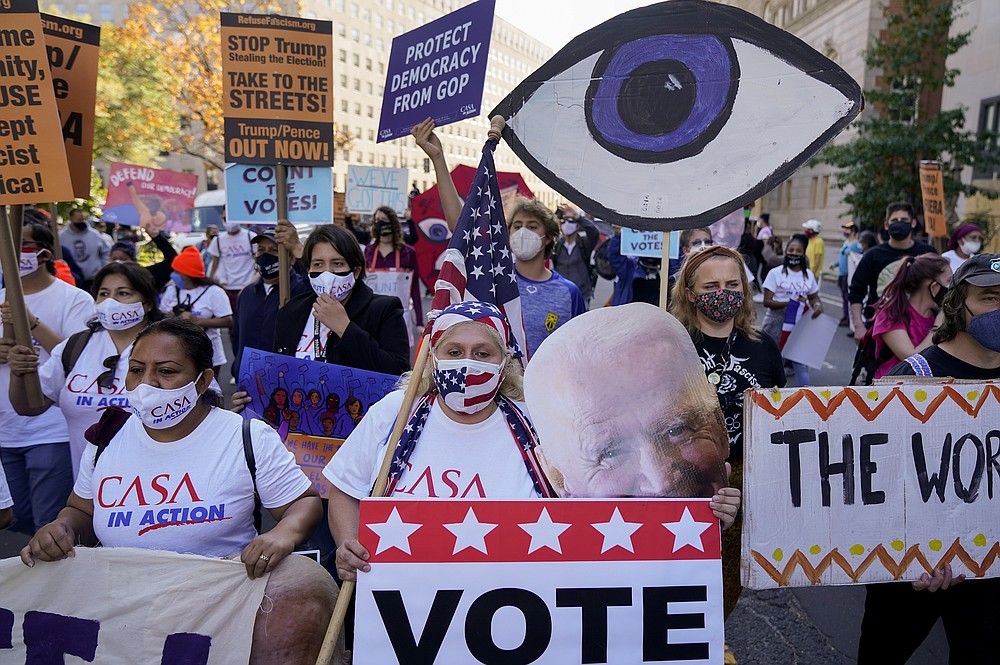