Red Sox bring back Cora after firing him before season 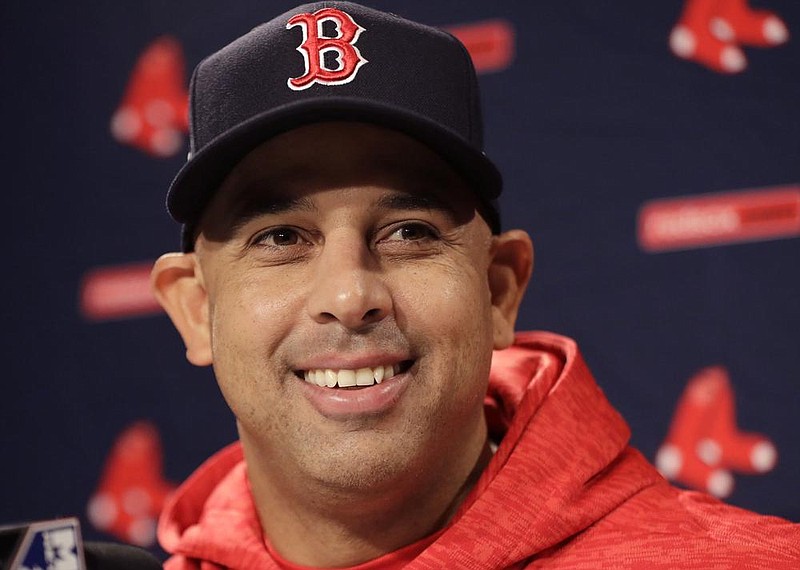 Boston Red Sox manager Alex Cora speaks to media during a baseball work out at Fenway Park, Sunday, Oct. 21, 2018, in Boston, as they prepare for Game 1 of the World Series against the Los Angeles Dodgers scheduled for Tuesday in Boston. (AP Photo/Elise Amendola)

BOSTON -- The Boston Red Sox are bringing back Alex Cora, rehiring the manager that led them to the 2018 World Series title less than a year after the team let him go because of his role in the Houston Astros' cheating scandal.

"I am grateful for the opportunity to manage once again and return to the game I have loved my entire life," Cora said in a news statement Friday. "Boston is where I have always wanted to be and I could not be more excited to help the Red Sox achieve our ultimate goal of winning in October."

Boston announced the decision 10 days after Cora finished a one-season suspension for his role in the Astros' sign-stealing scheme during their 2017 championship run. Cora was Houston's bench coach when he joined the Red Sox in November 2017, and he led Boston to the 2018 title after a franchise-record 108 regular-season wins.

The Red Sox, who finished third in 2019, let Cora go in January after Commissioner Rob Manfred identified him as as a central figure in the Astros' scheme.

"This past year, I have had time to reflect and evaluate many things, and I recognize how fortunate I am to lead this team once again," Cora said. "Not being a part of the game of baseball, and the pain of bringing negative attention to my family and this organization was extremely difficult. I am sorry for the harm my past actions have caused and will work hard to make this organization and its fans proud."

An infielder on Boston's 2007 champions, Cora was mentioned 11 times in Manfred's decision on the Astros. The fallout from the Astros investigation also cost Houston Manager AJ Hinch and newly hired New York Mets manager Carlos Beltran their jobs; Hinch was hired as the Detroit Tigers' manager last week after completing his one-season suspension.

"Alex knows that what he did was wrong, and he regrets it," Red Sox Chief Baseball Officer Chaim Bloom said. "He loves the Red Sox and the game of baseball, and because of that we believe he will make good on this second chance."

Bloom, who joined the Red Sox last offseason, did not hire Cora the first time but was in charge when the team let Cora go last winter. Ron Roenicke was promoted from bench coach to be Cora's replacement, then was let go after the salary-shedding Red Sox stumbled to a last-place finish in the AL East.

"Alex should be managing. He did a really good job here," Roenicke, who was a bench coach on Cora's staff, told reporters after he was fired. "I'm hoping he does this again. Whether it's here or its somewhere else, he should be managing."

The team Cora returns to bears little resemblance to the one he last managed.

Bloom is running the baseball side now. His other big move last offseason was to trade 2018 AL MVP Mookie Betts to the Los Angeles Dodgers along with David Price as part of an effort to get the Red Sox under the threshold for baseball's luxury tax on high payrolls.

But Cora also has hope for improvement in the 2021 season.

Sale is expected to return in the first half. J.D. Martinez, an All-Star his first two years in Boston before struggling in the pandemic-shortened 2020 season, is also under contract for at least one more year. And the Red Sox have plenty of salary flexibility gained in the deal that jettioned Betts and Price.