Stuttgart scores knockout of CAC in first half 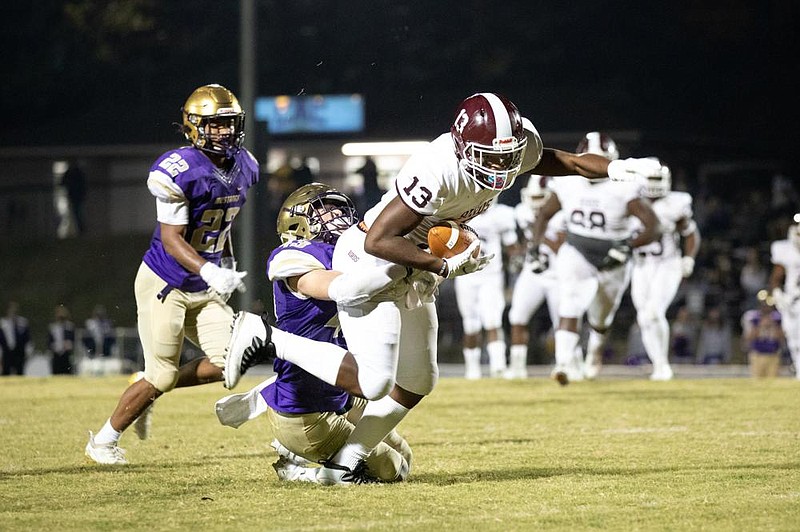 Friday's matchup to decide the 4A-2 Conference championship was no contest.

Stuttgart, ranked No. 5 in Class 4A by the Arkansas Democrat-Gazette, scored on all but one of its possessions in the first half at Mustang Mountain, and the Ricebirds added touchdowns on defense and special teams en route to a 42-14 victory over Central Arkansas Christian.

"We got beat by a better football team tonight," CAC Coach Tommy Shoemaker said. "There's no doubt about that.

The Ricebirds took a 35-0 lead when Merritt Coker recovered a CAC fumble in the end zone with 6:03 to play in the second quarter.

Jaidan Strange, who returned a punt 67 yards for a touchdown in the second quarter, added an 8-yard run with 50 seconds left to play before halftime.

"We just didn't really match up well with them anywhere," Shoemaker said. "They were as advertised. We knew we had our hands full coming in. And a lot of things would have to go right to have a chance. Now we get to start all over and get ready for the playoffs."

The Ricebirds' longest drive was their first one, when they took the opening kickoff and drove 47 yards in 1:43, scoring on a 2-yard run by junior quarterback Pate Kleinback.

Stuttgart Coach Josh Price describes Kleinback as the bus driver of an offense that is loaded with speed and big-play ability.

Price did not throw for a touchdown against CAC, but he completed 5 of 6 passes for 92 yards -- his incompletion coming on a second-quarter CAC interception, the only time the Ricebirds failed to score in the first two quarters.

"He gets it to those fast guys, that's what he's supposed to do," Price said. "We're very pleased with him most of the time."

Fast guys abound for Stuttgart on offense and defense, and Strange -- a ball-hawking free safety -- may be the fastest.

"He has another gear, and he hits that gear in about two steps," Price said.

Shoemaker said Stuttgart's speed on both sides of the ball created problems for a Mustangs team that was without leading receiver Jackson Richmond and inside linebacker Ethan Demarco.

"The best thing," Shoemaker said, "we got out of this without getting anybody hurt."

Daniel Poole scored on a 24-yard run at the 10:51 mark of the second quarter, a 2-play, 44-yard drive set up by Rhett Bohanan's interception of a Palmer Gilbrech pass.

A fumble recovery in the end zone by Merritt Coker -- after an errant Shotgun snap to Gilbrech -- made it 35-0 after Jack Hosman's fifth of six extra points in the first half with 6:03 to play in the half.

A 3-play, 60-yard drive completed the Ricebirds' 24-minute blitz, with Strange taking a direct snap 8 yards with 50 seconds to play in the half.

CAC scored twice in the second half against Ricebirds' reserves on touchdown runs of 6 and 68 yards by Ty Bahnks, who was in the game after the Mustangs' leading rusher, Tyler Williams, left after his second carry of the second half.

Shoemaker said Williams, who rushed 14 times for 58 yards, is OK and should be able to play in two weeks.