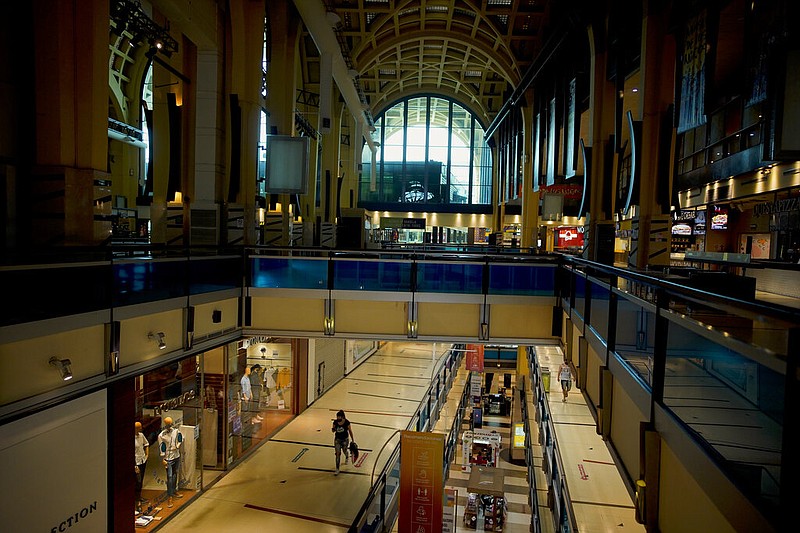 Few people shop amid the novel coronavirus pandemic at the Abasto Shopping Mall in Buenos Aires, Argentina, on Wednesday, Oct. 14, 2020. Walmart Inc. said Friday that it is selling its business operations in Argentina to a South American retailer for an undisclosed amount. (AP / Victor R. Caivano )

Walmart Inc. said Friday that it is selling its business operations in Argentina to a South American retailer for an undisclosed amount.

Walmart has entered an agreement with Grupo de Narvaez, which does business in Ecuador and Uruguay, the companies said in a joint news release. They didn't say when the deal will be finalized.

In a document filed Friday with the Securities and Exchange Commission, Walmart said that as a result of the transaction, it will record a noncash loss of about $1 billion after taxes in the third quarter. The Bentonville retailer will report its third-quarter earnings on Nov. 17.

Walmart will work with the new owner through the transition process and support its sourcing agreements, the company said. However, it will not retain an equity stake in the business as it has in other markets such as Brazil and the U.K.

Dolores Fernandez Lobbe, president and general manager of Walmart Argentina in Bueonos Aires will move to another position within Walmart after the transition.

Walmart's assets in Argentina include 92 stores under various banners. Its 29 Supercenters will be rebranded after a transition period, the company said. Walmart Argentina employs more than 9,500 workers.

Judith McKenna, chief executive officer of Walmart International, said in the release that the Argentinian business and employees "have led and shown resilience throughout this year serving customers when they needed the most."

"We are excited by the local retail expertise the new owners bring to this already strong business, and we believe this deal creates the right structure to help it truly flourish for many years," McKenna said.

In recent years, Walmart has turned its focus to growing its international business in large emerging markets such as India and China. At the company's annual investor meeting in February, chief executive Doug McMillon said that outside of the U.S., the company's priorities are Mexico, Canada, India and China.

Last month, Walmart reached a deal to sell its U.K. business, Asda, to an investor group for about $8.8 billion. That transaction is still pending regulatory approval.

Walmart sold a majority share of its Brazilian operations in 2018.

Dave Marcotte, senior vice president of retail insights for Kantar Consulting, said Walmart has been trying to leave Argentina for at least a year. But with a change in governments, an economy that makes it hard to value assets, and then the pandemic, it's been hard to line up a buyer, he said.

"Just about every other retailer is trying figure out how to get out of it," Marcotte said. "It's a very difficult country to do business in."

Problems in Argentina include a "very intrusive" government that imposes lots of price controls, Marcotte said. Another issue is the inflation rate, which was 34% last year and is expected to run about 50% in 2020.

"From what I understand, [Walmart Argentina] was losing money," Marcotte said. "It was very clear last year that they did not want to take an equity position like they did with Brazil and in the U.K. They just didn't feel that it was worth the investment."

Marcotte said he expects the deal to go through "very cleanly and very smoothly," as the buyer has a good relationship with the government.