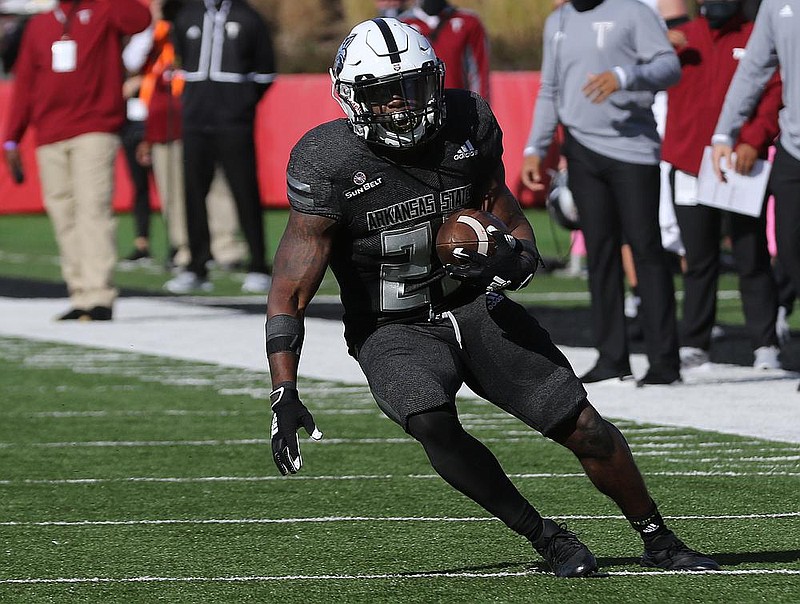 LAFAYETTE, La. -- A spirited effort against a bitter rival wasn't enough to help Arkansas State University snap out of a midseason funk.

Louisiana-Lafayette got a 2-yard touchdown run from running back Elijah Mitchell with 1:13 left in the game, then picked off ASU quarterback Logan Bonner shortly thereafter to pull out a 27-20 victory in front of 5,585 at Cajun Field on Saturday.

Quarterback Levi Lewis rebounded from a dismal start to finish 17-of-29 passing for 244 yards with 1 touchdown and 1 interception for the Ragin Cajuns (6-1, 4-1 Sun Belt Conference), which trailed 6-0 at halftime but generated 332 of their 440 yards in the second half to beat ASU for the third time in a row.

Mitchell finished with 90 yards rushing to go along with his go-ahead score.

ASU Coach Blake Anderson was optimistic afterward because his team looked nothing like the squad that surrendered 52, 45 and 38 points the previous three weeks.

"Two things we talked about was energy and execution," said Anderson, whose team appeared listless at times in their loss to Troy a week ago. "We had a really, really good week of prep, and I was proud of the guys. With as much adversity as we've faced and as bad as we've played a couple of weeks in a row, with just the way games have gone, it'd be easy for them to give in to that. They didn't."

ASU trailed 20-12 late in the fourth quarter but needed just 1:25 to march 91 yards to get in position to tie it. Hatcher delivered a 47-yard touchdown strike to wide receiver Brandon Bowling with 2:24 left to slice the Red Wolves' deficit to two. Hatcher then avoided a sack on the two-point conversion attempt to hit Adams in the right corner of the end zone to knot the game at 20-20.

"Our team has impressed me with the fact that we don't panic, there's a ton of poise," Louisiana-Lafayette Coach Billy Napier said. "We're aware of why things aren't working and why they should work and need to fix it. We did a good job of making adjustments, but this is a special group. Fifth comeback after being down at half this year, that's part of who we are."

Lewis completed just 5 of 11 passes for 54 yards with an interception in the first half. ASU also held Louisiana-Lafayette to just 54 yards rushing, 40 of which came on its final drive of the second quarter. The Red Wolves outgained the Ragin Cajuns 182-108 in total yardage and held a 16:58-13:02 advantage in time of possession.

The problem for ASU was its inability to score touchdowns early.

"We knew it was gonna be a challenge for our offense, just with how big [Louisiana-Lafayette] is up front," Anderson said. "We missed some opportunities that could've changed this game a good bit. We've got to make those plays when we get opportunities.

"Last week it was defensive missed interceptions. This week, it was several missed opportunities on wide-open guys, potential touchdowns that could've got us in the lead by maybe 10-14 points."

Louisiana-Lafayette had more yards (140) on its first three drives of the third quarter than it did in the entire first half. Lewis began making plays with both his arm and feet, and the Ragin Cajuns' defense was the one bowing up.

ASU had a shot to put Louisiana-Lafayette in a bind at the outset. The Red Wolves took the opening possession, quickly drove from their own 28 and had a first and goal from inside the Ragin Cajuns' 10. After picking up 6 yards on three plays, Blake Grupe's21-yard field goal attempt missed when it hit the left upright.

The Red Wolves got a reprieve two series later. Louisiana-Lafayette running back Trey Ragas was stopped inches short on a fourth and 1 at the Ragin Cajuns' 46. ASU maneuvered into another first-and-goal situation but had to settle for a 24-yard field goal from Grupe.

The defense helped ASU record its next score when cornerback Samy Johnson picked off a Lewis pass and returned it 28 yards to ASU's 49. Eleven plays later, Grupe nailed a 35-yarder with 6:37 left in the second quarter to put the Red Wolves up 6-0.

The Ragin Cajuns found success on the ensuing drive, and had a first down inside the 10. ASU's defense stopped Louisiana-Lafayette on fourth down from the 1 when linebacker Justin Rice threw wide receiver Dontae Fleming for a 5-yard loss on an end-around play.

Louisiana-Lafayette didn't waste any time getting things turned around in the second half. The Ragin Cajuns marched 63 yards in four plays, with Lewis sprinting up the middle for a 33-yard touchdown run on a broken play. Nate Snyder's extra point gave Louisiana-Lafayette a 7-6 lead with 13:38 remaining in the third quarter.

Lewis added to the Ragin Cajuns' advantage with 5:56 to go in the period when he flipped a short pass to Fleming, who scampered around the left side untouched for a 52-yard score.

ASU steadied itself, covering 80 yards in 11 plays to score on a 4-yard run by running back Jamal Jones. The two-point conversion attempt was no good, leaving Louisiana-Lafayette with a 14-12 lead at the 10:37 mark of the fourth quarter.

The Ragin Cajuns pushed their advantage to 20-12 on 35- and 43-yard goals from Kenneth Almenda on back-to-back possessions. The teams exchanged touchdowns at the end until Bonner's interception sealed the Red Wolves' fate.

"We obviously executed better than we have the last couple of games, especially defensively, " Anderson said. "We got a complete game out of those guys. But this builds confidence.

"No we didn't win, but we improved tremendously from last week and the week before until now. We can build off that moving forward."