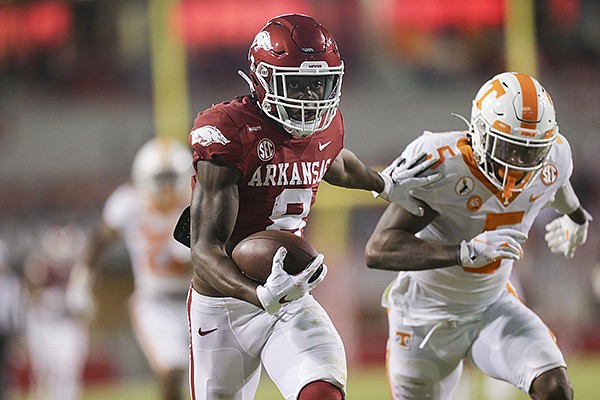 Arkansas receiver Mike Woods (8) is chased by Tennessee defensive back Kenneth George (5) near the end of a 56-yard reception during a game Saturday, Nov. 7, 2020, in Fayetteville.

FAYETTEVILLE -- The University of Arkansas had a sleepy first half on Saturday by going scoreless on offense, and being hammered by the Tennessee offensive line and the Volunteers' rugged run game.

That all reversed in the second half.

The Razorbacks unleashed a barrage of big plays on offense, cut off the Vols' running attack and nabbed two interceptions to vault past Tennessee 24-13 before a crowd of 16,500 at Reynolds Razorback Stadium.

The Hogs' dominant defensive run ended with interceptions by Eric Gregory and Jalen Catalon as Arkansas limited the Volunteers to 115 yards in the second half.

Arkansas, playing turnover-free for the second consecutive game, put on its parade of big plays and rallied from a 13-0 halftime deficit to blow past the ground-heavy Volunteers.

"It was 13 points," Arkansas Coach Sam Pittman said. "It's not like we were down 50. Our locker room felt a little down.

The Razorbacks extended their win streak over Tennessee to three games dating back to 2011. Arkansas broke a seven-game losing streak to SEC East opponents that dated back to a 31-10 rout of No. 11 Florida in 2016.

"It's like I told the players, I've been a part of really good programs. I know how to get there. We have to learn to play at a higher level on Saturdays."

The Razorbacks started their comeback with a marathon march to open the second half. The 17-play drive featured 5 of 5 third-down conversions and ended on Woods' 1-yard slant catch to slice Tennessee's lead to 13-7.

It didn't take long for Arkansas to get a leg up after a Tennessee three-and-out in which quarterback Jarrett Guarantano fell hard on his back and helmet and did not return with a head injury.

Woods got past cornerback Kenneth George for a 56-yard gain on the Hogs' second snap of their next series. Franks ran play action on the next snap and found Kern for a 6-yard touchdown and a 14-13 lead.

Two plays into Arkansas' next drive, the offensive line gave Franks time to stand in the pocket as he unloaded a deep ball for Burks, who caught it around the 20 and ran in for a 59-yard touchdown, the Hogs' longest scoring play of the season, to create a 21-13 lead.

A.J. Reed completed the scoring with a 48-yard field goal to cap the big-scoring quarter with Arkansas ahead 24-13. At that point, the Hogs had outgained the Volunteers 257-16 in the second half.

"I mean, 24 points and 16 yards," Pittman said. "I tell you what ... you know what momentum is and we had it. And we rode it at least all the way through the third quarter."

Said Arkansas linebacker Bumper Pool: "We never lost the faith. To be honest, they weren't doing anything we didn't know they were going to do. We just weren't executing, and I think by halftime everyone was like, 'We're way better than this. Let's go show it.'

"Then we came out in the second half and the momentum was rolling. That was probably one of the most fun halves of football I've ever played."

Franks improved to 3-0 against Tennessee and completed 18 of 24 passes for 215 yards and 3 touchdowns.

"Coming out in the third quarter, we had a fast start and got some momentum and ran with it," Franks said. "It was a good quarter."

Tennessee dominated the opening half with its bruising running attack operating behind a beefy front line.

The Volunteers ran 28 plays on their first two possessions and built a 10-0 lead. Quarterback Jarrett Guarantano was sharp when needed, such as a tone-setting 10-yard strike to Josh Palmer on a third-and-9 snap on the third play of the game.

Brent Cimaglia drilled a 50-yard field goal at the 9:25 mark for a 3-0 lead, and Tennessee launched a 16-play, 81-yard touchdown drive on its second series. Eric Gray, who rushed for a game-high 123 yards, led the way with nine carries on the series, capped by his 1-yard touchdown run.

Arkansas finally ended the Vols' lock on clock control with a 16-play series that reached the Tennessee 3. Boyd had five carries for 24 yards on the series, but Franks' play-action strike to Kern over the middle was the biggest play, netting 24 yards to the Vols' 16.

Franks' slant to Burks for 9 yards converted third and 6 to the Tennessee 3, but there the Hogs bogged down. Reed misfired wide left on a 21-yard field goal try to keep the Hogs off the board.

The Arkansas defense notched its first three-and-out on Tennessee's next possession, but the offense could not carry the momentum after Smith's 23-yard gain opened the next series.

Smith just lost the handle on a screen pass, resulting in a 10-yard loss. After Franks' 16-yard scramble on third and 20 reached the Arkansas 49, there were scattered boos when Pittman elected to punt on the resulting fourth and 4.

Tennessee took its next possession 49 yards, aided by a defensive holding call against Hudson Clark and Guarantano's 18-yard throw to Palmer. Cimaglia's 48-yard field goal made it 13-0 with 1:57 left in the half.