His father’s black-and-white photographs of her are in Fort Smith on a national touring exhibit. by Ellis Widner | November 8, 2020 at 3:14 a.m. 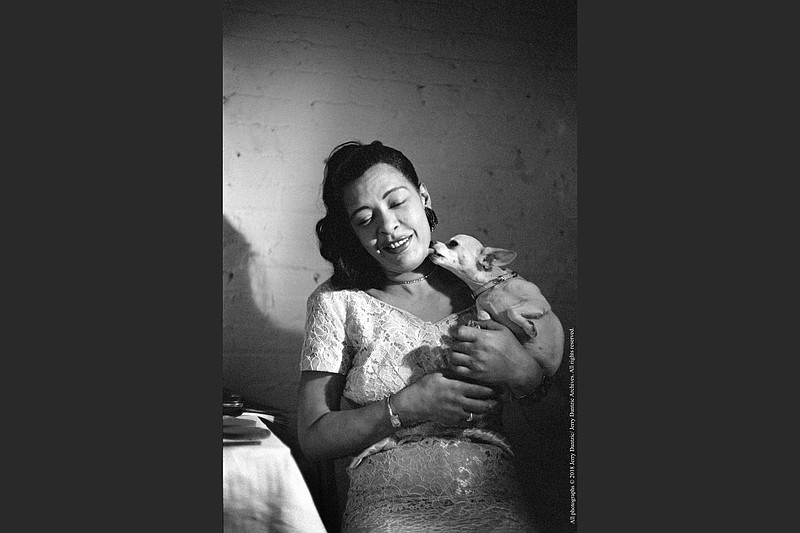 The voice coming over the radio circa 1980 mesmerized a then barely teen-aged Grayson Dantzic, who grew up an only child in Brooklyn, N.Y.

"Billie Holiday came to me when I didn't know I was looking for her," Dantzic says of the woman who recorded indelible songs such as "God Bless the Child," "In My Solitude," "Strange Fruit," "Don't Explain" and "For All We Know."

"She sang about a world that was so far away from I where was and I wanted to go there."

He was listening to a New York radio station's 24-hours-long tribute to the legendary jazz/blues singer on her birthday (April 7). Dantzic describes the singer's haunting voice as covering "the entire landscape of joy, sorrow, sexual desire ... she gave everything weight. She was singing her truth in a major way."

"I got 18 hours of it on cassette tapes ... and I still have them." He recorded many more broadcasts, which included outtakes and interviews.

A decade before he was born, his father, noted photographer Jerry Dantzic, spent a week photographing Holiday during her week-long engagement in April 1957, at the Sugar Hill club in Newark, N.J. He was on assignment from her label, Decca Records. Holiday's album "The Blues Are Brewin'," the cover of which Grayson Dantzic believes was photographed by his father, was released in 1958.

Dantzic says the dad he knew "was a Guggenheim fellow who had a 1978 show at the Museum of Modern Art in New York City, "Jerry Dantzic and the Cirkut Camera," an exhibition that Grayson said marked his father's emergence as an artist. (The Cirkut camera, a rotating panoramic camera, emerged circa 1905 and increased the camera's field of vision). Most of Dantzic's images, rural and urban American landscapes, were over six feet in length.

Grayson says he was never allowed in his father's photography studio. That changed in the late 1990s.

"He was recovering from cancer. Dad sent me upstairs to his photo studio. 'That's who I am,' he said. I came down from the studio almost in tears."

It was in that studio that Grayson found the contact sheets of the 11 rolls of black-and-white film his father shot of Holiday. "My father hadn't looked at them since he took them," he says. Grayson describes the experience as "an epiphany" that led him to become an archivist.

Grayson also found images of Ingrid Bergman, taken by his father when he was a publicist for film studio 20th Century Fox, other important jazz artists such as Louis Armstrong and Chet Baker, and stunning photographs of New York City. The New York images became the subject of the first book on his father's photography, organized and written by Grayson. "Jerry Dantzic's New York" was published in 2002. His father died in 2006.

"It took me nearly 20 years to get a publisher interested in the Billie Holiday images," says Grayson, who is an archivist, educator and curator. The book was published in 2017 and Grayson and the Smithsonian developed the Holiday exhibition. He has other book ideas in various stages of planning, including ones about his father's jazz images and the Cirkut camera photographs. He also is planning a centennial exhibition of his father's work to open in 2025.

Jerry Dantzic photographed Holiday on the stage and off, using only available light.

"Dad told me he never disrespected her with the camera," Grayson says. "He didn't use a flash because the light it made was so harsh and he didn't want to intrude." The images of Holiday are intimate and personal, presenting the singer who had one of American music's greatest and most influential voices as a more fully rounded person than most of us are accustomed to.

"There is a shattered image of her," Grayson says of Holiday's persona. "She believed in love. Her personal life was a challenge; she was taken advantage of by a lot of people."

For many, she is the character portrayed by Diana Ross in the film "Lady Sings the Blues." Holiday was defined by her problems with love and drugs.

The exhibition presents a fuller picture.

"My dad had a great rapport with her and it shows in the photographs. There is joy in the images of her with her godchild and greeting her fans," Grayson says. There also are images of Holiday on the stage, in her kitchen and with Pepi, her pet chihuahua.

What made Grayson tape so many Holiday radio broadcasts as a young man?

"This was before boxed sets were so common," he says, adding he was fascinated hearing her "develop songs, her laugh." Holiday, who also wrote or co-wrote a number of her best songs, "was so close to the spirit of a song."

While his school friends thought his interest in Holiday was "cool," Grayson also listened to other artists of the time ... Stevie Wonder, The Pretenders, Traffic, The Band and others. But he considered Holiday and Frank Sinatra his "spiritual parents."

"People should really rethink about what they are told about her and listen to the music. I hope these photos become part of a re-evaluation of Billie Holiday and her life [so people will have] a more fully realized vision of who this woman was. Billie Holiday is still resonant, important; the connection to Black culture is still very strong. She was so cutting edge. She was pushing it and society couldn't handle her.

"She changed the world and challenged the way to be a singer. Her recording of 'Strange Fruit,' a devastating song about lynching, did more to raise awareness and consciousness. She put people on notice and did it through song."

CORRECTION: The Sugar Hill club is located in Newark, N.J. An earlier version of this article gave an incorrect city.