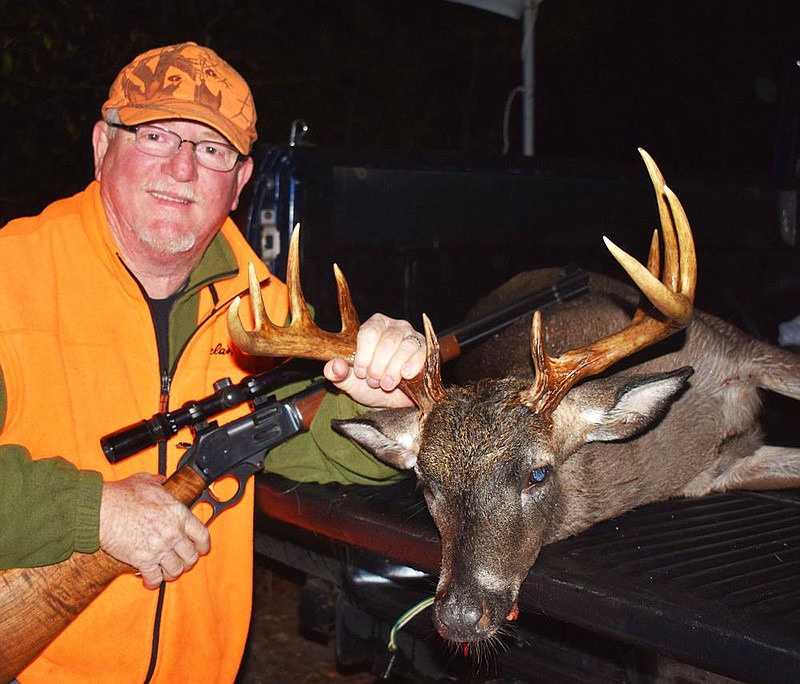 Killing mature bucks in the rut, like this one Mike Romine of Mabelvale bagged in 2018, involves a three-prong strategy. (Democrat-Gazette le photo)

For deer hunters, the rut is like Christmas, and it encapsulates all of the excitement that we love about the sport.

The rut is the height of the breeding season for whitetailed deer. The dates vary across the South by about six weeks, but Arkansas deer hunters generally associate the rut with Thanksgiving.

Ralph Meeker, the deer program coordinator for the Arkansas Game and Fish Commission, said that the amount of daylight, or photoperiod, triggers breeding activity in whitetails. In Arkansas, Meeker said, the rut occurs in a descending gradient from northwest to southeast. The average peak of the rut in Arkansas is Nov. 11, he added, which is why Arkansas always opens modern gun deer season on the second Saturday of November.

How can that be? A day isn't any longer in the Carolina Lowcountry than it is in the Arkansas Ozarks, so why does the rut vary so much?

Meeker said he believes a genetic or evolutionary component might be involved. Deer were largely extirpated throughout the South by the early 1900s. Southern states replenished their deer herds by importing stock from other parts of the country. Deer that originated from imported northern stock might retain a genetic timetable from their ancestors.

Hunters know by heart the peak rut dates in the areas where they hunt. That's when mature bucks are less cautious and less elusive, and thus more likely to encounter hunters.

Killing mature bucks in the rut involves a three-prong strategy: key on does, minimize your presence in the woods, and strategically pick your time to hunt hot stands based on prevailing wind.

Across the Gulf Coastal Plain, landowners have rapidly replaced hardwoods with pines. To compensate for the loss of hard mast, hunters rely heavily on cultivated food plots. The main advantage of food plots is that they attract does. A concentration of does will always attract bucks.

You won't often see mature bucks in a food plot, though. They hover around the edges and remain concealed in the woods. A hunter must know how bucks approach areas where does concentrate, and that requires scouting. Remote cameras are valuable because a hunter can only be in one place at a time, but multiple cameras gather valuable intel from multiple locations without distributing human scent.

Cameras reveal whether a dominant buck is in an area. They also reveal the trails a buck uses between bedding and feeding areas, and at what time he uses them.

A mature buck usually does not walk the same trail that the does use. He cuts his own trail near the doe trail, and he uses it repeatedly. If you hunt the same areas every year, you will have noticed this. From scouting and from your remote cameras you can anticipate from which direction a particular buck will approach. The wind must be blowing the same direction.

Using a doe-in-heat bleat, followed by a lesser buck grunt, is an effective ruse to bring a buck out of hiding. You can improve your odds by hunting only in the afternoon and evening. Deer often move in the early morning, and you risk bumping a buck walking to a stand before daylight. It's easier to slip in unnoticed in the afternoon while the buck is bedding.

In 2015, I experienced multiple phases of the Arkansas rut in four days. During the third weekend of November, the Old Belfast Hunting Club hosted Bill Heavey, a columnist for Field & Stream. We hunted a tower stand in the middle of a young cutover bounded by uneven age pine thickets. The distance to the edges was about 250 yards to 330 yards.

To relieve the boredom, I did some aggressive rattling. To my astonishment, the biggest buck ever seen on the property emerged from the thicket and stood at the edge scanning the cutover. A doe was with him, and he followed her back into the thicket. I called him to the edge several more times over the afternoon, but he never strayed from that doe.

It happened again the next day while Heavey hunted the same stand with Mike Romine of Mabelvale. The buck and his doe were locked down. Two days later, Romine killed the "Lockdown Buck" from the same tower stand that Heavey hunted. Romine killed him at 75 yards with an SKS rifle. People do use military-style firearms for hunting.

"Another buck came in the area," Romine said. "Competition will really make them foul up. They want to earn the right to breed. If another buck is there competing, they might run in the wide open and not even think about it."

"As soon as I got in my stand that day, I heard those bucks fighting in the thicket for a good long while," Romine continued. "The doe came out, and they came sprinting behind her trying to get to her first. They never considered that they were in any danger."

At the same time, near Clarendon, I sat in a tripod stand overlooking a food plot that bordered a slough. Having made no attempt to conceal my body, to be still, to subdue my scent or even to be particularly quiet, I was shocked to watch a decent buck stroll right down my scent plume. Eyes forward, he walked right under my stand, veered to the side of the plot and disappeared into the slough. A half hour later, he emerged from the slough and chased does through the thicket.

I would have shot that buck at Old Belfast, but he didn't meet the minimum requirements for the Clarendon club.

You'll see all that and more during the rut. That's why it's a deer hunter's holiday.