Daniel Tiger to the rescue: Kids shows are tasked with tackling the many concerns of turbulent 2020 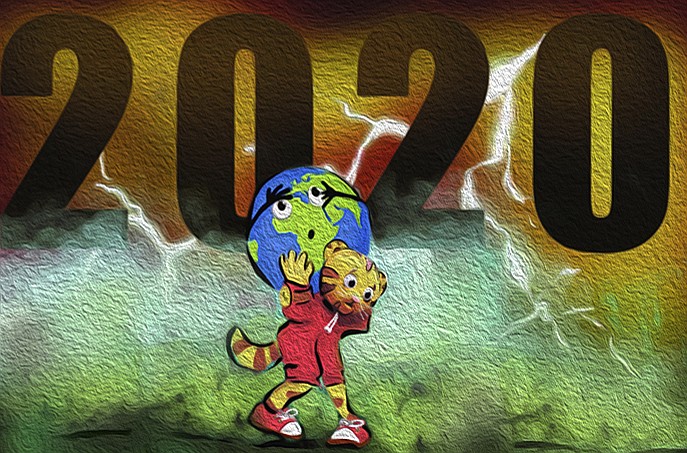 Since he arrived in the world eight years ago, Daniel Tiger has overcome many an obstacle.

There was the whole potty-training ordeal and a rocky adjustment to becoming a big brother. And who could forget the peach allergy?

But like most Americans — furry and otherwise — Daniel has never endured anything like 2020. This summer, he was devastated to learn he wouldn't be going to the annual carnival.

"We're staying far apart so we don't accidentally spread germs," Dad Tiger tells a teary-eyed Daniel in "Daniel Tiger's Neighborhood: Won't You Sing Along With Me?," a special created to help families cope with the covid-19 pandemic.

Daniel isn't the only anthropomorphic character feeling the strain of multiple crises. In a short episode of "Arthur" released this summer, the bespectacled aardvark and his friend Buster call each other on Zoom to talk about a troubling video they watched.

"I can't believe someone would be hurt like that, just because they're Black," says Buster, a bunny. No further details are given, but none are necessary. They call Mrs. MacGrady, the school lunch lady and a former civil rights activist, for guidance. "Racism is like a disease," she tells them. "If you don't treat it, it will get worse."

Pretty heavy stuff for "Arthur's" 4- to 8-year-old target audience, but the seismic events of this year, including the spread of a deadly virus that has upended daily life and a societal reckoning over systemic racism and police violence, have rocked the gentle world of children's television as never before.

While the medium — especially the educational programming on PBS — has a long history of tackling thorny social problems and has been responsive to changing social mores, the makers of kids TV have approached the dire news this year with unprecedented immediacy and candor.

"We knew that these were issues that needed attention," says Linda Simensky, head of content for PBS Kids. "We look at these situations and think, 'OK, how can we help? What is it that we can do that other people might not be able to do?' And what we can do is put on shows where trusted characters and trusted voices are able to be role models for kids."

Mere weeks into the pandemic, "Sesame Street" released a special called "Elmo's Playdate," following the beloved red Muppet as he spent socially distanced time with friends (new episodes of the children's TV staple first air on HBO Max but are also available on PBS). "The Power of We: A Sesame Street Special" helped youngsters understand the importance of fighting intolerance, while "Sesame Street"-theme town halls on CNN discussed racism and the basics of covid-19.

A half-hour special, "PBS Kids Talk About: Race and Racism," released in October, is designed to foster candid discussions about diversity between parents and their children.

The discussion has also spread beyond the earnest realm of public television. In September, Netflix introduced "Bookmarks: Celebrating Black Voices," in which celebrities including Oscar winners Lupita Nyong'o and Common read children's books about the Black experience.

Ever since Fred Rogers first zipped up his cardigan, children's television has actively engaged with social issues. The minister and puppeteer became a national treasure by imparting lessons about divorce, death, racism and violence to young viewers of "Mister Rogers' Neighborhood." In a moment celebrated in the documentary, "Won't You Be My Neighbor?," Rogers sent a powerful message about tolerance and integration by sharing a wading pool with Officer Clemmons, played by Francois Clemmons, in 1969.

Over five decades on the air, "Sesame Street" has helped kids deal with adversity and championed inclusion through such characters as Julia, a Muppet with autism, and storylines about racism, disability, adoption, divorce and incarceration. "Sesame Street" sensitively addressed the terrorist attacks of 9/11 with an episode in which Elmo is traumatized by a fire at Hooper's Store. It has since aired regularly on PBS stations after natural disasters or other emergencies.

Simensky has pushed to create more topical kids programming that directly confronts problems in the news, such as an episode of "Arthur" about a hurricane. "Everyone at PBS Kids is thinking, 'What can we do to be helpful?' There will be people who disagree with this approach and disagree that this is an appropriate topic for kids. And my advice to those people is, 'Don't watch it.' And that's the beauty of television. You can turn it off."

"We continue to draw from Mr. Rogers' legacy on everything that we do," says Christopher Loggins, supervising producer for "Daniel Tiger's Neighborhood," an animated spinoff of "Mister Rogers" following the children of characters from the Neighborhood of Make-Believe. "One thing that he said is, 'What's mentionable is manageable.' If you can talk about things, it might make them easier to understand, and that's the approach we took" in making the covid-19 singalong special, Loggins says.

Each episode of "Daniel Tiger's Neighborhood" goes through a rigorous research process. Storybook versions of the script are read to children in a child care setting to gauge their effectiveness. Child development experts review each draft to ensure the show is developmentally appropriate and, in the case of the "Won't You Sing Along With Me?" special, identified questions that 2- to 4-year-olds — the target audience of the show — might have these days, like why they can't see friends and family like they used to. In one scene, Daniel gets frustrated when his dad, who's working from home, won't play with him.

"We really wanted to focus on the social and emotional aspects" of the pandemic, Loggins says. "They hear people are getting sick, but we didn't want to cause too many fears about getting sick. We felt that if we could show Daniel going through some of the things that they might be experiencing right now it might make things a little easier for them."

Typically it takes 40 weeks from script completion to deliver a completed episode of "Daniel Tiger's Neighborhood," but the team at Fred Rogers Productions started writing the script in April, and the episode first aired in August.

Both "Won't You Sing Along With Me?" and "PBS Kids Talk About Race and Racism" are "very specific and very timely," Simensky says. "If both of them went out of date very quickly, I'd be fine with that."

In 1969, the Children's Television Workshop asked Henson, who was based in New York City producing commercials, to contribute some puppets to its new children's show, "Sesame Street." Henson created Big Bird, Oscar the Grouch, Bert and Ernie and Cookie Monster. The puppet segments proved to be one of the most popular parts of the new show and their presence was expanded, giving Henson an exit from the world of commercial production.

Henson worked some of the puppets and directed short films and animated segments for the show. He also produced a series of TV specials called "Tales From Muppetland," which adapted fairy tales with Muppet characters. "Sesame Street" continues to air on PBS and on channels around the world.

Putting out a special about race, though essential, required additional care.

"Even just the idea of leaning in and saying words like 'race' and 'racism,' which we've shied away from until now, felt new to us, but we felt very strongly that we should do this. And we were very careful. We didn't just jump in. We talked to a lot of advisers."

One of those advisers was Aisha White, director of the P.R.I.D.E. (Positive Racial Identity Development in Early Education) program. The message she wanted the special to impart was that "parents need to be talking to their children about race at a very young age. The first thing they need to do is help their children understand that it's OK to wonder about these things, to talk about these things and to question these things. Our message is to make this conversation about race as ordinary and everyday and consistent as any other conversation that you would have."

The special features real families talking about the concept of race, how it can be used to treat people unfairly and what they can do to fight discrimination. Clips from PBS shows, such as Rep. John Lewis' visit to "Arthur," help underscore the message. Several of the families discuss their experiences at Black Lives Matter protests, and one father, quoting the late civil rights leader, urges his daughter to get into "good trouble."

"These children are actively involved in demanding the change they want to see in the world," says poet and activist Amanda Gorman, who hosts the special and believes that TV plays a powerful role in the lives of children. "It's the idea that if you don't see it, you can't become it. TV is often the first signifier to children that their dreams are possible and their truths are something not to be ignored."

"Bookmarks," on Netflix, is hosted and executive produced by 15-year-old Marley Dias. As the founder of the #1000BlackGirlBooks campaign, which aims to collect and donate books with Black female protagonists to libraries, she helped select the books featured in "Bookmarks." (Viewers without a Netflix subscription can watch the series for free on the Netflix Jr. YouTube channel, which includes timely episodes of the whimsical educational series "Storybots.")

The selections explore Black history and promote positive imagery. In one episode, actress Tiffany Haddish shares "I Love My Hair," in which a young girl muses about the range of ways she can wear her tresses. Haddish ends the episode by removing her wig and revealing a shorn scalp. "Love who you are!" she says.

"All the people on the show were once children, sitting in a classroom, not seeing themselves," Dias says, and the goal of the show is to break that cycle. And while "Bookmarks" might speak to the moment, its message is anything but fleeting. "We care about addressing current issues. But racism is not just a current issue or event, it is part of the system that Black people experience every day." 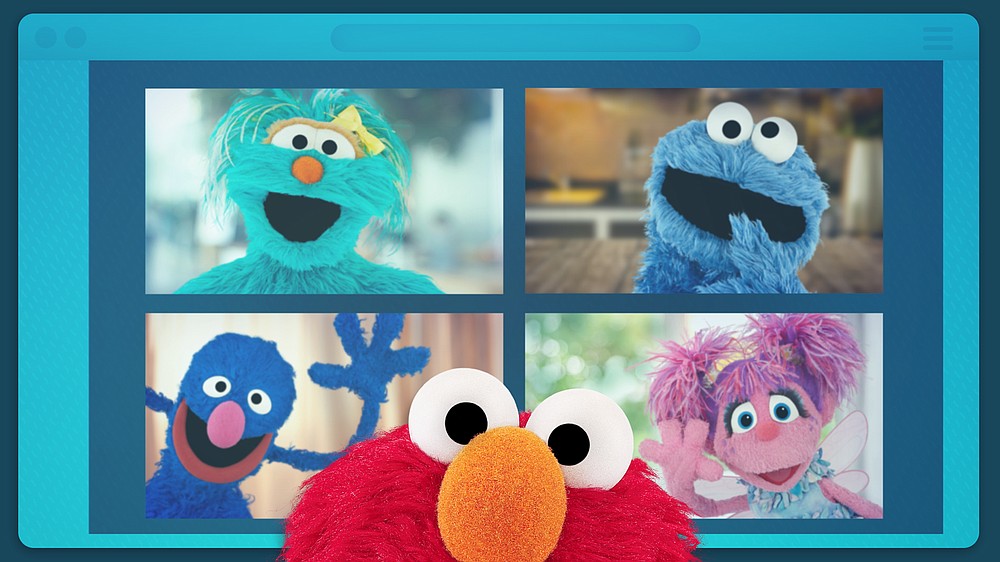 First aired in April, "Sesame Street: Elmo's Playdate" is a half-hour special that follows Elmo, Grover, Cookie Monster, Abby Cadabby and a few celebrities as they find new ways to play and learn together in the pandemic. (Photo courtesy Sesame Street Workshop)
ADVERTISEMENT