U.S. hit with tariffs over Boeing 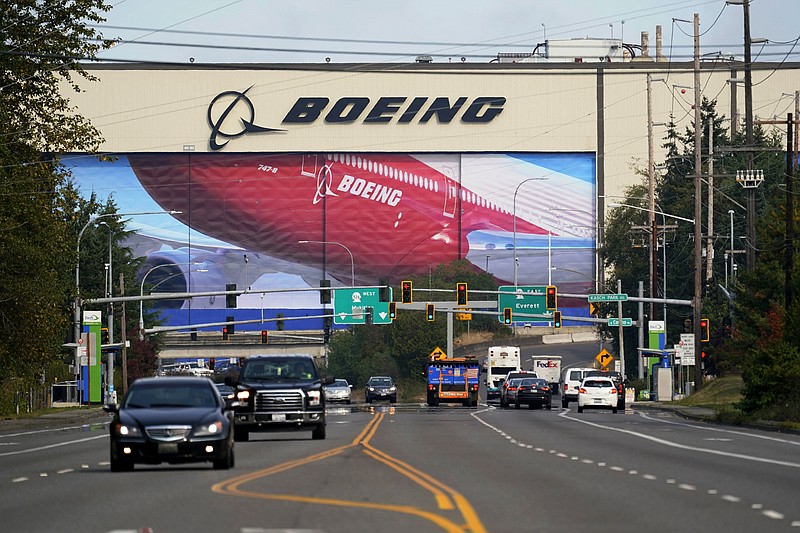 FILE - In this Oct. 1, 2020 file photo, traffic passes the Boeing airplane production plant, in Everett, Wash. The European Union pressed ahead Monday Nov. 9, 2020, with plans to impose tariffs and other penalties on up to $4 billion worth of U.S. goods and services over illegal American support for plane maker Boeing, but expressed hope that trade ties would improve once President Donald Trump leaves office. (AP Photo/Elaine Thompson, file)

BRUSSELS -- The European Union said Monday that it would impose tariffs on up to $4 billion worth of U.S. goods and services over illegal aid for plane-maker Boeing -- but expressed hope that trade ties would improve once President Donald Trump leaves office.

European trade ministers agreed on the move a few weeks after international arbitrators gave the EU the green light for such punitive action. The World Trade Organization had deemed illegal some U.S. support for Boeing -- which is a bitter rival to Europe's Airbus -- and said the EU could make up for that with a limited amount of penalties on U.S. trade.

"Regrettably, in spite of our best efforts due to the lack of progress from [the] U.S. side, we can confirm that the European Union will later today exercise our rights and impose counter-measures awarded to us by the WTO," EU Commission Executive Vice President Valdis Dombrovskis said. The tariffs will take effect today.

The WTO had ruled that Boeing was given an unfair edge over Airbus by tax breaks from Washington state, where Boeing once had headquarters. But after the WTO decision, the state repealed the tax breaks, making the EU's complaint obsolete in the view of U.S. officials.

"The United States is disappointed by the action taken by the EU today," said U.S. Trade Representative Robert Lighthizer. "The alleged subsidy to Boeing was repealed seven months ago. The EU has long proclaimed its commitment to following WTO rules, but today's announcement shows they do so only when convenient to them."

A year ago, the WTO ruled in a similar fashion in favor of the United States, allowing it to impose penalties on EU goods worth up to $7.5 billion -- including Gouda cheese, single-malt whiskey and French wine -- over European support Airbus.

After Trump also imposed tariffs on EU steel and aluminum and threatened punitive duties on cars, the Europeans had hoped that he would hold fire on the tariffs related to the Airbus-Boeing dispute. But having repeatedly failed to achieve a negotiated solution, the EU decided to announce punishment of its own.

"We call on the U.S. to agree that both sides drop existing counter-measures with immediate effect so that we can quickly put this issue behind us," Dombrovskis said. He declined to provide precise details of the tariffs, which were to be made public in the official EU journal later Monday, but said they would hit agricultural and industrial products, among others.

"We are not escalating anything, we are exercising our rights," Dombrovskis said, adding that the EU is "mirroring the U.S. approach" in the kinds of duties it is imposing.

German Economy Minister Peter Altmaier said "this step was logical," and that most of the 27 EU member countries agree.

Asked why the EU didn't wait until Trump leaves office, Altmaier said: "The U.S. tariffs have already been valid for over a year. We won't know until about February or March exactly who in the new administration has the power to speak for this important area, so a solution had to be found now in the hope that it can prevent a further escalation."

The Europeans are hopeful that the hard-line U.S. trade stance will soften under projected election winner Joe Biden. Dombrovskis welcomed Biden's commitment to international alliances, the multilateral system and to improving ties with the EU.

Expressing hope for more rules-based and less contentious trans-Atlantic ties, Altmaier said most European countries see Biden's projected victory "as an opportunity for us to take a new approach to our trade relationship and to solve the trade conflicts we have with the U.S."

In terms of tariffs over Boeing, the EU had earlier released a preliminary list that suggests it could go after a wide range of U.S. products, including frozen fish and shellfish, dried fruit, tobacco, rum and vodka, handbags, motorcycle parts and tractors.

The president of the U.S. Distilled Spirits Council, Chris Swonger, said the new tariffs "will be a major blow" to the spirits industry, "especially craft distillers who are struggling to regain their footing following the closings of distillery tasting rooms, restaurants and bars due to covid-19." Whiskey exports to the EU have already declined by 41% due to the bloc's retaliation over Trump's tariffs on steel and aluminum in 2018.

The Europeans remain reluctant to ramp up trade tensions as the coronavirus pandemic ravages economies around the world.

Some 16 million workers on both sides have jobs that are supported by trans-Atlantic trade, the biggest such relationship in the global economy. Even before the pandemic hit, tariff wars over the past four years have affected companies and people making and selling a whole host of goods.

Boeing itself said last month that it will cut 7,000 more jobs as the virus smothers demand for new aircraft and pushed it to a loss.

Information for this article was contributed by Mark Carlson, Angela Charlton and Geir Moulson of The Associated Press. 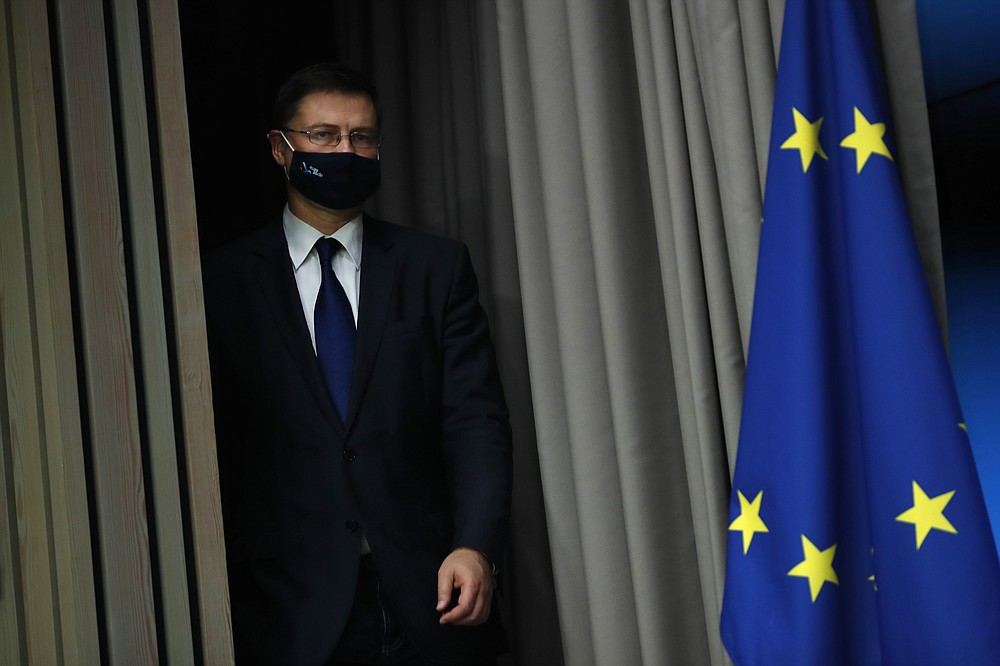 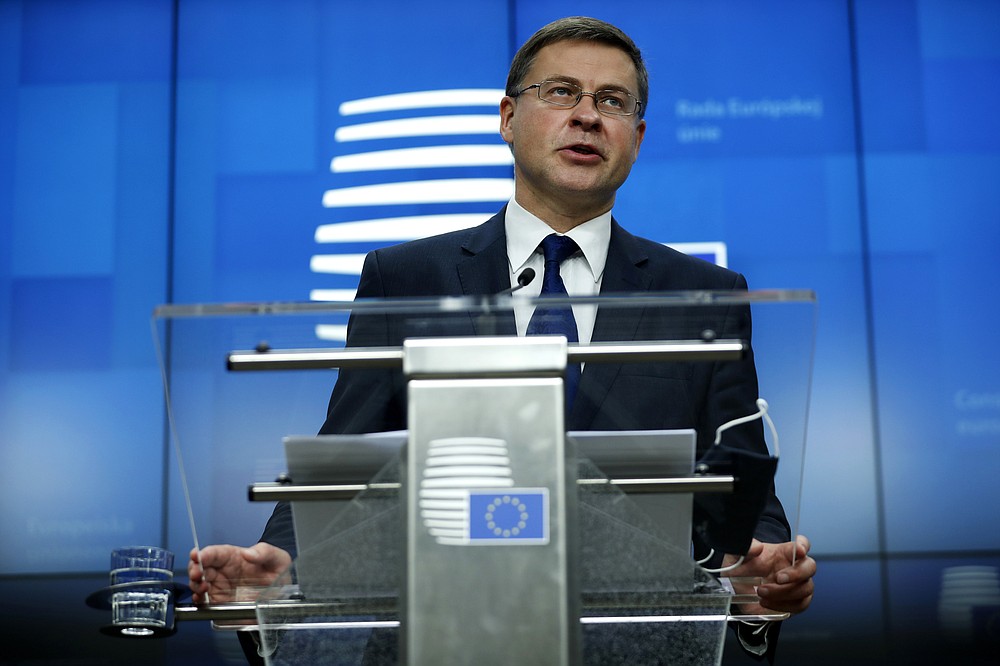 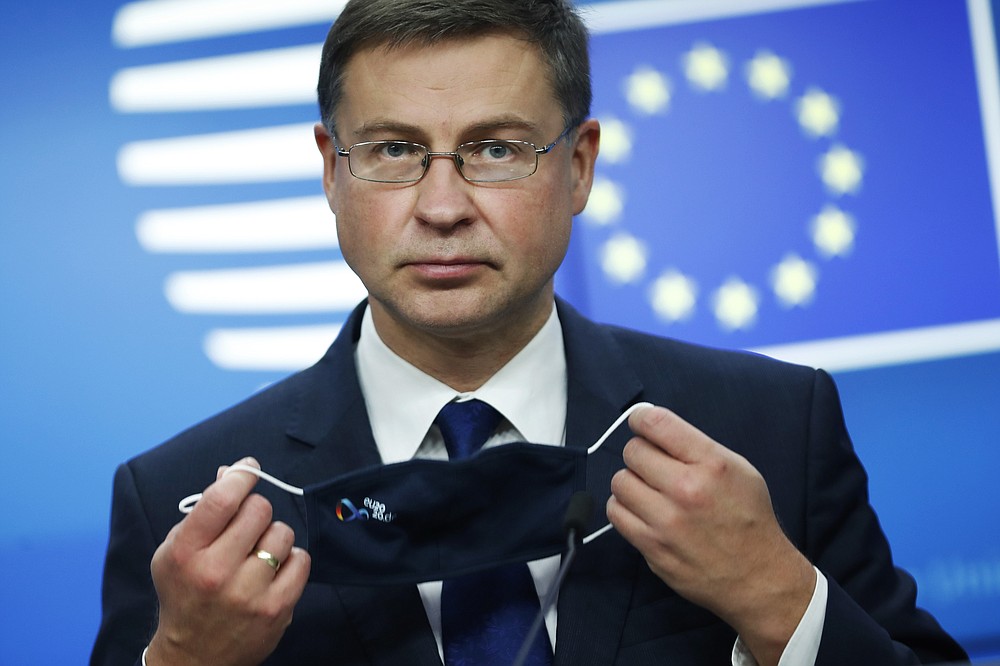 European Commission Vice-President Valdis Dombrovskis takes off his protective face mask prior to addressing a media conference after a meeting of EU trade ministers, in videoconference format, at the European Council building in Brussels, Monday, Nov. 9, 2020. European Union trade ministers on Monday exchanged views on the trade policy review and relations with China and the United States. (AP Photo/Francisco Seco, Pool)
ADVERTISEMENT