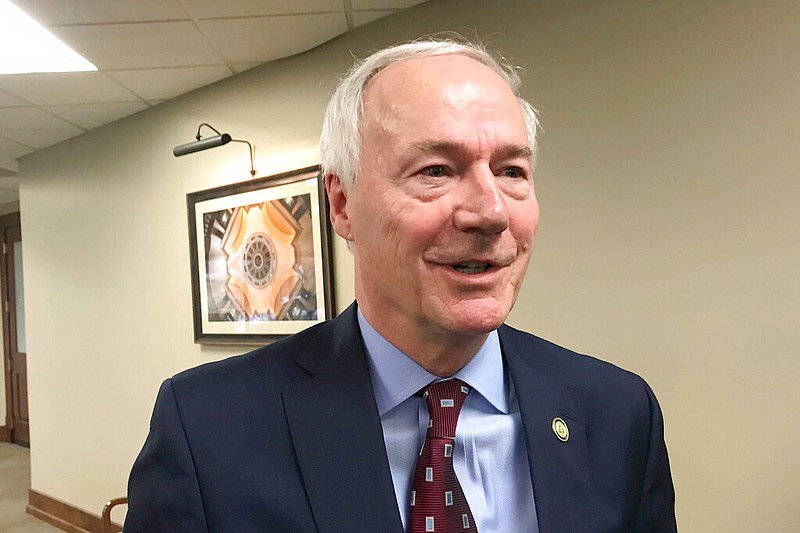 Gov. Asa Hutchinson proposed a $5.84 billion general revenue budget for the fiscal year starting July 1 -- a $161 million increase over the current funded budget of $5.68 billion -- with planning for $50 million a year in income-tax cuts for low- and moderate-income Arkansans.

Most of the increased general tax revenue would go to human services programs, public schools and colleges and universities under the Republican governor's fiscal 2022 budget.

The general revenue budget in the current fiscal year totals $5.89 billion, and the state's April 2 forecast will provide $5.68 billion in general revenue for that budget, leaving $212.2 million unfunded.

On April 2, the Arkansas Department of Finance and Administration trimmed its original general revenue forecast for fiscal 2021 by $205.9 million, to $5.68 billion, citing a projected recession triggered by the covid-19 pandemic. Fiscal 2021 ends June 30.

Hutchinson said his proposed budget funds the state's priorities, such as education and the crisis stabilization units for the mentally ill, and "allows room for another round of tax cuts."

During the covid-19 pandemic, "we have worked together to tighten the belt of state government," he said in remarks to the Legislative Council and Joint Budget Committee over Zoom. "We have reduced spending in the past year, and we have focused on the core critical areas of education, public safety and our health care infrastructure that was essential during this pandemic.

"As a result, we are entering the next year in sound financial condition. We have accumulated a $240 million surplus from last year, and our current year is running a surplus as well."

The governor said he appreciated the Legislature's work to increase the safety net for Arkansans who are struggling because of layoffs and financial challenges.

"In terms of the future, we are in a position to absorb the tax cuts that are already scheduled for next year," Hutchinson said. "We have reduced the individual income tax rate to 5.9% beginning next January."

The governor said his proposed budget for fiscal 2022 restores funding cuts in areas such as colleges and universities, Department of Health, the Military Department, county jail reimbursement and the Crime Laboratory.

Hutchinson also touted savings from his government reorganization plan that was approved by the Legislature last year.

Hutchinson proposed reducing the state's top individual income tax rate for new Arkansas residents to 4.9% for five years, with a projected cost of $1.5 million in fiscal 2022.

The governor said reducing the top individual income tax rate to 4.9% for new residents in Arkansas for five years would help recruit talent for the state's growing tech industry and manufacturing from large urban areas while also attracting retirees to the state.

"The goal is to reduce the rate for all Arkansans to 4.9% over the next five years, and so as we lower it for new residents of Arkansas for five years, we also are setting the goal and saying we are going to do this same for all Arkansans, and so we have a goal to work toward. This is not designed to prioritize new residents. It is a plan to get everyone to 4.9% more quickly throughout continued economic growth," he said.

A state finance department revenue impact projects that a tax rate reduction from 5.9% to 4.9% over a five-year period, beginning in 2023, would cause an overall reduction in state general revenue of $275.6 million a year when fully implemented, said Scott Hardin, a spokesman for the department.

This proposal "also reduces the incentive to game the system," Hutchinson said. It is projected to reduce state tax revenue by $13.5 million a year.

He proposed transferring $100 million of that surplus to the state's long-term reserve fund, which he said has grown from zero to the current balance of $185 million under his governorship.

"With my budget today, I will be presenting a plan that will see that balance rise to at least $425 million by the end of the biennium," Hutchinson wrote in a letter dated Tuesday to Legislative Council co-Chairs Sen. Cecile Bledsoe, R-Rogers, and Rep. Jeff Wardlaw, R-Hermitage.

Hutchinson said the state's long-term reserve fund will be a cushion against the uncertainty of the future.

"I know this session there will be debate over tax cuts from many different variations being proposed by various members," the governor said. "Under the proposed budget, $25 million is allocated from a surplus to fund tax cuts. This will allow for a $50 million tax fund in total, with the first year of the biennium covered by the tax cut."

Hutchinson said his recommendation is to provide $50 million for low- and middle-income tax cuts, and "this will set the stage for reducing our tax rate further when the economy allows."

Rep. Lane Jean, R-Magnolia, who is a co-chairman of the Joint Budget Committee, asked Department of Finance and Administration Secretary Larry Walther about the specifics of the governor's recommendation for $50 million in individual income tax cuts.

Walther said, "I think we are leaving that open for a broad discussion with the Legislature."

Hutchinson said his proposal leaves $13.5 million of the state's $240.9 million surplus as an unobligated balance, "which gives us some room to work during the course of the session."

Sen. Joyce Elliott, D-Little Rock, asked state Department of Finance and Administration officials about the evidence that cutting the top individual income tax rate to 4.9% for new residents will lure people to the state.

"Generally speaking, tax cuts do not do what we have told people they do for all these years, but we keep on doing it," she said.

Walther, the finance secretary, said the governor is setting the goal of reducing the top individual income tax rate to 4.9%, "so what we are doing is establishing as a mark to allow new residents of Arkansas to have the benefit of that early before everyone else gets it," hopefully within five years.

"We believe that a way of encouraging people to consider Arkansas is a tax reduction," he said. "Obviously, there are no guarantees. One might say that the more money you have in your pocket, the better your quality of life can be wherever you are, including Arkansas."

Elliott countered that "there is no research that backs that up that premise."

As far as the 4.9% income tax rate for new residents in Arkansas, Rep. Les Eaves, R-Searcy, told state budget director Jake Bleed that "I am with you on what we are trying to do, grow the state, get more people to move here."

"What do we tell people that are already here, the people that have had businesses for 50 years are going to be paying the higher rate for that five-year period that maybe somebody who has just moved in is paying the lower rate?" Eaves asked.

Bleed said that "one of the reasons we are doing this is to really set that bookmark, that place marker to say 4.9[%] is the direction we are heading, and it is a commitment on our level to continue to pursue that even though this year maybe the budget doesn't allow it."

"But we want to continue to pursue it and maintain that momentum towards that top marginal rate down to 4.9[%] for everyone," he said.

The governor's proposed budget would increase the funded general revenue budget for the public school fund by $30.5 million, to $2.53 billion in fiscal 2022. Bleed said that would be supplemented by $80 million currently in the fund.

The governor also proposed increasing the general revenue budget for the Department of Human Services by $82.3 million, to $1.79 billion in fiscal 2022, including a $75.2 million increase, to $1.38 billion, for the state's Medicaid program.

Senate Democratic leader Keith Ingram asked state officials what their plan is if the U.S. Supreme Court overturns the federal Patient Protection and Affordable Care Act, and about the impact on the state's budget. The state operates the Arkansas Works Medicaid expansion program through waivers under the federal law. The program provides health insurance to about 290,000 low-income people.

Bleed said that scenario would likely have to be addressed with legislation next year.

Cindy Gillespie, secretary of the state Department of Human Services, made an initial estimate to lawmakers and then later clarified her testimony.

Department spokeswoman Amy Webb said Gillespie indicated that Arkansas Works is budgeted at $1.945 billion in federal and state funds and that "all of that, minus the $194.5 million in state share, would go away."

She said that Department of Human Services officials estimate it would cost about $225 million in state matching funds to shift the portion of the Arkansas Works program that would still be eligible for traditional Medicaid to that program, and "we could use the $194.5 million but would need additional to cover those," and also lose $17.9 million in premium tax revenue.

Gillespie said she believes the U.S. Supreme Court would give states time to make adjustments if it made a sweeping ruling.

"We would have some time to think through all of the implications because it is much more than the expansion population," Gillespie said.