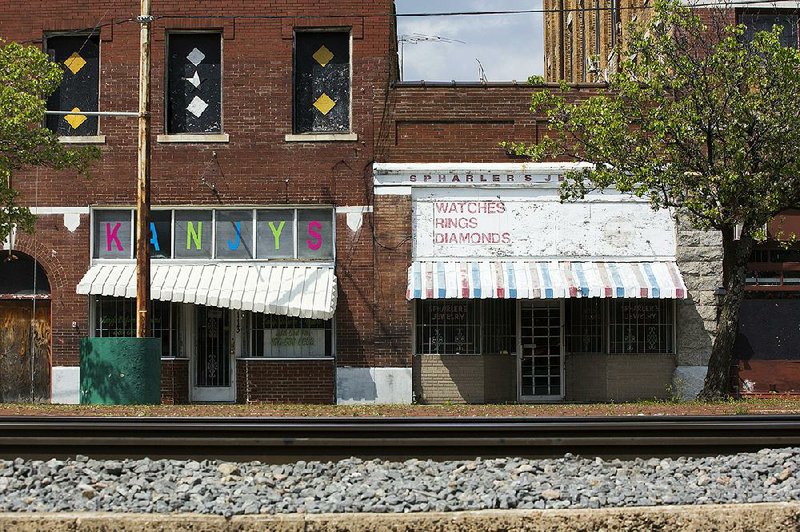 A property sits abandoned on Fourth and Main streets in Pine Bluff.

A proposed amended ordinance that would help streamline the city's procedure for addressing blighted properties passed muster with the Development and Planning Committee and is now on its way to the full City Council for consideration.

The amended ordinance, presented by Urban Renewal Agency Director Maurice Taggart, would place a 15-day window between the time the City Council orders abatement of nuisance properties and the time the city may, at its discretion, take action.

"As we started with remediation of blight within the urban renewal area," Taggart said, explaining the background of how the amendments came about, "one of the things I noticed after doing some research and visiting with folks is that there are some, as it relates to condemnations, the time is pretty lengthy. Currently, if everything works out with no issues, there's no objections from the homeowner, from the time a house is inspected to the time that a house is ready for demolition is 111 days."

Taggart said he looked at how other cities were handling such properties and came to the conclusion that the time from inspection to condemnation could be shortened.

After speaking with officials at the city's Code Enforcement Department, Taggart said it was decided one measure to shorten the time it takes to deal with such structures would be to put a hard cutoff deadline into the city statute as a way of compelling the city to act.

"What it does is it reduces the amount of time to have a house torn down from 30 days to 15 days," Taggart explained.

"Essentially, what you're doing is taking 15 days off of the 111, or it could potentially be 130 plus days, depending on if they've been given some additional time by the city to remediate the nuisance and bring it up to code."

Taggart said he had visited with representatives from neighborhoods and said the general consensus is that residents do want concrete steps forward to be taken to reduce the amount of blight.

"I would love that 111 days to be reduced significantly less," he said. "However, I think this is a step in the right direction."

An additional subsection was added to the proposal to help the city deal with burned-out structures that currently dot the landscape throughout the city, depressing property values and encouraging criminal activity, which would give the owner of any property that has sustained damage exceeding 50% of the cost of repair or restoration 15 days to raze and remove the structure.

After 15 days, the amended passage said, "the City of Pine Bluff may cause the immediate razing and removal of the structure."

"I talked to the fire chief about the best way to deal with the plethora of burned-out properties that are throughout the city," Taggart said.

"As you know, they are everywhere, and during our conversation he told me there are a hundred of them and they add an additional 30 a year."

Taggart reiterated that the structures referred to as "burnouts" are indeed heavily damaged by fire.

"We're not talking about minimal burning; we're talking about a significant amount of burn," he said. "What it does is, it gives the city, in this case the director of Code Enforcement, the discretion to determine whether that property should come down immediately or not."

Taggart said that in cases involving insurance payments, some leeway should be given to allow that process to proceed. For that reason as well as to avoid placing an obligation on the city that it may not be able to afford within a short time frame, the proposal included the word "may" rather than "shall" on the amended portion of the ordinance.

Council Member Glen Brown Jr., chairman of the committee, said he had read the ordinance and had no issues with it.

"I think it's a good thing that we're trying to be proactive in ridding the city of these structures and to also give some leeway to property owners going back and forth with their insurance," Brown said.

"I know that process can be a little bit lengthy depending on the insurance company. I think this puts us in a good place."

"I do, too," commented Alderman Win Trafford. "And I don't think it will be an issue with the insurance because we'll know the people trying to get through that process with their insurance company. They'll all have some proof to show us they're dealing with them."