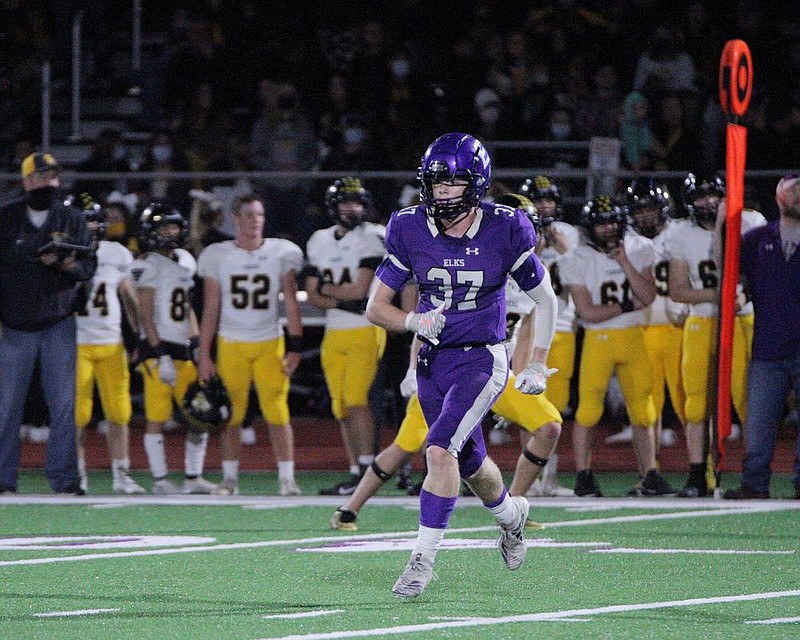 Senior Trevor Shumate rarely leaves the field for Elkins, playing receiver, running back and linebacker. He also handles all the kicking duties for the Elks. (Special to the NWA Democrat-Gazette/Brent Soule)

ELKINS -- Trevor Shumate doesn't have the eye-popping statistics that attract college recruiters, but he does have talent and an attitude every coach covets.

Shumate appears all over the field as a receiver, running back, linebacker and the player who handles all the kicking for Elkins (7-2), which finished third in the 4A-1 Conference behind Shiloh Christian and Prairie Grove. Elkins will host a first-round playoff game Nov. 20 against the winner of Friday'sgame between Green Forest and Bald Knob.

Shumate is an all-around athlete who also plays baseball and competes in track and field, where he won the 60-meter hurdles at the state indoor track meet in Fayetteville last year. He's put together a standout senior season in football with 26 catches for 609 yards receiving; 265 yards rushing on 38 carries; and 45 tackles with 4 interceptions on defense.

"[Shumate] is definitely a very dynamic athlete," Gentry Coach Justin Bigham said. "You have to know where he is on every play."

Elkins opened the season with six consecutive wins before losing 49-28 to Shiloh Christian, which is ranked No. 1 in Class 4A. Elkins controlled the first half before the Saints unleashed their running game to pull away for the win.

Elkins fought hard against Prairie Grove last week, but fell 28-20 in the battle for second place in the conference. Shumate caught a 35-yard pass from Kain Johnson for a touchdown. He also made 11 tackles, including a sack, and recovered a fumble in the end zone for a touchdown.

"[Shumate] is one heck of a football player," Elkins Coach Bryan Hutson said. "Running back, receiver, on defense at linebacker or safety, he does it all for us. We were out here the other day at practice when it was so windy, and Trevor literally kicked a 65-yard field goal."

While recruiters have been slow to take notice of Shumate, he turned some heads during a playoff game last season at Warren -- a small-school power that's sent plenty of players onto the Division I level. Elkins lost the game 34-19 but Warren Coach Bo Hembree and others were complimentary of Shumate, who ran for 82 yards and caught 7 passes for 104 yards.

"The Warren coaches came up to me afterward and said, 'That guy can play,' " Hutson said. "They loved the fact he plays so hard."

Shumate was focused on the game, but he did notice a former Warren and current University of Arkansas star watching nearby.

"Treylon Burks was actually on the sidelines for that game," Shumate said. "It was pretty fun to get to play in front of those guys from Warren. I gave it my all."

Shumate will have an opportunity to display his talent more in this year's playoffs. He's hopeful Elkins can go far, and he's thankful for the opportunity to play his senior year when so much was in doubt because of the coronavirus pandemic.

"For a while there, I didn't think we were going to play at all," Shumate said. "I'm just happy we made it this far to where we get to be in the playoffs."

Winner to play Des Arc in second round

Winner to play Gurdon in second round