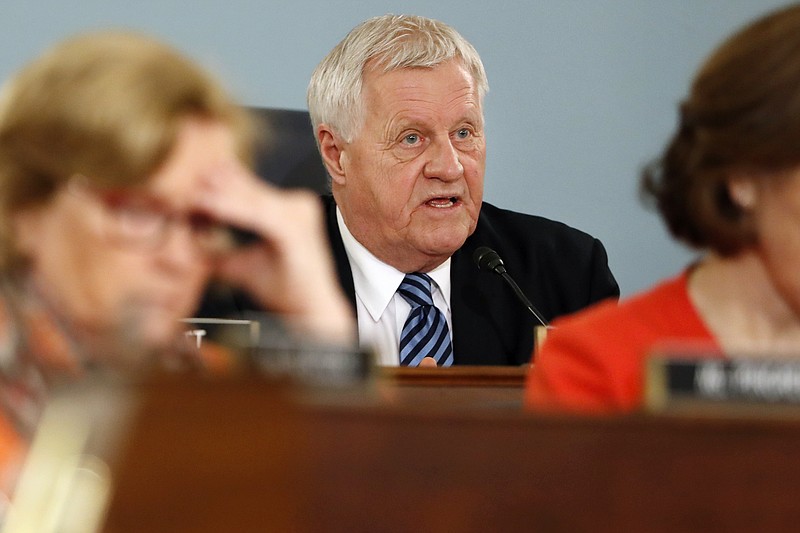 FILE - In this Feb. 27, 2019, file photo, House Agriculture Committee Chairman Rep. Collin Peterson, D-Minn., asks a question on Capitol Hill in Washington. The reelection defeat of Peterson in Minnesota and some key retirements mean a shakeup is coming for the industry on Capitol Hill, with power likely to shift from the Midwest to the South and the coasts. Both the House and Senate agriculture committees will get new chairs, and there will be a new top Republican on the House panel. (AP Photo/Jacquelyn Martin, File)

MINNEAPOLIS -- The reelection defeat of U.S. House Agriculture Committee Chairman Collin Peterson in Minnesota and some key retirements mean a shake-up is coming for the industry on Capitol Hill, with power likely to shift from the Midwest to the South and the coasts.

Both the House and Senate agriculture committees will get new leaders, and there will be a new top Republican on the House panel. Observers say the most likely replacements are expected to prioritize Southern crops such as peanuts, rice and cotton over traditional Midwest concerns of corn, soybeans, sugar beets and dairy. That could mean a new emphasis on nutrition programs that serve the poor.

Sen. John Boozman, R-Ark., is expected to become the next chairman of the Senate committee, replacing Sen. Pat Roberts of Kansas if the GOP retains control there.

Peterson, a Democrat who lost his bid for a 16th term, was a major force in shaping several farm bills and a strong advocate for Midwestern agriculture in a House where the ranks of rural Democrats have been shrinking. He was known for working across the aisle, and he had Speaker Nancy Pelosi's ear.

"I don't think you can in any way exaggerate the magnitude of the loss for agriculture," said former U.S. Sen. Heidi Heitkamp, a North Dakota Democrat whose name is in the mix as a potential agriculture secretary in an administration headed by Joe Biden. It will be hard to replace his institutional knowledge and his ability to win over liberals to deliver farm bills that work for Midwest agriculture, she said.

Peterson lost to Republican Michelle Fischbach, a former lieutenant governor and state senator. Fischbach plans to seek a seat on the Agriculture Committee, but she'll have to draw heavily on her legislative skills to have much of an influence as a freshman in the minority party.

Peterson didn't respond to an interview request about his plans; his spokeswoman said he was out deer hunting. But his name has been discussed within the farm policy world as a potential appointee to a ranking post in the U.S. Department of Agriculture, maybe even as secretary.

"He was somebody who understood the details and minutiae of agricultural policy probably better than anyone in the country," former U.S. Agriculture Secretary Tom Vilsack said. "He was a skilled negotiator, which you need to have to get farm bills through the process."

Vilsack, a Democratic former governor of Iowa, said Peterson's departure will be "particularly difficult" for the sugar, biofuels and dairy industries.

Sen. Debbie Stabenow, D-Mich., is the only one of the top four agriculture committee leaders returning in 2021. Neither Roberts nor Rep. Michael Conaway of Texas, the ranking Republican in the House committee, sought reelection.

Peterson's loss wasn't a total surprise, given that his district has become much more Republican over the past decade. Agricultural interests spent heavily to try to keep him in power.

Kevin Paap, president of the Minnesota Farm Bureau, said the contest remains "the most talked about political race to anybody involved in agriculture." The departures of Peterson, Roberts and Conaway will cost the agriculture committees 85 years of collective farm policy experience, he said.

The two most senior Democrats on the House panel, Reps. David Scott of Georgia and Jim Costa of California, both said last week that they're running for the chairmanship. Rep. Marcia Fudge of Ohio, who has also been discussed as a potential agriculture secretary, has not publicly said whether she was interested in leading the committee. She champions nutrition programs and represents a mostly Black district that includes parts of Cleveland and Akron.

Costa, who represents California farm country, and Scott, who represents part of Atlanta and several suburbs, indicated that they would emphasize the nutrition programs that fall under the committee's purview, including the Supplemental Nutrition Assistance Program (SNAP), formerly known as food stamps; the Women, Infants and Children program; and the National School Lunch Program.

They had less to say in their pitches to colleagues about crop subsidy and insurance programs that more directly affect farmers -- an indicator of the changing priorities among House Democrats.

Former U.S. Sen. Joe Donnelly, a Democrat from Indiana who served on the Senate committee, said both Scott and Costa have deep agricultural policy backgrounds and would be "strong advocates for farm country." Their current emphasis on nutrition is because they'll need votes from urban lawmakers to get elected chairman, he said.

While the leadership implications are important, crucial issues won't change, said Craig Cox, senior vice president for agriculture and natural resources at the Environmental Working Group, which is critical of federal farm policy, contending that current subsidy and other programs foster unsustainable practices.

Topping the list, he said, is "the urgent need to really take a hard look at crop subsidies and crop insurance," and what those programs cost taxpayers. Other priorities should include addressing Black farmers' claims of unjust treatment, the contamination of ground and surface water from fertilizer and manure, and agriculture's role in the climate crisis.

"The issues are issues regardless of who is occupying that chair," Cox said.