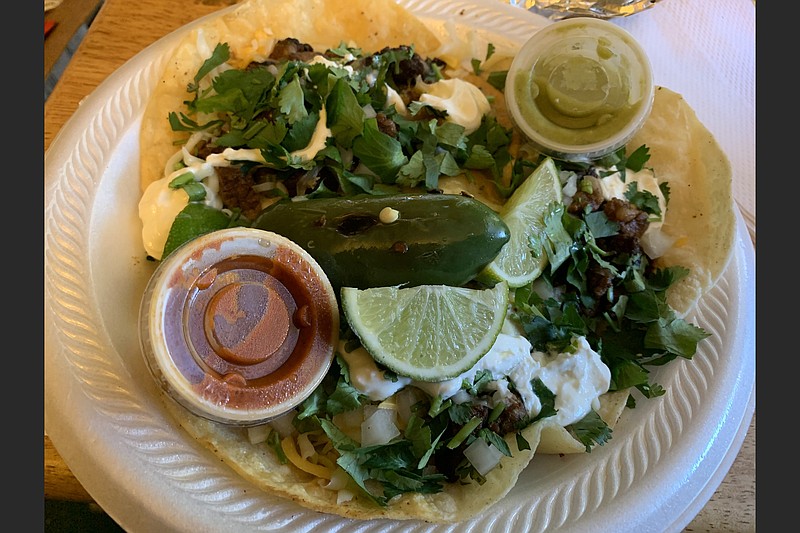 With apologies to Taylor Swift (hey, it isn't easy coming up with a new take on takeout lyrics every seven days), we're take, take, taking it out again this week, from tacos to turkey and steak to cheesecake. The usual caveats: We're sticking to, or close to, a radius that hopefully results in food staying hot 'til we get it home. We pay for all meals up front.

WHAT WE GOT: Three carne asada tacos ($6)

HOW IT WENT: Simmons Bank Arena has augmented its food-to-go operation with a Friday food truck assembly on the lot just to its south, normally used for VIP parking for arena events. Four or five trucks, different ones each week, park at a social distance from one another and customers have been lining up for the goodies. That includes what we got, Mexican street tacos with the addition of shredded cheese and sour cream. Since they were out of al pastor (that's marinated pork chunks), we chose carne asada (marinated steak) and were sufficiently satisfied — a large quantity of stuff layered onto corn tortillas. The price per taco decreases according to the number of tacos you get — three at $2 apiece was a pretty good bargain. The menu also offers burritos and quesadillas.

HOW IT'S GOING: There was a line but the little mobile kitchen churned out orders fairly quickly — we had less than a 10-minute wait. 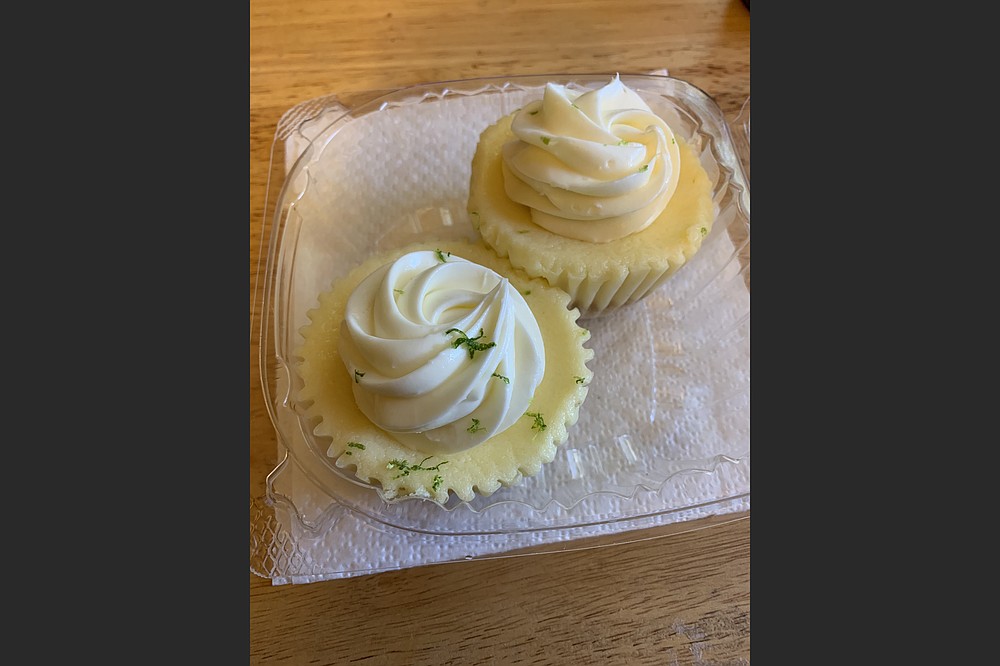 WHAT WE GOT: Two Key lime cheesecake cupcakes ($6)

The main offering on this occasion was a variety of flavors of cheesecake cupcakes; we settled on the Key lime and were happy that we did: Sitting on a graham cracker crust, the cheesecake was just the right balance between sweet and tart and the consistency was nearly perfect.

HOW IT WENT: This was easily the most popular truck on the lot Friday. People ordered at one window and orders came out of a second window, with a young man shouting out the order numbers as the finished packages emerged. We ordered and got a number — 25 — and realized that given the fairly large number of those standing around outside the truck, we'd be in for a wait, especially after the first order the man called out thereafter was "13." Orders were being processed fairly quickly, but given the volume, all in all, we leaned on the truck for support for about 20 minutes. Doing this again, we'd switch the order of how we ordered and stand in line for the cheesecake first — it was just this side of frozen and would have stayed cold for an extended period of time — and gotten the tacos, which were still delicious when we got them home but had cooled down a bit by then, subsequently. Or even better: We would have eaten the tacos at one of the tables set up around the edges of the lot, and then gone home for the cheesecake.

HOW IT'S GOING: Did we mention that there were at least a dozen customers ahead of us waiting for their orders? By the way, the food truck is an offshoot of Little Rock's Cinnalightful, which among other things makes gourmet cheesecakes for "Food Distributors, Restaurants and other food establishments." You'll usually find the truck parked, Thursday through Saturday, at 9820 W. Markham St. in Little Rock, but we're glad they ventured across the river for the arena's food-truck Friday. 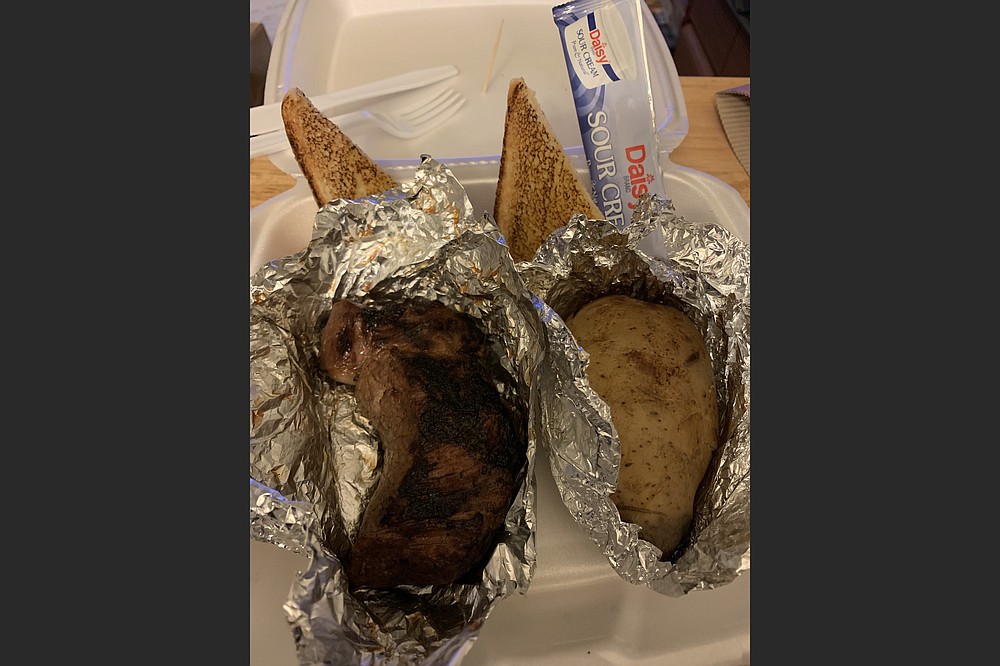 Things have been hopping at Black Angus since it reopened on its former lot spot on West Markham Street; we got a 6-ounce top sirloin and a baked potato with butter and sour cream. (Arkansas Democrat-Gazette/Eric E. Harrison)

From the moment they reopened their doors in its semi-original lot spot at the corner of West Markham and Van Buren streets catty-corner from War Memorial Stadium, Black Angus has been hopping, nonstop. Plate presentation there has always been secondary to the quality of the food, which is what Black Angus is all about, and always has been: flavorful dishes, most of them cooked on a charcoal grill. Our steak and baked potato, each individually wrapped in aluminum foil, were simply not photogenic; there was no way at all we could prop up our paper-wrapped cheeseburger for a photo that looked like anything edible. Luckily, the steak, just a shade rarer than the medium-rare we ordered, was as good a piece of beef as you'll find for the price; the baked potato was hot and undisturbed — we were happy to split it open, add butter (a generous chunk off a stick crammed into a little plastic cup) and sour cream (commercial, prepackaged) and devour. The cheeseburger gave us happy memories not only of Black Angus burgers past but a frisson of bliss recalling Minute Man burgers past (and once one opens a little closer than Jacksonville, future).

HOW IT WENT: Eschewing the long, long lines for the drive-thru, we donned a mask and entered the premises on both visits, ordering and paying at the counter. Despite being open less than two weeks in their new location, owner Karla Creasy and her employees, some of whom have been with her for decades, have things down pat — it took 10 minutes or less each time for our orders to come out of the kitchen even with the press of business.

HOW IT'S GOING: The dining room is officially not open, but there were several family groups sitting there eating their "to-go" orders. We mentioned the long lines for the drive-thru, which Creasy once said made up a third of her business when the restaurant was on North Rodney Parham Road; there were also folks picking up call-in orders and several people just ordering at the counter. 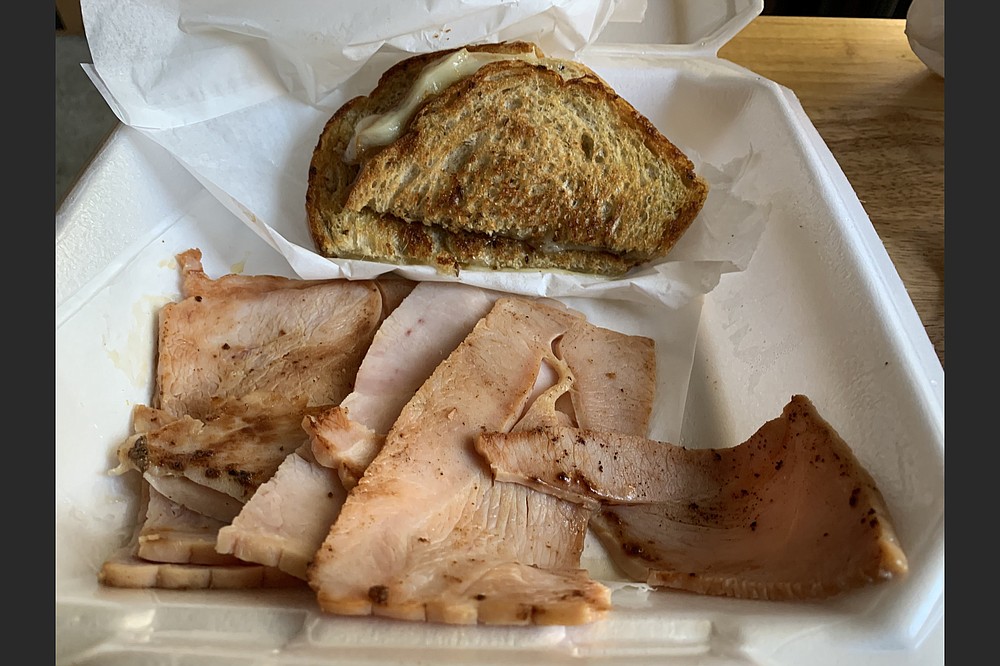 We're glad to renew our acquaintance with Burge's; we can't remember the last time we visited, but it was certainly sometime in the previous century. The basic menu has changed very little, but there's one change we definitely applaud: the smoked turkey plate, as well as its other smoked-meat plates, used to come with Texas toast; now it comes with a grilled cheese sandwich, with melted Swiss oozing out of the rye bread and sticking to the paper separating it from the turkey, so that, alas, we lost some of it. The turkey, by the way, was outstanding, if just a little dry, thin-sliced, nicely smoked, still tender, and there was plenty of it. The plate is supposed to come with barbecue beans and a choice of a yellow potato salad or coleslaw; we chose the potato salad, which was excellent, but we also got slaw, which we didn't want, and no beans.

HOW IT WENT: As long as Burge's has been around, the order process ought to be straightforward, and it was. The dining room is open, so we placed and paid for our order in person; it came out of the kitchen, slaw and all, in about 10 minutes.

HOW IT'S GOING: The place was pretty busy with dine-in customers and takeout orders during the midst of a busy Saturday lunch period.