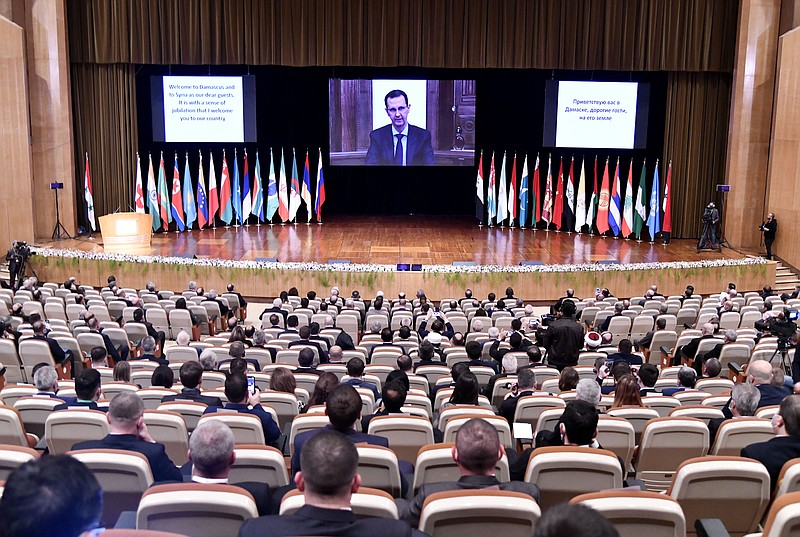 CORRECTS DATE TO NOV. 11, 2020 -- This photo released by the Syrian official news agency SANA, shows Syrian President Bashar Assad virtually addressing the opening session of a two-day international conference on the return of refugees to Syria, organized by Russia, in Damascus, Syria, Wednesday, Nov. 11, 2020. The Syrian government is working to secure the return of millions of refugees who fled war in their country, but Western sanctions are hindering the work of state institutions, complicating those plans, Assad said Wednesday. (SANA via AP)

DAMASCUS, Syria -- The Syrian government is working to secure the return of millions of refugees who fled war in their country, but Western sanctions are hindering the work of state institutions, complicating those plans, President Bashar Assad said Wednesday.

His comments came at the opening session of a Russia-organized two-day international conference in Damascus on the return of refugees. The event is being boycotted by many Arab and Western countries and has been criticized by the U.N. and the U.S. who say the time is not ripe yet for the return of refugees. They insist the first priority should be to make it safe for people to go back to the war-torn country.

Assad's forces have recaptured much of Syria, with the backing of his allies Russia and Iran, which helped tip the balance of power in his favor. But large areas remain outside government control, mainly in the north near the border with Turkey. The conflict that began with antigovernment protests in March 2011 as part of the region's Arab Spring, quickly morphed into a civil war.

Tuesday's conference was held in a giant hall with participants, most of them wearing masks, observing social distancing because of the coronavirus. Many countries were invited but only 27 agreed to participate, including neighboring Lebanon and Iraq which host large numbers of Syrian refugees, according to state TV.

Neighboring Turkey, a main backer of Syrian opposition forces, was not invited. Another neighbor, Jordan, which also hosts Syrian refugees, did not participate.

Lebanon's outgoing Foreign Minister Charbel Wehbi addressed the gathering by videoconference and used the opportunity to call on the international community to help in the return of Syrian refugees. Lebanon is hosting the highest per capita number of Syrian refugees, who at one point made up nearly a quarter of the tiny country's population of 5 million. The country is now mired in an unprecedented economic and financial crisis.

Although Wehbi spoke from Beirut, Lebanon sent a delegation to attend the conference headed by the minister of social affairs, whose ministry is in charge of dealing with Syrian refugees. Lebanese are deeply divided between supporters and opponents of Assad.

Russia Foreign Minister Sergey Lavrov, whose speech was read by the Russian president's envoy to Syria, described the sanctions as "financial strangulation" used to prevent the arrival of foreign aid and put up obstacles to prevent the return of the displaced to areas under government control.

Syria's state media quoted the head of the Russian National Defense Management Center Mikhail Mezentsev as saying that Moscow will allocate $1 billion to reconstruct Syria's electricity networks and other industries.

Syria's nine-year war has killed about half a million people, wounded more than a million and forced about 5.6 million to flee abroad as refugees, mostly to neighboring countries. Another 6 million of Syria's prewar population of 23 million have been internally displaced by the fighting.

"We are working hard for the return of every refugee who wants to come back and help rebuild the country," Assad said in a speech aired at the beginning of the conference. But, he added, there "are major obstacles -- including pressures exerted on refugees not to return and the illegitimate economic sanctions and the siege imposed by the American regime and its allies."

Assad said the European and U.S. sanctions on his government, imposed over the war, hinder rebuilding efforts and improvement of infrastructure that was damaged by the war, which doesn't help the return of refugees.

The Syrian Opposition Coalition criticized the conference, saying it cannot be organized "by the criminal who is responsible for the crime." The return of refugees can happen only after bombing of rebel-held areas stops and a political transition is achieved, the coalition added. 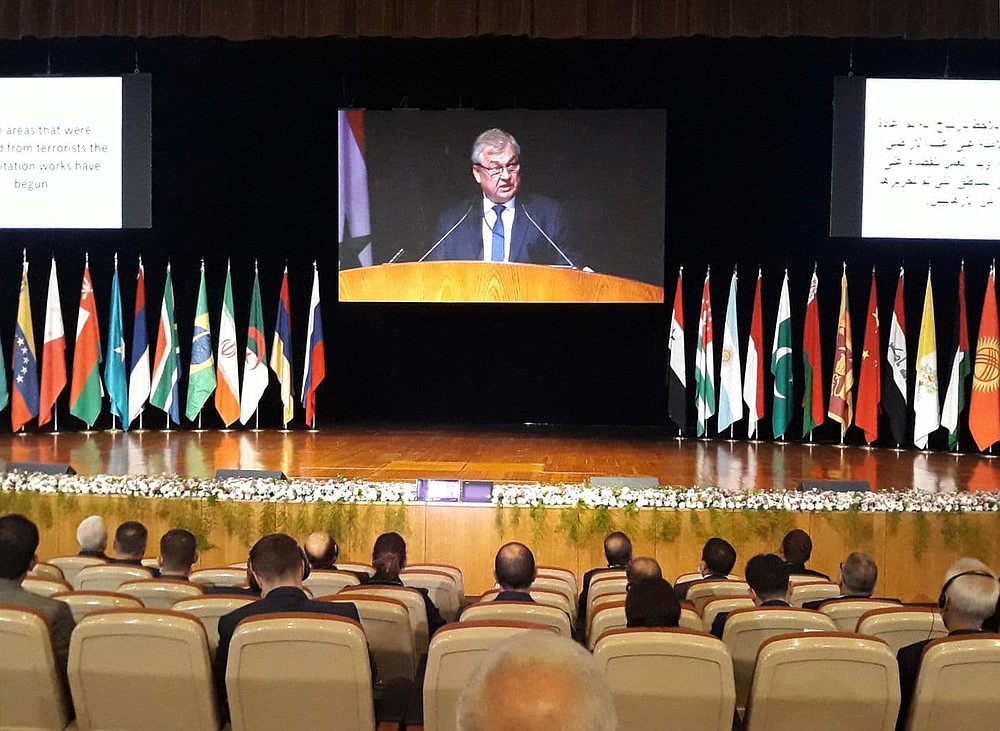 In this photo released by the Syrian official news agency SANA, the Russian President's Special Envoy for Syria Alexander Lavrentiev virtually addresses the opening session of a two-day international conference organized by Russia on the return of refugees, in Damascus, Syria, Wednesday, Nov. 11, 2020. The Syrian government is working to secure the return of millions of refugees who fled war in their country, but Western sanctions are hindering the work of state institutions, complicating those plans, President Bashar Assad said Wednesday. (SANA via AP)
ADVERTISEMENT