Numbers continue to grow as seasons slowly wind down 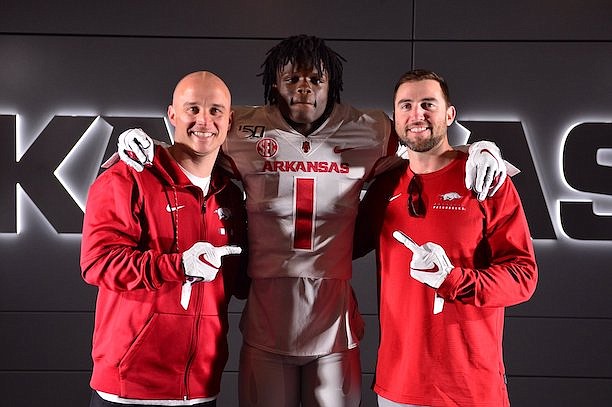 University of Arkansas commitments Ketron Jackson and Jermaine Hamilton-Jordan had huge games last week while leading their teams to victory.

Jackson, 6-2, 185 pounds, of Royse City, Texas, led the Bulldogs to a 63-31 victory over Forney by hauling in 4 receptions for 197 yards and 2 touchdowns and also having a 90 yard kickoff return for a score. He added a tackle and an interception while playing cornerback.

"We have to win two more games to get into the playoffs, at the end of the day that's when Ketron comes up the biggest," Royse City Coach David Petroff said.

Petroff said Jackson's performance is as good as he's seen.

"The three touchdowns and the interceptions return for 42 [yards], all-round that's one of the top ones," Petroff said. "I've had kids do that on one side of the ball but not all the way around. He's like a man amongst boys which is what D-I coaches want to hear when you're talking about high school games."

In five game this season, Jackson has 27 catches for 539 yards, a 19.96-yard per-catch average, and 7 touchdowns along with 4 pancake blocks.

"The week before he had seven catches for 137 yards," Petroff said. "It was a solid game, but this week he just went off and hopefully he does that again this Friday night."

Hamilton-Jordan, who's being recruited to play safety in Fayetteville, also scored three touchdowns while playing linebacker and running back last week.

He had 6 tackles and a 25-yard interception return for a score on defense and had 6 rushes for 110 yards, a touchdown and 2 catches for 36 yards and a touchdown in a 62-26 victory over Van Horn.

A jack-of-all-trades, Hamilton-Jordan has recorded 88 tackles, 9 tackles for loss, 3 sacks, a pass breakup, a recovered fumble and 2 interceptions, including the 25-yard touchdown return.

Offensively, he's rushed 28 times for 411 yards, 7 touchdowns and has 3 catches for 55 yards and a touchdown.

"As we're deeper in the playoffs and we're playing the district championship this Friday, he's going to get a whole lot more carries," Lowe said.

Hamilton-Jordan, an ESPN 3-star prospect, has proved to be an ironman this season.

"He's always playing at higher standard and higher level than anyone else," Lowe said. "High school has 48 minutes and he's probably playing 45 of those minutes. Jermaine is on our kickoff team, he's our long snapper on the punt team, he plays on our kickoff return team He starts on offense, he starts on defense. He's about as complete of a high school player you can have at this level."

"I'll be anxious to see when he gets to the college level and he can focus purely on one side of the ball how much he can develop."