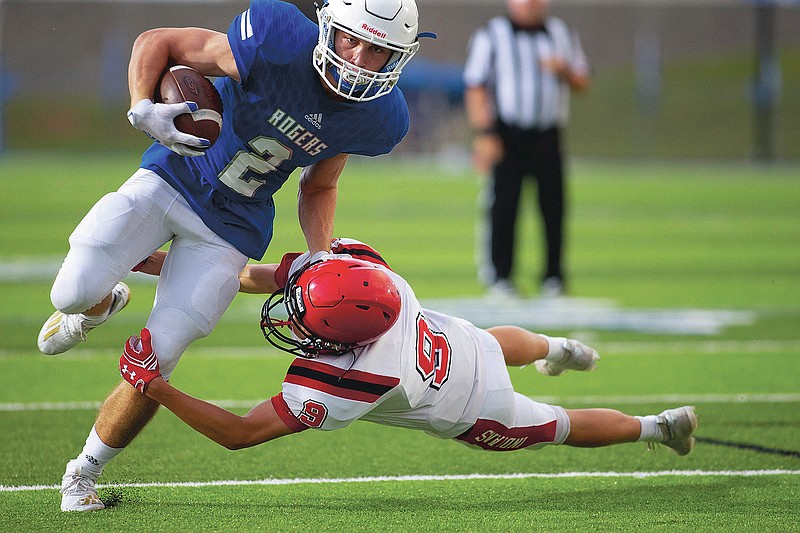 ON THE AIR The game will be live-streamed on the Rogers app.

BETWEEN THE LINES The Mounties rolled up a 49-14 lead last week against crosstown rival Rogers Heritage and coasted to the 49-28 win. ... Rogers piled up 516 yards of total offense led by quarterback Chris Francisco's 248 passing yards and 3 touchdowns. ... Josh Shephard rushed for 169 yards on just 13 carries and 3 touchdowns, while Gavin Pitts added 151 yards and 3 touchdowns on eight receptions. ,... Cabot averages 392 yards and just under 30 points per game. .. The Panthers lost three out of their last four games against the top 3 teams in the 6A-Central. The lone win was 24-7 over Fort Smith Northside. ... Cabot senior quarterback Tyler Gee has thrown for 2,315 yards and 25 touchdowns.

ON THE AIR The game will be live-streamed on the Rogers Heritage app.

BETWEEN THE LINES The Hornets have dominated 7A-Central opponents, averaging more than 50 points per game this season. ... Bryant scored 70 points twice in the last four weeks. ... Heritage scored its most points of the season in last week's 49-28 loss, but 14 of those came in the last quarter and a half.

ON THE AIR The game is live-streamed on the school web site for Fayetteville.

BETWEEN THE LINES Fayetteville has won four of its past five games after starting 0-4 on the season against tough nonconference competition. ... Junior quarterback Bladen Fike has improved steadily and enters tonight's game with 1,541 yards passing and 13 touchdowns along with six interceptions. ... Kameron Ingram leads the ground game with 628 yards rushing. ... Linebacker Kaiden Turner is a new addition to the offense and he scored on touchdown runs of 1 and 4 yards last week against Springdale Har-Ber. .... Fayetteville beat Har-Ber 33-27 to earn a No. 2 seed for the playoffs. ... Little Rock Central has played only six games because of covid-19 outbreaks that resulted in contact tracing and quarantines. ... The Tigers lost 30-7 last week to Little Rock Catholic. ... Central's top player is RT Makilian Thomas (6-3, 300), an Arkansas State commit.

ON THE AIR Game will be live-streamed on bentonvillesportsnetwork.com

BETWEEN THE LINES This is the first meeting between the two schools. ... The two schools have a common opponent this season in Little Rock Central. Catholic defeated the Tigers 30-7 last week, while West earned a 35-13 nonconference win at Little Rock. ... Catholic has won two of its last three games after starting 7A-Central play with four straight losses. ... Rockets RB Brandon Bisceglia ran for two scores, while Will Bowman and Hank Hatfield connected on a pair of touchdown passes in their win over Central. ... The Wolverines have reached the playoffs in each of their five years of existence and has always started the playoffs at home, even when they played the first three years at Bentonville's Tiger Stadium. ... West QB Dalton McDonald surpassed the 2,100-yard mark after his 217-yard performance last week against Bentonville, and WR Stephen Dyson caught 11 of those passes for 94 yards. ... The winner of this game will face the winner between North Little Rock and Fort Smith Southside.

ON THE AIR The game will be live-streamed on both school's web sites.

BETWEEN THE LINES Covid-19 issues kept these two teams from meeting on Sept. 18, but now the former 7A-West foes square-off in the first round of the Class 7A playoffs. ... Northside snapped a three-game losing streak by shutting out Little Rock Southwest 45-0 last week, returning three interceptions for touchdowns. ... Har-Ber has lost two straight games after winning four in a row prior to the final two weeks. ... Northside quarterback Dreyden Norwood, who is verbally committed to Texas A&M as a defensive back, has been nicked up and played sparingly the past two weeks. ... Har-Ber has struggled with inconsistency on offense. In a loss to Rogers, the Wildcats could not get their passing game going but ran for 300 yards. Last week Har-Ber struggled in the run game, but the passing game was clicking. ... Har-Ber sophomore RB Hudson Brewer has rushed for 1,318 yards and 15 touchdowns.

ON THE AIR The game will be live-streamed on the Springdale Public Schools web site.

BETWEEN THE LINES Springdale used a late 92-yard drive to snap a five-game losing streak with a 28-24 win against Fort Smith Southside last week. ... Conway was torched 70-33 by juggernaut Bryant last week. ... The Bulldogs have had their bright spots this season despite a 3-7 mark. Losing top playmaker LaDarius Wonsley two games into the season has been tough to overcome. ... Conway will be the most explosive team Springdale has played with the possible exception of Bentonville. The only game this season the Wampus Cats were held to 21 points or fewer was a 47-21 loss to Bentonville. Every other game Conway has scored 30 or more points. ... Wampus Cats quarterback Ben Weese is solid and has plenty of playmakers in WR Bryce Bohanon and RB Manny Smith. ... Springdale has a number of underclassmen who have emerged this season, including quarterback Landon Phipps and twins Da'Von and Ta'Jon Sparks. ... Springdale DE Andre Sparks, the older brother to Da'Von and Ta'Jon, will play at the next level.

HOOTEN'S RANKINGS Springdale is No. 12 in Class 7A; Conway is No. 4

ON THE AIR The game will be live-streamed on the Fort Smith Public Schools web site.

BETWEEN THE LINES Southside enters the game off a 28-24 loss to Springdale, while powerhouse North Little Rock rolled over Cabot 48-31. ... The Mavericks have leaned on underclassmen since mid-season, including sophomore David Sorg, who passed for a pair of touchdowns last week. ... North Little Rock's only loss came to No. 1 Bryant. ... Charging Wildcats senior quarterback Kareame Cotton has started for three seasons and is one of the top signal-callers in the state. ... Cotton was 12 of 19 passing for 190 yards and ran for 57 yards in the win against Cabot. ... NLR running back Fredrick O'Donald ran for 114 yards and two scores last week.

HOOTEN'S RANKINGS Southside is No. 13 in Class 7A; Noth Little Rock is No. 3

ON THE AIR The game will be live-streamed on GreenwoodDogPound.com.

BETWEEN THE LINES Greenwood rallied last week on the road to defeat Lake Hamilton and claim the 6A-West Conference title and complete an undefeated regular season. ... The Bulldogs defeated the Blue Devils 45-14 in the 2017 state semifinals in the only other meeting between the two teams. ... West Memphis will try to prevent its first nine-loss season since at least 1956. ... Hunter Wilkinson rushed for 204 yards, including 151 in the second half, and two TDs to help Greenwood rally and remain undefeated last week. ... Quarterback L.D. Richmond ran for a touchdown and threw for one and accounted for 177 yards of total offense for the Bulldogs.

HOOTEN'S RANKINGS West Memphis is ranked No. 15 in Class 6A; Greenwood is No. 1.

ON THE AIR The game will be live-streamed on the Van Buren Public Schools web site.

BETWEEN THE LINES The Pointers are reeling after taking three big losses to the top three teams in the 6A-West and five straight losses overall. ... Jonesboro returned three interceptions for touchdowns in last week's 42-14 win against Marion. ... Despite the five consecutive losses, the Pointers are capable of a first-round upset because of their explosive offense. Van Buren put up 53 points last week in a 60-53 loss to Benton. ... Jonesboro is also an explosive offensive team. ... Hurricane quarterback Rykar Acebo was 7 of 12 passing for 171 yards and two scores last week. ... WR Connor Clark had 3 catches for 122 yards and also ran for a score. ... Van Buren quarterback Gary Phillips was 24 of 42 for 474 yards and 6 touchdowns, with the Henry brothers Jaiden (6-212) and Chi (7-117) combining for 13 catches and 329 yards. ... Hurrican LB Marco Avant has verbally committed to the University of Arkansas.

ON THE AIR The game will be lived-streamed through Siloam Springs' athletics website siloamspringsathletics.com.

BETWEEN THE LINES Siloam Springs snapped a five-game losing streak last Friday with a 50-47 come-from-behind victory at Russellville. ... The Panthers trailed the Cyclones 28-7 in the first quarter and didn't take the lead until with 41 seconds left in the game. ... Siloam Springs finished with 581 yards of total offense against the Cyclones, including 325 yards rushing. ... Running back Jeff Phizema carried 19 times for 205 yards and three touchdowns. ... Quarterback Hunter Talley completed 11 of 24 passes for 256 yards and two touchdowns while rushing 23 times for 86 yards and two scores. Wide recievers Gavin Henson (5 receptions, 150 yards) and Keegan Soucie (3 receptions, 79 yards) also had big nights offensively. ... Christian Ledeker forced and recovered a fumble on the final kickoff to seal the Panthers' victory. ... El Dorado started the season 0-3 with losses to Cabot, Camden Fairview and Magnolia. ... The Wildcats then had two conference games against Jonesboro and Pine Bluff canceled. ... El Dorado senior quarterback Eli Sheperd has passed for 1,350 yards and 12 touchdowns, while junior Sharmon Rester gives the Wildcats a change of pace at the position with 297 rushing yards. ... El Dorado sophomore wide receiver Deandra Burns has 56 catches for 755 yards and nine touchdowns and was recently offered a scholarship by the University of Arkansas.