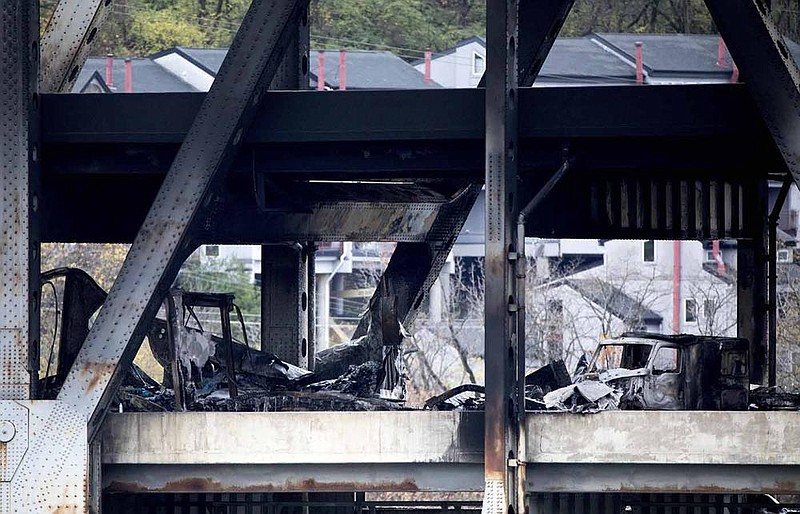 CINCINNATI -- Repairs to a bridge linking Ohio and Kentucky that was damaged by a fiery truck crash will take weeks, Kentucky's transportation secretary confirmed Thursday.

Inspectors examined the Brent Spence Bridge, which connects Interstates 71 and 75 across the Ohio River, to assess damage after workers cleared away debris and the bridge had cooled from the extreme heat caused by the crash Wednesday.

Officials don't yet know the extent of damage, but Kentucky Transportation Secretary Jim Gray said: "We know that under the best case, we have repairs that will take weeks to execute."

The bridge's closure has caused detours along a major transportation artery connecting downtown Cincinnati with northern Kentucky across the Ohio River.

The span carries about 160,000 vehicles a day, Kentucky officials said.

Kentucky Gov. Andy Beshear said the crash occurred around 2:45 a.m. Wednesday, apparently when a truck jackknifed on the bridge and was struck by another truck hauling potassium hydroxide. No injuries were reported. The crash sparked the fire, with 400 gallons of diesel fuel as the main cause, officials said. An undetermined amount of diesel fuel spilled and burned.

COLUMBUS, Ohio -- A medical researcher and professor who had been working most recently at Ohio State University pleaded guilty Thursday to a charge stemming from what prosecutors called a sophisticated scheme to transfer U.S.-backed research to China.

Song Guo Zheng, 58, and his research groups secured more than $4.3 million in grants from the National Institutes of Health for projects while receiving overlapping funding from the National Natural Science Foundation of China, according to a criminal complaint unsealed this year.

Federal agents arrested Zheng in Alaska in May as, they said, he was attempting to board a private flight headed to China. Zheng faces as many as five years in prison.

Before moving to Ohio, Zheng worked at the University of Southern California and Penn State University, according to the government.

DALLAS -- Dallas rapper Mo3 was shot and killed during a daytime attack on a highway in the city, authorities said.

The 28-year-old performer, whose real name was Melvin Noble, was stopped on Interstate 35 in south Dallas on Wednesday when a man in a dark-colored car drove up to him, police said. The man got out of his car with a gun in his hand and walked up to Noble's vehicle.

Noble got out of his car and began running south on the freeway. The gunman gave chase and began shooting, hitting Noble and a bystander who was sitting in his car, police said. Both men were taken to a hospital and the bystander is expected to survive.

Police said they don't know why the man attacked Noble. He remains at large.

Noble had more than 800,000 followers on his Instagram page and was best known for a 2019 remix of the song "Errybody," with Baton Rouge rapper Boosie Badazz.

WINSTON-SALEM, N.C. -- Three people are dead and two more, including a child, are missing after floodwaters from a river overtook recreational vehicles at a North Carolina campsite Thursday, an official said.

In addition to the three deaths at the Hiddenite Family Campground in Alexander County, a motorist was killed in the county while traveling on a road washed out by rising water, said Doug Gillespie, county director of public services.

[Video not showing up above? Click here to watch » https://www.youtube.com/watch?v=U4e4TnFs4eE]

"We've had approximately 50 roads across the county [that] have been compromised. Four bridges have been washed away," Gillespie said.

According to Gillespie, the floodwaters either covered or swept away the recreational vehicles at the campground, which is next to the South Yadkin River and is home for many of the people caught in the flood.

Swift water rescue personnel and local fire departments saved 31 people from their vehicles, some of them hanging onto their campers, according to Gillespie. He said three people were taken to the hospital for treatment.

Of the two people still missing, one of them was a child about a year old, Gillespie said.

National Weather Service meteorologist Nick Tatro said the rain was the result of a band of tropical moisture moving up ahead of Tropical Storm Eta in the southeast and interacting with a cold front moving across the Carolinas. 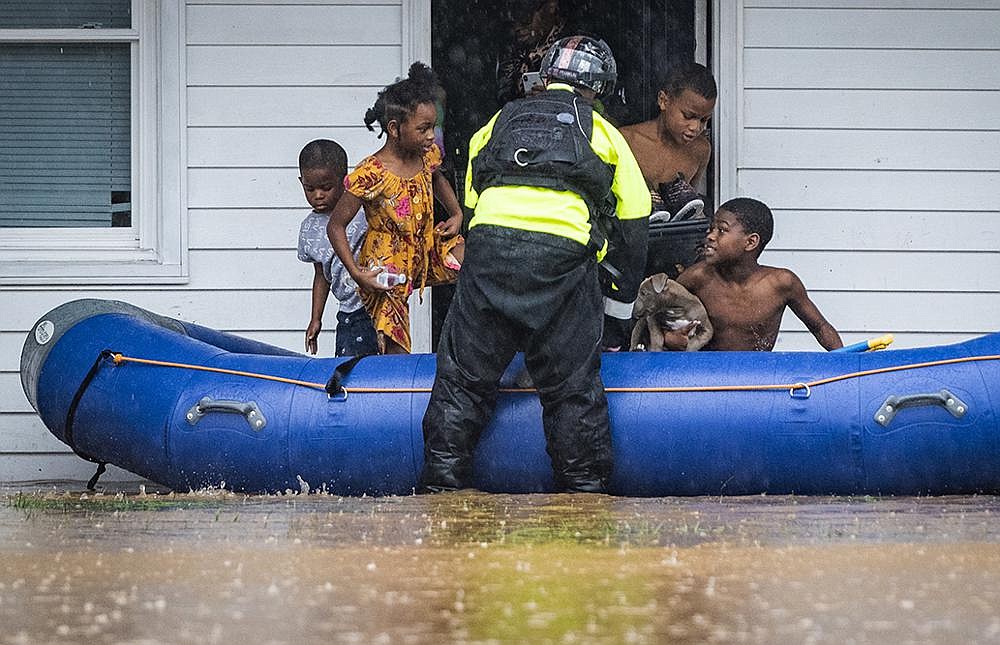 A firefighter from the Winston-Salem, N.C., Fire Department helps children into a raft Thursday at an apartment complex that was flooded by heavy rain moving ahead of Tropical Storm Eta. At a nearby campground, three people were killed and two more were missing when the South Yadkin River flooded. More photos at arkansasonline.com/1113nc/. Video at arkansasonline.com/1113flooding/. (AP/The Winston-Salem Journal/Andrew Dye)
ADVERTISEMENT