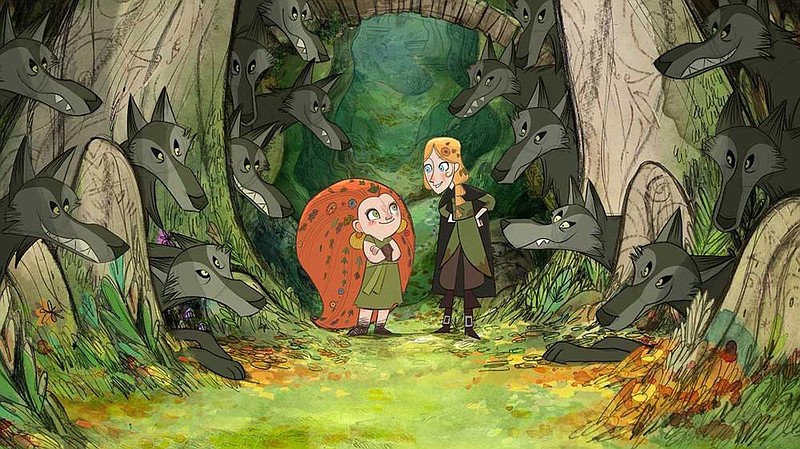 Feral wolfgirl Mebh (voiced by Eva Whittaker) affects a change of heart in hunter Robyn Goodfellowe (voiced by Honor Kneafsey), who has traveled from England to Kilkenny to wipe out the last surviving wolfpack in the animated “Wolfwalkers,” which our critic says may be the year’s best film.

It's not often in my reviews that I open with direct praise for a film. Usually, I have a few paragraphs with an anecdote or write about other movies related to the film I'm reviewing. Not so, today. "Wolfwalkers" is the best movie I've seen so far this year. And it will probably stay that way.

I'm definitely biased. But this is the section of the newspaper where writers give their opinions on film, so that's OK. Philip Martin knows what I'm about.

For the rest of you, here's what I'm about: wolves. Anything related to wolves, I love. I grew up loving these majestic and terrifying hunters from when I was old enough to read "Julie of the Wolves" and its two sequels (which I desperately want adapted to film). Traditional 2D animation. And, the cherry on top, music from Norwegian singer and songwriter Aurora.

"Wolfwalkers" checks all those boxes, and it bothers me greatly that more people aren't talking about it. Seriously, I heard about the Netflix animated series "Blood of Zeus" before I knew about "Wolfwalkers." That ain't cool. ("Blood of Zeus" was pretty cool, though).

Prior to "Wolfwalkers," my favorite movie of 2020 was "The Old Guard," but again, I like movies about immortals.

This new movie, from Irish animation studio Cartoon Saloon, and Luxembourg studio Mélusine Productions, follows a huntsman father and daughter who move to Ireland to kill the last wolf pack.

I don't remember seeing an exact date for when this movie was set, but given that Oliver Cromwell is the movie's villain, and the story takes place in Kilkenny after it had surrendered to the British, it has to take place between 1650 and Cromwell's first death in 1658. (You will remember that, three years after Cromwell died -- probably of malaria -- his corpse was exhumed, tried and subjected to a couple of posthumous executions.)

The father in this movie, Bill Goodfellowe, is voiced by Sean Bean, and surprisingly, he doesn't die in this movie, which is a rarity. The story focuses on two girls. One is Goodfellowe's daughter, Robyn (Honor Kneafsey), and the other is a wild redhead wolf girl named Mebh (Eva Whittaker).

Goodfellowe is charged with wiping out the wolves in a nearby forest because ignorant townspeople are afraid of them, and Cromwell has this obsession with making all "rebellious" things submit to his alleged God-given English authority.

Robyn follows her father into the forest on a hunting trip against his wishes, and while there, she meets Mebh, this ball of red hair and wild wolf energy. Mebh frees Robyn from a trap but accidentally bites her in the process, turning her into a "wolfwalker," which sounds like the coolest thing ever.

By day, wolfwalkers are normal people, but when they sleep, their spirit exits the body and turns into a wolf. Along with this amazing ability, wolfwalkers can also heal wounds and control wild wolves by howling. Who wouldn't want to be a wolfwalker? (Cat people, I'm guessing.)

The Celtic magic and wolves are what first captured my attention about the film. I've been reading this six-part book series this year called "Deadtown," by Nancy Holzner, that follows a Celtic shapeshifter and focuses heavily on Welsh mythology. Everyone loves to talk about Greek and Norse mythology, but I'm a sucker for the Celtic legends. Let's talk about faeries, Queen Titania and Cat sìth.

What really makes "Wolfwalkers" Oscar material, though, is its animation. This is my first experience with Cartoon Saloon, and holy hell did the studio make a wonderful first impression on me. It's no wonder the studio has been nominated for four Academy Awards. Guess who it has lost to each year? Go on. Take a wild guess. Disney and Pixar, apparently, the only animation studios the Academy of Motion Picture Arts and Sciences are aware of.

Cartoon Saloon and Mélusine Productions knocked it out of the park with this amazing display of traditional 2D animation.

I'm capable of admitting Pixar and Disney put out quality animation, really cool stuff. I had zero issues with the art in "Toy Story 4," (aside from the fact it beat "Missing Link" for best animated feature at the Oscars). But I'll take 2D animation over 3D CGI just about any day. Same goes for stop motion animation. I think the older styles show more heart and emotion.

And "Wolfwalkers" has so much heart and creativity. I must have vocalized my love for the style of this movie three or four times while it played. The animation looked like woodblock art, and the way the action would split into two, or even three, screens to show different perspectives at key moments of the film really wowed me.

Everything was just so fluid and beautiful, from the blowing trees to Mebh's mane of wild red hair as she whipped between townspeople and darted up castle walls in a flurry of action. I fell deeply in love with this movie's art.

Perhaps what I adored most was how the artists left in some sketch lines on some of the wolves and background shots. I love when sketch lines are left in animated work. The sketchier, the better.

The voice acting was solid, the artwork was breathtaking, and the story was captivating. All that's left for me to write about is the underlying themes of the movie.

Before you're one-third into "Wolfwalkers," you'll recognize the English are the bad guys. The Irish clearly don't want them in Kilkenny. They're an occupying force oppressing the people. And while Irish and English tension is palpable, what really boiled my blood was the religious undertones.

Cromwell becomes an increasingly unhinged Christian archetype as the movie races toward its conclusion. He views himself as a humanitarian bringing merciful salvation to the "savages," who are so fortunate he has come to impose his strict religious rule upon them (we're touching on another bias of mine I'll let you read between the lines on).

Blind authoritarianism to the "lord commander" reeks from this movie like moldy cheese. The writer, Will Collins, knew exactly what he wanted to say in his not-so-subtle commentary. Several times throughout the film, Robyn is told to "obey the rules," especially if she wants to remain with her (maddeningly irresponsible) father and not be locked up in the stockade.

But what do the wolves and magic Mehb and her mother represent? They're remnants of pagan magick Cromwell despises and wants to bring under his heel. He hates the wolves for defying him and his orders. He looks down upon the Irish people that rebel against him. His superiority complex and constant use of "God wills it!" make him a useful villain, but not a great one. Cromwell gets the job done, and the final climax with his army taking on the wolves had me on the edge of my seat.

If I had one complaint with the movie, and only one, it's the ending. I feel like the story would have been stronger, given all the terrible things Sean Bean's character had done, if he'd sacrificed his life protecting Robyn in the end. Then I wanted Mehb's mother, Moll (matriarch of the wolf pack), to adopt Robyn into the wolf pack.

It would have completed her evolution from "townie," suffocating under the rules of burdensome authoritarian and religious rule, to newly freed wolfwalker, truly happy and independent of prior shackles, due to her status as a girl in a patriarchal and militaristic society.

"Wolfwalkers" opens tonight at Cinemark theaters in Little Rock, Benton and Conway. It'll also open at Malco theaters in places like Jonesboro, Fort Smith and Fayetteville. If you feel safe wearing a mask and heading to the theater, this is a must-see film for animation mavens like myself.

For everyone else, you can stream it at home on Apple TV+ starting Dec. 11. It's a perfectly family-friendly movie. There's no blood or cursing I can recall.

Now I wait for "Soul" to drop on Disney+. I'm pretty sure I'll still like "Wolfwalkers" more, but that won't stop the Academy of Motion Picture Arts and Sciences awards to Pixar by default next year. I'm not the only one with bias.