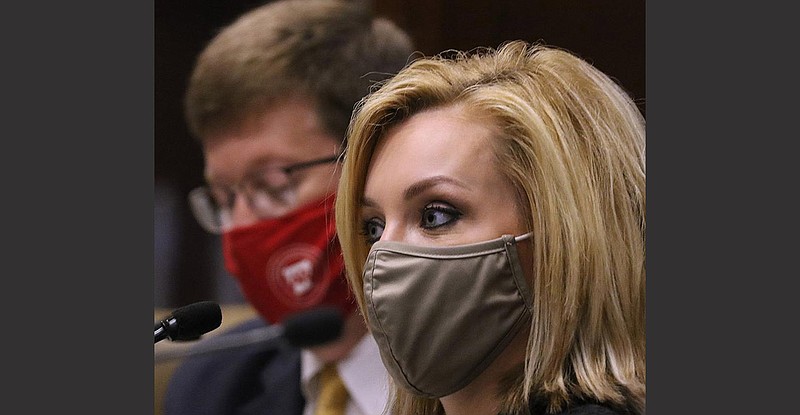 State lawmakers on Thursday quizzed state Department of Education officials about assistance for public schools and teachers amid the covid-19 pandemic, teachers' salaries, professional development for teachers and other matters.

The Legislative Council and Joint Budget Committee held a hearing Thursday on the Department of Education's proposed budget for fiscal 2022 that starts July 1.

The hearing came two days after Gov. Asa Hutchinson unveiled his proposed $5.84 billion general revenue budget for fiscal 2022 for what that he said includes "the largest increase in education in more than a decade," and "allows room for another round of tax cuts."

The governor's proposed budget would increase the general revenue budget for the public school fund by $30.5 million, to $2.53 billion in fiscal 2022. That would be supplemented by $80 million currently in the fund, said state budget director Jake Bleed.

Asked about Hutchinson's comment about the largest increase in education in more than a decade, Department of Finance and Administration spokesman Scott Hardin said this week that remark is based on the proposed increases in per student foundation funding for the public schools from $7,018 in the current fiscal year 2021 to $7,182 in fiscal 2022, a 2.34% increase, and to $7,349 in fiscal 2023, a 2.33% increase.

The increases reflected the recommendations of the House and Senate Education committees, which every two years conduct a study to determine what is needed to provide an adequate education to students in the public schools.

Key said the governor's proposed budget doesn't include anything "extra for the pandemic."

The department is in the process of distributing more than $120 million to school districts that the state received from the federal CARES Act, he said. The CARES Act stands for the Coronavirus, Aid, Relief and Economic Security Act signed by President Trump in March.

"Likewise, if we see another relief package that comes from Congress, we are trying to make sure that we have sufficient federal appropriation to address that, so that as soon as the dollars hit the state treasury then we can turn around and get those out to school districts," Key said.

Sen. Linda Chesterfield, D-Little Rock, said she has heard reports that about a dozen educators have died due to covid-19, and asked Key whether there is "some hazardous pay" in the governor's proposed budget.

In turn, Chesterfield, who is a retired teacher, asked "so there is no recognition that this [covid-19] is something totally different than anything we have had ever to deal with in education before in this budget."

Key replied, "I think the recognition is in the flexibility that we have provided with how districts can spend their dollars that they are getting."

Chesterfield said that "if they put their lives on the line, we need to be thinking about what we can do to help families who lose loved ones as a result of this pandemic."

Key said he is aware that the Arkansas Teacher Retirement System provides death benefits, but he doesn't know the details of those benefits.

Sen. Kim Hammer, R-Benton, asked Key about how much in federal coronavirus relief funds hasn't been spent out of the $20 million set aside to assist teachers who miss school because of covid-related illnesses.

"It is a little over $10 million as of the latest report," Key said.

Hammer noted that "we redirected some of the money to go to" to reimburse some school districts' food service accounts.

Making reference to Chesterfield's suggestion of providing aid to families who lose educators due to covid-19, Hammer said Key might consider making accommodations in some way for families who have educators who died from covid-19 when the infection originated in the school.

Sen. Will Bond, D-Little Rock, said he has proposed to the CARES Act steering committee the use of federal coronavirus relief funds for health and safety bonuses for teachers.

"If the money was available, does the Department of Education, the secretary of education support some form of health and safety bonuses for teachers from CARES Act funding," Bond asked Key.

Key responded that "we always are looking for ways to help our teachers, Senator Bond."

Then, Bond pressed him for a direct answer to his question.

Key replied, "I would certainly as secretary not want to get out in front of the governor on anything that important."

Both, Bond and Key serve on the 15-member CARES ACT steering committee appointed by Hutchinson.

Earlier in the lawmakers' hearing on the department's budget, Bond said "I am convinced that we all sort of agree or most of us that we want to have higher teacher salaries."

He asked Key about whether the state Department of Education has a target of leading the region or surrounding states in teachers' salaries or are "we just kind of trying to be all right."

In response, Key said that Gov. Hutchinson's goal heading into the 2019 session "was to be among the highest in the surrounding states with respect to the minimum teacher salary."

"The one thing that we can't control is what other legislatures do in our surrounding states and what we have seen that is they are also trying to raise the bar for salaries," Key said.

He said the state's general goal is to be among the leaders in the region and "at some appropriate level" among the states in the Southern Regional Education Board.

"That is something that the governor has asked me to continue to look at," he said. "I am providing him information. ... We have tackled minimum salaries."

The state's minimum teacher salary was constant from 2009-2014 and has increased in each session since Hutchinson became governor in 2015, Key said.

"But now we are looking to how we can we move the average teacher salary," he said. "You are going to move a little bit by changing the minimum, but what can be a bigger push to move that average and that is something that [the governor] has tasked me with providing him."

Bond said he wants to know what it would cost to raise the average teacher salary in Arkansas to lead the region.

In 2019, Arkansas' average teacher pay totaled $49,438 a year to rank 46th among the nation's 50 states based on information from the National Education Association, according to a Bureau of Legislative Research teacher salary report in June to the House and Senate education committees.

"I hope it as good as everybody says it is, but we still don't have any concrete data indicating what it does," Chesterfield said. "When I asked for performance evaluations, I got a lot of rah, rah. ... I need some objective data that all this investment in Solution Tree is making a huge difference for the populations it is supposed to be serving and I don't have that yet."

Key said the department received a report this week from an independent third party, Education Northwest, to evaluate a cohort of students that participated in the program. After two years, Solution Tree's Professional Learning Communities at Work is having a positive impact on achievement growth in Arkansas of these students, particularly in math, according to the report.

At least a few schools have increased their grades from an F to a C based on their participation in the program, and some participating districts are continuing to show strong growth in their students' achievement, he said.