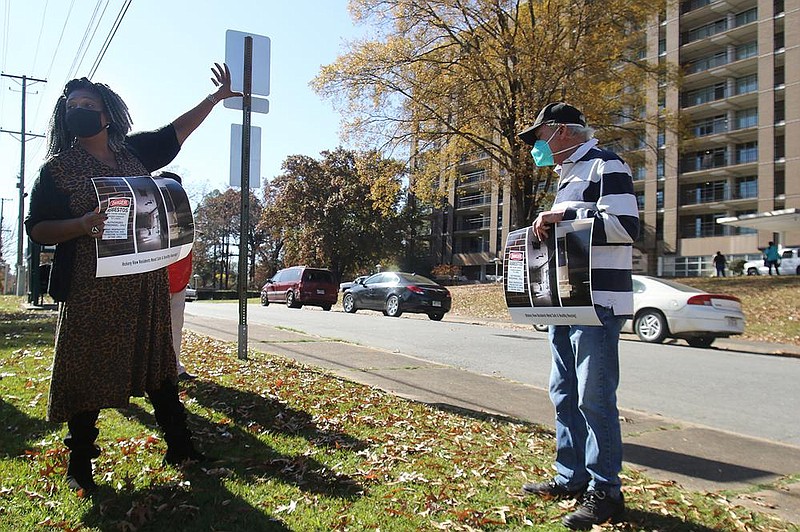 Hattie Temple talks about problems at the Heritage House apartments as Neil Sealy, with Arkansas Renters United, looks on outside the building Thursday in North Little Rock. (Arkansas Democrat-Gazette/Thomas Metthe)

The Hickory View apartment renovations aren’t working for residents — that was the message a group of tenants delivered in a news conference Thursday in front of the publicly funded North Little Rock apartment building.

Tenants complained that in recent months, as they’ve moved into apartments at the 171-unit tower that have been renovated under the federal Rental Assistance Demonstration program, safety equipment such as grab bars in showers and emergency call buttons aren’t widely available, but water leaks, bedbugs and mold are near-constant presences.

Hattie Temple, 56, has lived at the tower for five years and spoke at the news conference. She said that before the renovations, she loved her home. She lives on one of the highest floors and can see the city from her apartment.

Now, she said, she worries about her elderly neighbor who no longer has hand rails in her shower. She said many tenants are afraid to shower because of the risk of falling. She also said there are frequent water leaks and she’s had water soaking from her bathroom to the living room.

“It’s just got to be too much,” Temple said.

The developments no longer serve as traditional public-housing projects, but become part of the Project-based Section 8 program, which gives each tenant a rental voucher to help with payments. Tenants pay 30% of their incomes to rent under the program.

The U.S. Department of Housing and Urban Development’s funding to housing authorities has declined for years, contributing to disrepair of many public-housing facilities. North Little Rock is the oldest housing authority in the state, and some of its buildings were constructed in the 1940s.

In 2012, the North Little Rock Housing Authority decided to participate in the federal program, and Hickory View – formerly known as Heritage House — was one of eight properties selected to undergo the renovations.

On its website, BGC estimates the combined cost of renovations for Hickory View and Cedar Gardens, formerly known as Stephen W. Bowker Apartments, at nearly $34 million in various funds.

The housing authority inspects units regularly to ensure they meet federal standards — when a tenant moves in, once a year and anytime there is a complaint — and pays its portion of the rent.

“We manage the rental assistance,” Snow said. “We don’t manage the property, and we are not involved in the management of property, but we are concerned about the tenants.”

The plans have been reviewed and approved by all involved city, state and federal agencies, BGC chief executive officer Holly Knight said in a written statement.

“The ultimate goal for this renovation is to modernize the units while providing quality of life enhancements for all residents, including an additional elevator and community rooms,” Knight said. “As the process for completing these renovations continues, it is important to note that any and all concerns communicated to us by residents and resident councils will be responded to directly and in a timely manner.”

Knight added that the company wasn’t aware of any mildew complaints. The company manages bedbug infestations on a case-by-case basis. She said shower bars are available in 18 units, and more can be requested through the reasonable accommodation process.

The call buttons weren’t staffed 24/7, Knight said. Therefore, the company felt that the aging and “unreliable technology could actually put our residents at risk.”

All units previously had grab bars in the showers because most residents were disabled or senior citizens. Now, the management company must have the accommodations in 5% of units, and anyone who requests should be able to get them, Snow said.

The company says it has grab bars in more than the required 5% of units.

Chandra Profit, 60, who was among three tenants who spoke at the news conference, said she had to switch apartments earlier this year because of bedbugs. And in her new unit, water leaks have caused mold, she said. She also wants her old handrail back in the shower because she frequently gets dizzy spells and is afraid of falling.

“We’re asking to be treated like human beings,” she said Thursday.

Profit said she was living at Paris Towers in Little Rock when it underwent similar renovations and didn’t like those either, so she was wary of what might happen at Hickory View in North Little Rock.

Neil Sealy, a community organizer with Arkansas Renters United, helped set up the news conference. He said his group has gotten calls from Hickory View tenants complaining about conditions.

He said many of the issues stemmed from a lack of communication with residents.

“Without really bringing in the tenants, it just doesn’t work,” he said about the federal program.

Snow said the housing authority had frequent meetings with tenants about the renovations until residents “were exhausted about the meetings.”

Knight said the company had a tenant meeting Monday.

“We believe that while change is always difficult, transparency builds trust,” she said.

Tenants said they didn’t know about many changes and weren’t given enough opportunity to tell management what they wanted in their homes.