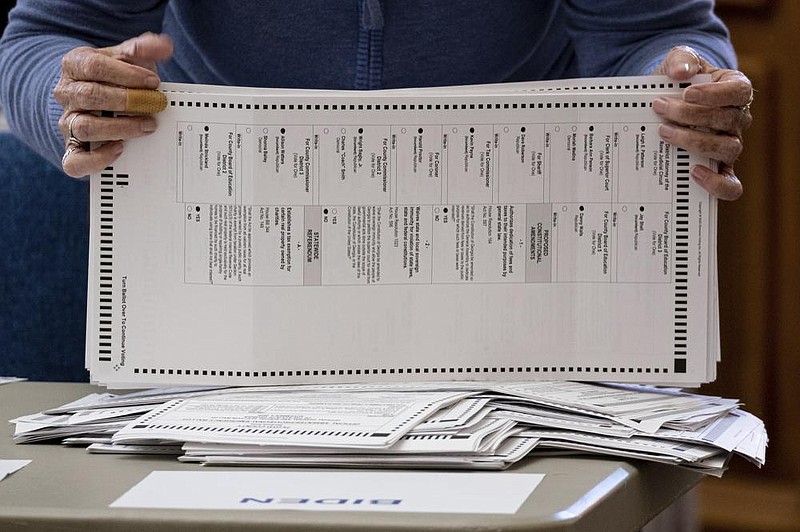 An official sorts ballots Friday during an audit at the Floyd County administration building in Rome, Ga. The secretary of state’s office has instructed county election officials to complete the audit by 11:59 p.m. Wednesday. The deadline to certify the results is Nov. 20. (AP/Ben Gray)

ATLANTA — Masked election workers in teams of two began counting ballots Friday in counties across Georgia, a hand tally of the presidential race that stems from an audit required under a new state law.

The law requires that one race be audited to check that new election machines counted the ballots accurately, not because of any suspected problems with the results. Secretary of State Brad Raffensperger chose to audit the presidential race and said the tight margin — Democrat Joe Biden leads Republican President Donald Trump by roughly 14,000 votes — meant a full hand count was necessary.

Meanwhile, NBC News networks projected that Biden will win the presidential election in Georgia and Trump will win in North Carolina, the last two state races to be called. ABC News also projected Biden as the winner in Georgia.

If those projections hold true, that would give Biden 306 electors, above the 270 needed to win, and Trump 232.

Across Georgia, audit teams worked with batches of paper ballots, dividing them into piles for each candidate, before counting each pile by hand. Bipartisan panels were on hand to review certain ballots, including those where the auditors couldn’t agree on the voter’s intent and those with write-in candidates.

Monitors, appointed by local Democratic and Republican parties, were allowed to circulate among the auditing stations but could not touch ballots or record anything. News media and members of the public were also allowed to observe but were required to do so from a designated area.

The Carter Center is also sending monitors to watch the recount in Georgia.

The nonprofit said Friday that Carter Center monitors will go to a number of counties across the state to assess the postelection audit and related processes to help bolster transparency and confidence in the results.

“Because the margin in the presidential race is so close, this sort of audit essentially requires review of every ballot by hand,” said Paige Alexander, the Carter Center’s CEO. “This is unusual, but it provides an opportunity to build trust in the electoral system prior to the state’s certification of results.”

The Carter Center’s effort is limited to Georgia’s post-election audit of the presidential race and is not part of a broader assessment of the election as a whole.

In Cobb County, in Atlanta’s suburbs, several dozen audit teams sat at tables in a large room at an event center in Marietta as they began counting absentee ballots. One auditor picked up a ballot, read the candidate’s name aloud and then passed it to the other auditor, who also said the name before placing the ballot in a tray marked with the candidate’s name.

As they worked, the room was quiet aside from the shuffling of papers and auditors saying, “Trump” or “Biden.”

A similar scene occurred across Georgia’s 159 counties as the count of nearly 5 million votes got underway.

At the Chatham County board of elections annex, a cavernous warehouse on the south side of Savannah, about 60 auditors wearing masks listened as a supervisor ran through how the process would work, then watched a training video before beginning the count a little after 10 a.m.

At the Floyd County administration building in Rome, in north Georgia, pairs of masked auditors sitting at eight plastic folding tables were sworn in at 9 a.m., and the ballots arrived a few minutes later.

Some counties used Friday to set up before beginning their counts today.

In Fulton County, the state’s most populous, a 110,000-square-foot space at the Georgia World Congress Center in downtown Atlanta was being prepared for 125 two-person teams, elections director Rick Barron said during a video news conference.

The county has 528,777 ballots to be recounted, Barron said, adding that he estimates it will take the teams two or three days to finish if they work from 7 a.m. to 5 p.m. daily.

The county elections department has been hard hit by the coronavirus. Two people in the absentee ballot section were infected in the spring, before the primary election, including one who died. An additional 26 workers in a warehouse where election equipment is prepared and supplies are stored tested positive last month.

That was on their mind as they planned the space for the audit, Barron said.

The secretary of state’s office has instructed county election officials to complete the audit by 11:59 p.m. Wednesday. The deadline for the state to certify the results is Nov. 20.

Even as the count began, Raffensperger was self-quarantining as a precaution after his wife tested positive Thursday for the coronavirus. Deputy Secretary of State Jordan Fuchs said Raffensperger tested negative for the virus and that the secretary’s quarantine will not affect the audit.

The audit is part of a 2019 law that also set out guidelines for the purchase of a new $100 million election system from Dominion Voting Systems. It was up to the secretary of state to choose the race, and Raffensperger said the presidential race made the most sense because of its tight margin and national significance.

The final numbers in the audit count will almost certainly differ from the numbers previously reported by the counties, but the overall outcome should remain the same, said Gabriel Sterling, who oversaw the implementation of the state’s new voting system for the secretary of state’s office.

The results will not be released piecemeal as the counties finish counting but will be announced once the full tally is complete, he said, adding that the result of the audit is what will be certified.

Meanwhile, a federal appeals court in Philadelphia on Friday rejected an effort led by a Republican congressional candidate to block about 9,300 ballots that arrived after Election Day.

Smith said the panel sought to uphold “a proposition indisputable in our democratic process: that the lawfully cast vote of every citizen must count.”

The ruling involves the Pennsylvania Supreme Court’s decision to accept mail-in ballots that arrived by Nov. 6, three days after the close of polling places. That court had agreed with Democratic state officials who wanted to extend the deadline amid concerns about Postal Service delays and the pandemic.

State Republicans have separately asked the U.S. Supreme Court to review the issue. However, there are not enough late-arriving ballots to change the results in Pennsylvania, given Biden’s lead. The Democratic former vice president won the state by about 60,000 votes out of about 6.8 million cast.

Separately, 16 assistant U.S. attorneys specially assigned to monitor malfeasance in the 2020 election urged Attorney General William Barr on Friday to rescind his recent memorandum allowing investigators to publicly pursue allegations of “vote tabulation irregularities” in certain cases before results are certified, saying they had not seen evidence of any substantial anomalies.

In a letter, the assistant U.S. attorneys told Barr that the release of his Monday memorandum — which changed long-standing Justice Department policy about the steps prosecutors can take before the results of an election are certified — “thrusts career prosecutors into partisan politics.”

The signers wrote that in the places where they served as district election officers, taking in reports of possible election-related crimes, there was no evidence of the kind of fraud that Barr’s memo had highlighted. Barr’s memo authorized prosecutors “to pursue substantial allegations of voting and vote tabulation irregularities prior to the certification of elections in your jurisdictions in certain cases,” particularly where the outcome of an election could be affected.

“The policy change was not based in fact,” the assistant U.S. attorneys wrote.

Asked for comment on the assistant U.S. attorneys’ assertions, Kerri Kupec, a Justice Department spokesman, said, “Perhaps they did not read the memo,” and pointed to a section in which Barr urged caution and noted, “Nothing here should be taken as any indication that the Department has concluded that voting irregularities have impacted the outcome of any election.”

On Friday, Trump responded to the Cybersecurity and Infrastructure Security Agency’s assertion that the Nov. 3 election was “the most secure in American history.”

He tweeted Friday that Democrats have complained for years about unsafe elections but “now they are saying what a wonderful job the Trump Administration did in making 2020 the most secure election ever.”

“Actually this is true, except for what the Democrats did. Rigged Election!” Trump tweeted.

Also Friday, White House press secretary Kayleigh McEnany said Trump is “not even at that point yet” when it comes to conceding to Biden.

McEnany told Fox Business News that Trump believes he will be president and have a second term.

When told it would look sad if he did not attend the inauguration on Jan. 20, McEnany said, “I think the president will attend his own inauguration. He would have to be there in fact.”

McEnany continued to raise allegations of voter fraud and maintained that “when every legal vote is counted” Trump would win.

Information for this article was contributed by Kate Brumback, Mike Stewart, Stephen B. Morton, Ben Gray, Maryclaire Dale, Mark Scolforo, Eric Tucker, Frank Bajak and staff member of The Associated Press; by Ryan Teague Beckwith of Bloomberg News; by Christopher Quinn of The New York Times; and by Matt Zapotosky and Tom Hamburger of The Washington Post. 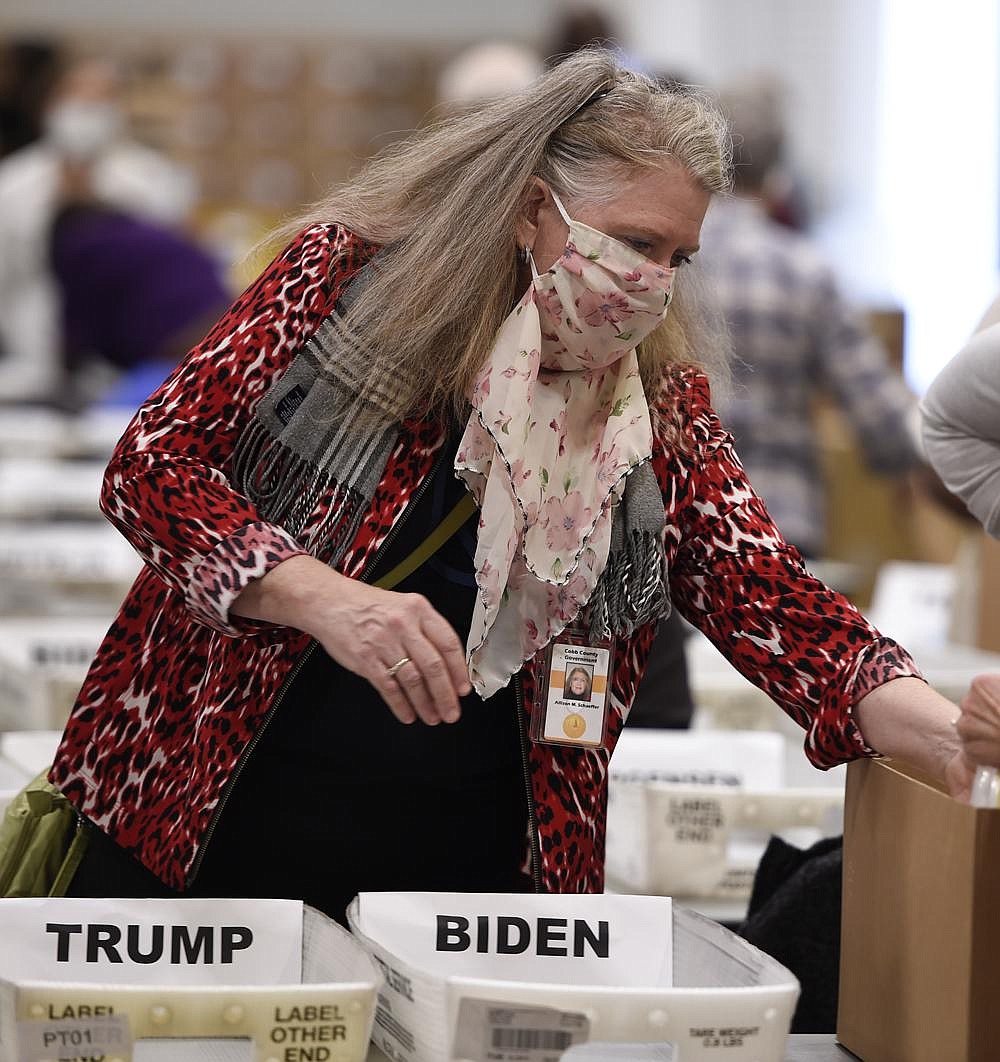