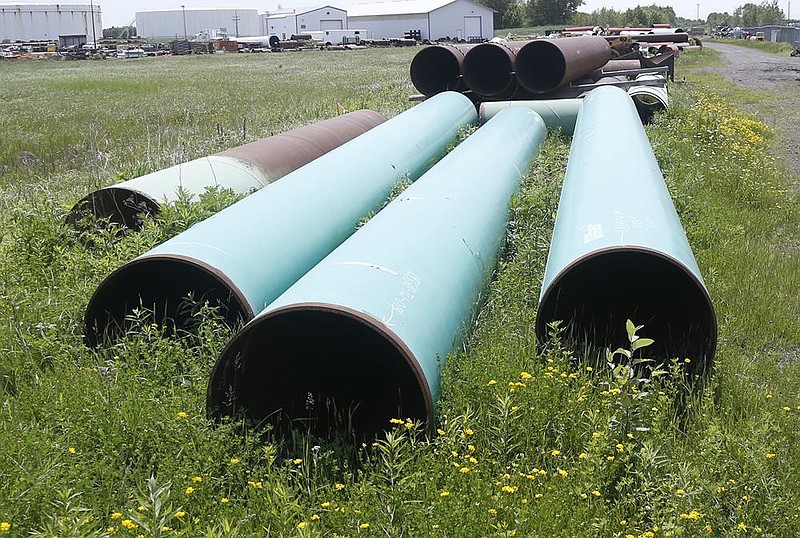 Sections of pipe used to carry crude oil are shown at the Superior, Wis., terminal of Enbridge Energy in 2018. Michigan is seeking to revoke a 1953 easement that allows Enbridge to operate under the Straits of Mackinac between Lake Huron and Lake Michigan. (AP/Jim Mone)

Whitmer’s office notified Canadian company Enbridge Inc. that it was revoking an easement granted 67 years ago to extend a roughly 4-mile section of the pipeline through the Straits of Mackinac. The revocation takes effect in 180 days, when the flow of oil must stop.

“Enbridge has routinely refused to take action to protect our Great Lakes and the millions of Americans who depend on them for clean drinking water and good jobs,” the Democratic governor said in a statement. “They have repeatedly violated the terms of the 1953 easement by ignoring structural problems that put our Great Lakes and our families at risk.

“Most importantly, Enbridge has imposed on the people of Michigan an unacceptable risk of a catastrophic oil spill in the Great Lakes that could devastate our economy and way of life.”

Enbridge said there was “no credible basis” for Whitmer’s action.

“Line 5 remains safe, as envisioned by the 1953 easement, and as recently validated by our federal safety regulator,” said Vern Yu, the company’s president for liquids pipelines.

Line 5 is part of Enbridge’s Lakehead network of pipelines that carries oil from western Canada to refineries in the U.S. and Ontario. The pipeline carries about 23 million gallons of oil and natural gas liquids daily between Superior, Wis., and Sarnia, Ontario, traversing parts of northern Michigan and Wisconsin.

The underwater section between the Straits of Mackinac, which connects Lake Huron and Lake Michigan, is divided into two pipes that are 20 inches in diameter. Enbridge says they are in good condition and have never leaked. Environmental groups contend they’re vulnerable to a catastrophic spill.

Enbridge reached an agreement with then-Gov. Rick Snyder, a Republican, in 2018 to replace the underwater portion with a new pipe that would be housed in a tunnel to be drilled through bedrock beneath the straits.

The company is seeking state and federal permits for the $500 million project, which is not affected by Whitmer’s shutdown order.

Environmental activists, native tribes and some elected officials began pushing to decommission Line 5 after another Enbridge pipe spilled at least 843,000 gallons of oil in the Kalamazoo River in southern Michigan in 2010.

Pressure grew as the company reported gaps in protective coating and installed supports when erosion opened wide spaces between sections of pipe and the lake bed.

An anchor dragged by a commercial tug and barge dented both pipes in April 2018. One of the pipeline supports was damaged this summer, apparently by a boat cable.

In a termination notice, Whitmer’s office said the easement should not have been granted in 1953. Placing the pipes beneath a busy shipping lane, with no cover to protect from anchor strikes, violated the state’s duty to protect the public’s interest in Great Lakes waters and bottomlands, the document said.

It referred to a Michigan Technological University report that warned that the straits’ swift currents could propel oil over vast distances, potentially damaging fish populations and hundreds of miles of beaches, dunes and wetlands.

The notice said Enbridge repeatedly violated a requirement that the pipelines rest on the lake bed or have other supports at least every 75 feet. Spaces exceeding the threshold have been detected as far back as 1963 and most were never dealt with, it said.

Enbridge has repeatedly defended its operation of the pipeline, saying the coating gaps posed no serious threat. It has installed more than 120 supports to improve stability and stepped up patrols and other measures to prevent anchor strikes.

The company says shutting down Line 5 would cause shortages of crude oil for refineries in Michigan, Ohio, Pennsylvania and eastern Canada, as well as propane shortages in northern Michigan. It also would boost shipments of oil by rail or truck, Enbridge says.

Environmental groups contend there are other means of meeting those demands but that closing Line 5 should be part of a global effort to curb use of climate-warming fossil fuels.

Democratic Sen. Gary Peters, a member of the Senate committee that oversees the U.S. Pipeline and Hazardous Materials Safety Administration, endorsed Whitmer’s move and said he would work with officials “to swiftly evaluate alternatives to Line 5 while continuing to hold Enbridge accountable.”