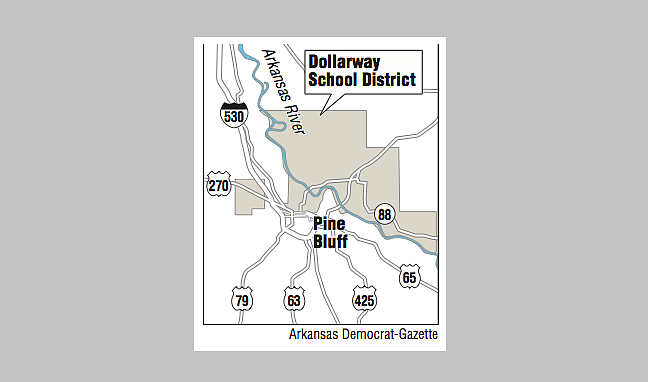 The location of the Dollarway School District is shown in this 2015 graphic.

The Arkansas Board of Education has four options regarding the future governance of the Dollarway School District as it approaches a fifth anniversary under state control and a deadline for state action, consultants and state leaders said Friday.

The options for the 921-student district, which is north of the Pine Bluff School District, include returning Dollarway to a locally elected school board, if the system has met the exit criteria for correcting the academic problems that resulted in the state takeover of the system in December 2015 and a label of fiscal distress that followed in April 2016.

Short of that, the Education Board by law must either reconstitute a district under state control for five years, annex it to make it a part of another existing district, or consolidate it with another district to create an all new district.

In the case of Dollarway, consultants and state leaders told the state Education Board on Friday, all planning for annexing or consolidating the district focused on the Pine Bluff district, which is also under state control for academic and financial problems, and under the direction of the same state-appointed superintendent, Barbara Warren.

Additionally, they said, the establishment of a new consolidated district would have the effect of removing both Dollarway and Pine Bluff from state control, at a time when Pine Bluff is expected to remain in state control for two more years.

The Comprehensive Center Network, Westat and WestEd national organizations joined with the state's Office of Coordinated Support and Service to make Friday's 154-page presentation to the Education Board. The 3½-hour session covered efforts for improvement that are underway in Dollarway, the district's financial plight and descriptions of the available options for future governance.

Stacy Smith, director of the Office of Coordinated Support and Service, told the Education Board said there are good strategies, committed teachers and strong leadership in place in the Dollarway district.

"Can I point to many, many good things that are very supportive of teachers in the Dollarway School District? I absolutely can," Smith said. "Can I stand before you today after visiting all the schools and interviewing lots of teachers and high school students and say that the academics in every classroom is at a high level where it needs to be? It's not," Smith said. "There's lots of work to be done."

Consultants Jason Willis, Lauren Outlaw and Felicia Reed described for the board their review of state laws and Education Board rules regarding districts in state takeover and school district finances.

The consultants conducted small group stakeholder meetings Oct. 5-21 to solicit from the almost 40 Dollarway students, parents, teachers and community members who responded to invitations to participate their concerns and what they value about the district and its future. Another round of stakeholder sessions will be held in the coming days to get reaction to the different governance options.

The process on deciding Dollarway's future has been dramatically different from last year's process for determining how to release the much larger Little Rock district from state control. That process, which didn't involve the consultant groups, resulted in raucous public forums, angry crowds at Education Board meetings, calls to the governor, the end to employee union recognition and a one-day teacher strike.

The Little Rock district is to be released with some limitations shortly after Dec. 1 runoff elections are held for two of the seats on a new nine-member school board.

The Dollarway district did not seem likely to receive a recommendation for a return to a locally elected school board from the Arkansas Division of Elementary and Secondary Education.

The Dollarway district overall averaged a 2.64 score, Smith said. That was short of a desire to see the schools meet criteria with little or no state support -- with an average score of 3.5 to the highest rating of 4.

The indicators covered the use of a curriculum and instructional strategies, evidence of teacher evaluations and the ability for teachers to work together collaboratively in professional learning groups, for example.

The first two years of the five years of state control focused on improving the district's climate and culture for learning, which was important but left a shorter time for the work on academics, Smith said. She also noted that the district -- which spends a higher-than-state average $16,080 per pupil at its three campuses -- is hampered by teacher turnover. More than 37% of the district's teachers have three or fewer years of teaching experience.

Dollarway was labeled as being a district in fiscal distress in 2016 because of as many as 19 audit findings in the financial operation and because of a yearly practice of spending reserves to meet expenses. Smith said the recent state audits of the district reveal very few problems but that the declining year-end balances remain an issue in a district that has lost enrollment over time.

"We have not reversed our deficit spending in the Dollarway School District and our final balance does continue to decline," Smith said, adding that the district is going to have to cut its expenses significantly for 2021-22 to balance its budget.

Arkansas Education Secretary Johnny Key noted that those cuts will have to reduce staffing in a system where 80% of expenses are for salaries and benefits.

Willis, one of the consultants, focused on the financial and operational aspects of each of the return to local control, reconstitution, annexation and consolidation options.

He provided estimates are savings that could be realized by combining central office staffs and school bus routes, the impact on property tax rates and various ways a school board could be formed, including an appointed board or a mix of an appointed and elected board.

Combining middle schools and high schools in the Dollarway and Pine Bluff districts was held out as a possible efficiency in an annexation or consolidation of the districts.

Also taken into consideration in the scenarios were state incentive dollars provided to combining districts as well as the sale of unused Dollarway properties.

The reconstitution option for the Dollarway district as developed by Willis entails merging the district's central services with that of Pine Bluff as a way to cut costs and redundancies, as well as provide additional services and programs to attract and retain students. The plan envisions a school board made up equally of elected, state-appointed and University of Arkansas at Pine Bluff faculty members.

The plan allows for the slow transition from state control to build capacity at the local level, Willis said.

Annexation of the Dollarway district into Pine Bluff would make available one time incentive money of $2.15 million in 2021-22 and $1.08 million in 2022-23. Additionally, money generated for the Pine Bluff School District by the new Saracen Casino would benefit the former Dollarway system.

In the case of consolidation of the Dollarway and Pine Bluff districts, a new board would have to be elected after July 1 next year, Willis said. The state's role would be to appoint an interim board until a new board can be elected. The new district would benefit from state merger incentive money and revenue generated by the new casino.